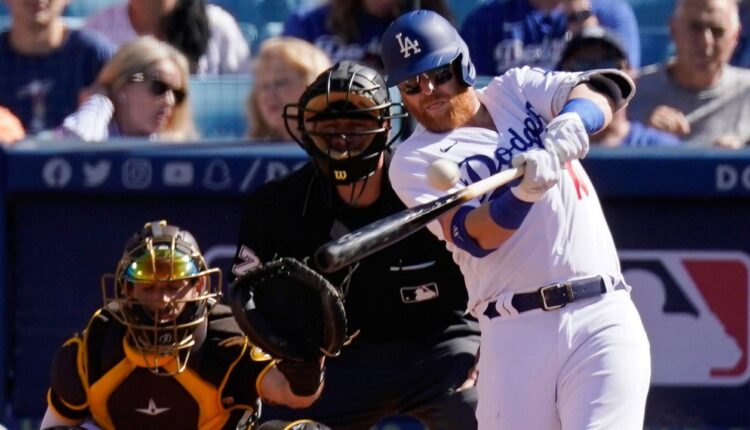 LOS ANGELES (AP) — Freddie Freeman, Will Smith and Justin Turner homered during a seven-pitch span in the first inning, Tyler Anderson struck out six and the Los Angeles Dodgers continued their dominance of the San Diego Padres with a 7-2 victory Saturday.

Freeman, Smith and Turner all connected for solo shots off Padres starter Yu Darvish (7-4). It was the third time this season they had three homers in an inning.

Anderson (9-1) allowed one run on six hits and struck out six in 6 1/3 innings to become the third NL pitcher to reach at least nine wins. Teammate Tony Gonsolin picked up his league-leading 10th on Friday night.

The Dodgers have won 14 of their last 15 against the Padres since getting swept in a three-game series last June in San Diego. They go for their first four-game sweep against the NL West rivals since 2009 on Sunday.

Luke Voit had two hits, including a solo shot in the eighth inning for the Padres, who dropped three straight and six of their last seven to fall 4 1/2 games behind the Dodgers in the division.

Freeman lined Darvish’s slider over the right field wall with one out in the first for his 10th of the season and second in the last four games. Two pitches later, Smith hit his 13th when he hit a cutter to right-center that was just beyond the reach of Padres right fielder Jose Azocar.

After Max Muncy flew out to deep center, Turner hammered a fastball down the left-field line for his third homer in the series and seventh of the year.

Los Angeles added runs in the second and third on Trea Turner’s RBI single and a double by Jake Lamb to score Turner.

Darvish went six innings, the eighth straight time he has thrown six innings or more. The right-hander allowed five runs and eight hits and struck out 10. It was only the second time in eight career starts against the Dodgers Darvish allowed more than two runs.

The Padres got on the board in the seventh. Austin Nola led off the inning with a base hit, advanced to third on Ha-Seong Kim’s single and scored on Trent Grisham’s sacrifice fly to make it 5-1.

The Dodgers countered with a pair in the home half on sacrifice flies by Muncy and Turner.

Padres: Manny Machado (left ankle sprain) started at third base for the first time since June 18 and was 1 for 4. He was the designated hitter on Thursday after missing nine games due to a left ankle sprain and came on as a pinch- hitter during the eighth inning Friday before remaining in the game at third. … C Jorge Alfaro (right knee inflammation) returned to the lineup as the designated hitter after not starting the past four games. He went 0 for 3.

Dodgers: RF Chris Taylor left in the sixth inning due to a left foot contusion. … Mookie Betts (ribs) is on track to be activated either Sunday or Monday after taking at-bats in a simulated game. Manager Dave Roberts said Betts will begin at second base before moving back to the outfield. … P Caleb Ferguson (left forearm tendinitis) is on track to return next week after he threw one inning in a simulated game.