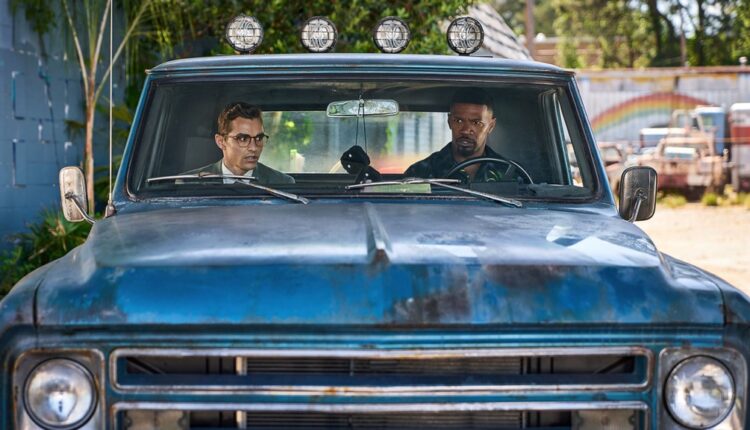 If you’ve been following big budget action films over the past ten years, you’ve probably seen JJ Perry’s handiwork. Known for his stunt work on films like the John Wick series and the Fast and Furious franchise, the stunt coordinator turned second-unit director is now making his directorial debut with the Netflix action-comedy Day Shift.

Set in Los Angeles’ San Fernando Valley, the film stars Jamie Foxx as a hardworking dad in need of some quick cash to provide for his daughter. His job? Hunting and killing vampires.

“Getting this movie was a big win, but getting Jamie Foxx was like winning the biggest lottery in the history of lotteries,” Perry tells The Hollywood Reporter of scoring Foxx for the lead role. “For me, it changed everything. I thought somebody was putting him up to it when he called me.”

The pair worked briefly together on Quentin Tarantino’s Django Unchained, where Foxx starred as the titular gunslinging bounty hunter, and Perry served as a stunt performer on the film. After discovering they’re both from Texas, they hit it off right away.

“I want to be Jamie Foxx so bad, it makes my damn teeth hurt,” Perry says with a laugh.

With a martial arts background dating back to childhood — he got his black belt in Tae Kwon Do at the age of 12 — Perry never intended to join the Hollywood scene. Before working in film, he was enlisted in the United States Army. After his military service ended, he fell into a career in stunts, with future John Wick filmmaker Chad Stahelski as among his early pals in the industry.

In a conversation with THR, the Day Shift director reveals the fight idea he has wanted to use for years (“I actually tried to pitch this to the last 35 or 40 directors that I’ve worked with,” he says), and why he doesn’t expect to see stunts get an Oscars category.

Within the first minutes of the film, there’s an intense action sequence before any dialogue is exchanged. It really sets the tone for the rest of the movie, and also for your style as a director. What went into the decision to open Day Shift like that?

When I first got the script, it was a much smaller film. It was like an indie film. It won the Slamdance Film Festival Award for best script, but it wasn’t really an action film. I really wanted to put the audience off balance. Like, OK, you know it starts in a pool. He’s a pool cleaner. Oh, wait a minute, he’s a thief. But wait a minute, he’s a murderer. Oh, he’s a vampire killer. As a kid who had a bunch of amateur fights, I always came out swinging in the first round. My whole take on everything in life is, “He who hesitates meditates horizontally.” You just have to attack right away. That was always my vision is to really come out swinging and get my hook in the audience right away.

And having vampires in the mix adds a whole new element to the fight sequences because the Day Shift vampires can bend their bodies every which way. How fun was it to direct those scenes?

I have done so many action movies in the last 32 years. I’ve been a stunt coordinator, a second unit director. You’re always trying to help other directors realize their vision of the action. I stumbled upon this reverse photography with contortionists back in, like, 2014 on a movie I did in Hungary. I tried to pitch it to the director, but he wasn’t having it. I actually tried to pitch this to the last 35 or 40 directors that I’ve worked with, but they [didn’t get it.] And I was like, OK, cool.

So when my time came to actually [incorporate] contortionists and weaponize and reactionize their movements — you know, we shot the movie in 42 days in the midst of a pandemic. So we didn’t have a lot of time to put huge, elaborate makeup on the vampires. We had to choose who was going to get the most makeup and how we featured them. But I really wanted to lean into the movement in what they did. I thought that was a little bit different than what we’ve seen in other vampire films. I worked on Blade, I’ve worked on a ton of vampire films back in the day, and vampires fight like people fight, but just stronger. I wanted it to be a little bit different. We didn’t have the visual effects budget or the time to do big makeup effects, so I moved on the movement instead.

Tell me also about the trajectory from being a stunt coordinator to second unit director and now helming your own film. What was that always the plan?

When I got out of the Army, I didn’t really have a plan when I moved to LA I thought, “I’m going to be a stuntman, I’m going to try my best, and I’ll probably mess this up and end up back in the Army.” I fell into cahoots with Chad Stahelski, who is the director of the John Wick films. He was one of the first people I met when I got out of the Army. He was a budding stuntman, as well, and we were both starting out in the business.

Being a stuntman led me to becoming a fight choreographer, because as a stuntman, I would choreograph my own fights, then people would take notice. And then stunt coordinating fell right into play. As a stunt coordinator, you become a department head which kind of informs what you have to do as a director because you have to interface with all these different departments.

When did Day Shift come into the mix?

When I read the script for Day Shift, I had been getting a bunch of scripts after [working on] John Wick 2. Most of them were like, “Oh, you know, it’s a sniper with PTSD. You were in the Army, you’ll be good at that.” I was like, it’s dark. I don’t want to do that. “Well, let’s do another John Wick movie.” I said we already did that. As soon as I read Day Shift, I knew right away. It was action, comedy and horror, and those are the movies that I loved coming up as a viewer. Big Trouble in Little China, The Lost Boys, Fright Night, Evil Dead, from the mid ’80s.

These days, there aren’t as many original standalone action movies, compared to what you might remember from the ’80s or ’90s. Do you think a movie like Day Shift is perhaps a revitalization of that dying breed?

Absolutely. I chose Day Shift because it’s the world of the hunters that hide in plain sight. And then there’s the world of the vampires that hide in plain sight. Technically, when you think about vampires, they’re actually not doing anything wrong. They’re doing what they do—they eat humans. The story is really about a man keeping his family together on a collision course with a vampire boss that’s trying to seek revenge for her daughter’s murder. I knew right away — this is what I want to do because it reminds me of the movies that spoke to me the most back in the ’80s when I was a young audience member. The difference is we take a modern day approach to the action.

In your career, you’ve been nominated and won awards for your stunt work. It’s been a longtime movement to get stunts recognized by the Academy and in mainstream awards shows. What are your thoughts on the art of stuntwork in that way?

I’m an Academy member, but I would say to you that I don’t think we’ll get Academy Awards for stunts. And look, I don’t do this job for trophies. I do it because it’s a lot of fun, and it’s a business and I get to do all kinds of wild shit. I don’t ever have to grow up. I’m 54 years old. But I also think that a lot of my stunt brothers and sisters want Oscars, and I hope they get them. But my take on it is that the minute you say the stunt performer did it, you’re taking away from the actor. The minute you say a stunt coordinator choreographed or did the action, you’re taking away from the director. Right? So that’s why I don’t think we’ll get it. For me, it’s not why I do it.

You mentioned that getting Jamie was like winning the lottery, but you’ve also got stars like Dave Franco and Snoop Dogg starring alongside him. What was it like putting that ensemble together?

I always had Snoop in mind. I said Snoop right away and [Jamie’s] head exploded. Snoop looked just like my old platoon sergeant. When he’s not creating great music or headlining the Super Bowl, now he’s an action star. And I’ll be honest, I was scared to death about who was gonna play Seth. As soon as Jamie signed on, I was like, “OK, who can volley with that dude?” You can’t put a lightweight in there with Mike Tyson. It was Jamie that said, “Hey, have a look at Dave Franco.” As soon as I met Dave, I knew I had the right tool. We had a cast read through on Zoom. As soon as we did that, everyone knew. Dave came with his gloves laced up. He came out swinging, throwing fastballs. I’m texting during it like, “Oh, my God, oh, my God, this is happening!”

The movie takes place in the San Fernando Valley. Why choose the Valley as the setting for this story?

When you come to this town, without any money, without knowing people, you have to start small. I moved to the Valley in a little studio apartment with three other dudes. I’m from a small town [called] Stafford, Texas, which is outside of Houston. other [The Valley] what this cool, trippy, exotic place. You could hear different languages, you could smell the Korean barbecue in the air, the tacos. I was overwhelmed with how cool that place was. It was hot in the summer, you’re not far from the water. I really wanted to capture that in Day Shift. Tyler Tice wrote [the screenplay] and he’s from the East Coast, but he had worked in the Valley. That’s how we worked that in there.

And right now, New York, London, Atlanta — they’re the most over saturated locations to film in the world. Oh, it’s Big Ben again, right? Nobody films in LA anymore. So strangely, when people watch it, they go, “Oh, my God, the Valley looks cool.” Because no one’s filming there anymore. So hopefully, if we get to do another Day Shift — a Night Shift or Graveyard Shift — we’ll get to come over the hill and do it in Hollywood and Downtown.

Speaking of potential sequels, what’s next for you after this?

I never expected any of this. I wake up every morning and I can’t believe I’m still not in the Army. It’s been 32 years, and I’ve won the lottery. I just want to keep directing. Whether it be first unit or second unit, I’d love to do another movie. I feel like I’ve learned what I don’t need to do now that I’ve done my first movie, which I think will make me infinitely better on my sophomore effort. I understand now that I’ve seen behind the curtain. And again, I’m super grateful for all these opportunities. So, whatever happens next, I’m ready for it.