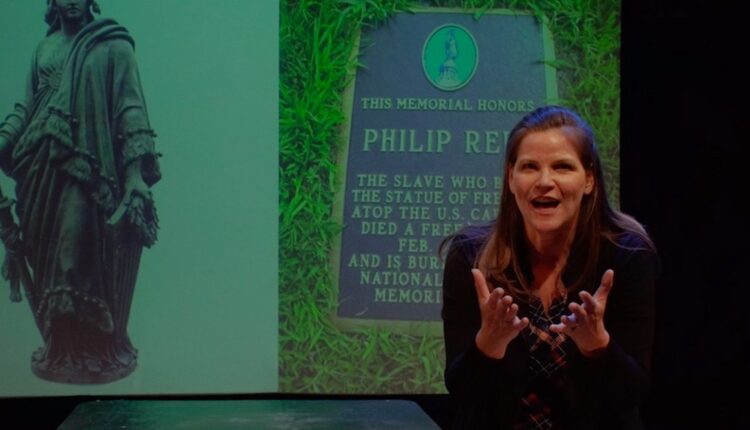 Lady LiberTease, a hit at the Hollywood Fringe Festival in August, is back for a single appearance at the Binge Free Festival at the Santa Monica Playhouse.

Kirsten is a teacher and theater director. She is happily married and has two children. When Hillary Clinton loses the 2016 election to Donald J. Trump, Kirsten has to think about the world her children will grow up in. That spurs them on to activism.

As a point of inspiration, she conjures up the goddess Columbia, an original, feminine, personifying symbol of America (just as France is personified by Marianne and Great Britain is personified by Britannia). Although largely forgotten today, except as a film studio logo, for the first 150 years of its existence Colombia was a powerful symbol of America, a free country with freedom and justice for all. However, as Kirsten delves deeper into the story, she discovers that the image of Columbia has been undermined, for example when it was used to promote the doctrine of white supremacy of the Manifest Destiny and forcibly evict the American Indians from their ancestral lands; and, sixty years later, promoting the agenda of the Ku Klux Klan.

Kirsten may need to look at the history of previous generations of her own family to find out if they were involved in an unsavory chapter in American history. Aware of her own privilege, she wants to help create a better world for her family and community. How does she do this without falling into the trap of becoming the White Savior? She may need to look inward to rid herself of her own untested racial prejudice and misogyny.

So is Columbia our Lady Liberty in the end or is she just a Lady LiberTease?

Kirsten Laurel Caplan is an actress, writer, director and educator. She was professor of performing arts for music, dance and theater. She has directed 20 high school productions. She was the middle school diversity and inclusion coordinator (which led her son to call her “The Includinator”) and was an adjunct professor at Mt. St. Mary’s University. Kirsten created a previous solo show, Whose Dream Is This Anyway? A native of Studio City, she studied Classical Theater at Claremont Colleges and earned her MFA from Towson University.

Jessica Lynn Johnson directs Lady LiberTease. She is celebrated both as a solo artist and as a director of solo artists, founder of Soaring Solo Studios and winner of the Best National Solo Artist Award. Her directorial work finally includes the unemployed, The Mermaid Who Learned To Fly, 365 Days Crazy, Triangles are my favorite shape, Bully-mia, Not My Show, Answers Outta The Blue, Dear Yoko and more.

Lady LiberTease is performed to a live audience at the Santa Monica Playhouse Other Space. The performance will also be streamed live for those who prefer an online option.

In addition to Kirsten’s captivating performance, Lady LiberTease comes alive with multimedia projections, including obscure images of historical memorabilia from the past two centuries, particularly images of our beautiful Columbia that you are unlikely to see anywhere else.

Lady LiberTease is a fascinating look at where America has been, where it is now, and where it could go from here.

Come with Kirsten for an interactive and reflective workshop – EVERYONE is INCLUDED.

Explore topics like diversity, inclusion, justice and equality … or, as Kirsten says, learn to be a JEDI. Attend Kirsten’s follow-up workshop after Lady LiberTEASE.

(Note: you are welcome to come to the workshop even if you do not see the show or vice versa)

The Covid security protocols applicable on the day of the performance are observed.

WHO: Written and performed by Kirsten Laurel Caplan. Directed and developed by Jessica Lynn Johnson. Produced by Living Up to Your Laurels and Soaring Solo Studios.

WHERE: Santa Monica Playhouse, 1211 Fourth Street, Santa Monica, CA 90401. Parking is available in a municipal building across the street.

RESERVATIONS: ARE REQUIRED: Call (310) 974-9779 ext. 1, or email [email protected], provide the name of the show, the number of seats required, your full name and phone number when making your reservation.

NFL Roundtable: Is Opener The Blueprint For Chargers, Rams?