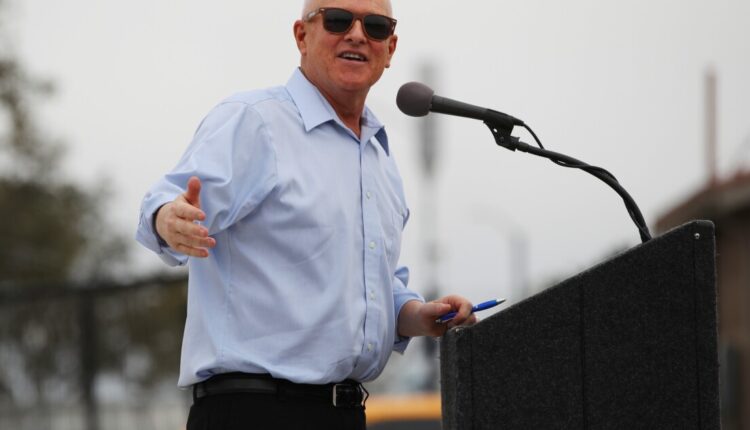 Los Angeles City Councilman Mike Bonin seemed to have a lot going for him as he prepared for a reelection campaign for his Westside district. A mean-spirited recall effort had sputtered and failed. Bonin, who was first elected in 2013, won his last reelection with 71% of the vote.

Then, suddenly, he announced last week that he will not to run for a third term in order to focus on his battle with chronic depression. He didn’t attribute his decision completely to his other battle — with vocal and relentless critics — but did say there were times when the council job made dealing with his depression “more challenging.”

There has been little about Bonin’s time during his current term that has not been challenging. He is a progressive on issues of homelessness, police reform and the environment. When other council members voted for an ordinance last summer that would allow them to designate streets and areas off-limits to homeless campers, Bonin voted against it, arguing that the council had spent no time figuring out where homeless people could sleep if they turned down an offer of shelter.

He asked city officials to evaluate whether a beach parking lot in Pacific Palisades and a portion of a park in Westchester could be used temporarily for safe camping for homeless people. (City experts recommended against it, and the idea was dropped.) He also voted with the majority of the council in 2020 to cut the police budget and put much of the money into city services and programs to help poorer communities.

Those positions made some people livid. He has been (wrongly) blamed for crime, fires and the proliferation of homeless encampments in his district—and sometimes beyond. People have yelled at him at public meetings and demonstrated in front of his house, where he lives with his husband and young son. At a lengthy Westchester Neighborhood Council meeting last April on Zoom, attended by hundreds, Bonin was interrupted and heckled, forcing the organizer to mute participants to let him finish talking about the work he was doing to find shelter and temporary housing for homeless people. Later, one person piped up ridiculously: “He serves the needs of drug-addicted homeless people” over the needs of his constituents.

Politics is a brutal game, and the people who sign up for it should have a thick skin. But public discourse has become increasingly vitriolic over the past few years in a way that no one should have to endure. Members of the public routinely swear at and insult City Council members and LA County Supervisors during meetings. When Councilman Kevin de León accused a group of activists of urging homeless people at one downtown location not to take hotel rooms offered to them, the activists involved flatly denied the accusation. Others posted De León’s cell phone number on Twitter and urged people to call him. Activists have demonstrated outside the homes of former LA County Dist. atty Jackie Lacey, LA Mayor Eric Garcetti, LA Police Chief Michel Moore and LA County Public Health Director Barbara Ferrer, among other local officials.

This isn’t just an LA problem. Elected officials from school boards members to governors across the nation report a troubling increase in threats and harassment. In perhaps the most bizarre and starting case, a group of men plotted to kidnap Michigan Gov. Gretchen Whitmer in the fall of 2020 out of anger over her COVID-19 restrictions. The men were arrested before they could carry out their plot and are expected to go on trial soon.

During the pandemic, health officials in California and across the country have faced so much ire from the public that some have quit. In 2020, Nichole Quick, a top health official in Orange County, resigned after she was threatened and her home address disclosed by members of the public opposed to her mask mandate. Election officials also have been the target of enormous amounts of abuse by those unhappy with the outcome of the presidential election.

None of these tactics should be confused with political debate — or heroic civil disobedience. When the level of discourse descends into screaming and intimidation, and hard-working people decide the price to pay is not worth staying in public service, we all lose.