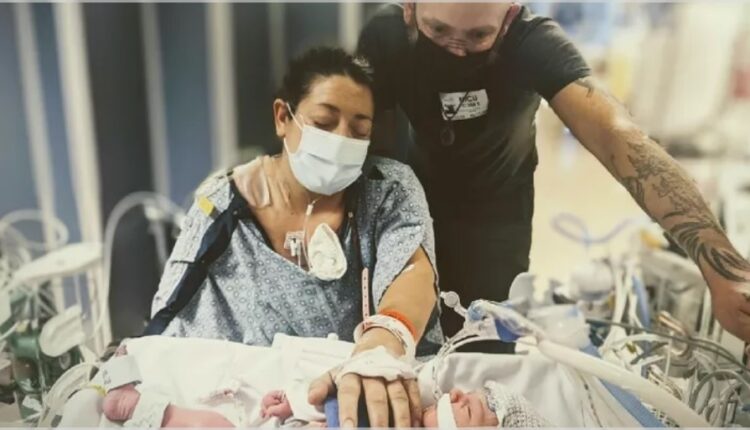 Violinist Norma Shea was visiting her ailing father in her hometown of Long Beach last year when she became pregnant with her first child.

“She was going to have a natural birth, with midwives and all this stuff,” her mother, Paula Shea, 60, said March 2, three weeks after her granddaughter, Oriah Shea, was born. “But that was all ruined.”

Norma, and her partner Joseph Harris were heading back from a veterinary appointment for her dog Willow, a Doberman mix, on Feb. 9. He was driving a Honda Civic in the left turn lane on Pacific Coast Highway at Cherry Avenue at about 4: 22 pm, according to police, when their car collided with a Dodge Ram that left a driveway and crossed several lanes of traffic.

Norma Shea was about eight months pregnant when she was injured in a crash in Long Beach, and forced to give birth via cesarean section on Feb. 9. Her daughter, Oriah, survived, but Shea remained intubated as of Sunday, March 6. ( Photo courtesy of Paula Shea)

Norma Shea, 36, suffered a punctured lung in addition to injuries to her diaphragm, kidney and liver, as well as 17 broken ribs, said Harris, 45, who escaped the ordeal with less serious injuries. Shea was forced to give birth via caesarian delivery that evening, about three weeks premature of her due date.

The baby, Oriah, survived after a week in the hospital. “She spent the first 72 hours of her life in a state of medically induced hypothermia to prevent damage to her brain,” Harris said. Though an MRI scan later found some hemorrhaging and she will have to be monitored, the child has been “thriving” since she was allowed to come home on Feb. 17, and was just above healthy body weight for a baby of her age as of Sunday, he said.

However, her mother was still intubated, though conscious, as of March 6.

Norma Shea has yet to hold her newborn.

“Her body protected our daughter, helped her come into this world,” Harris said. “And now, nobody knows which way it’s going to go. It’s like sitting on the edge of a sword.”

About 20 of Norma Shea’s friends and family attended a healing ritual known as a sound bath held March 1, in a dim outdoor seating area between Long Beach Memorial Medical Center’s main entrance and its parking lot. They were lit by little more than tea candles, good intentions humming out of meditative instruments called singing bowls, and one another’s company. Some hugged, cried, or occasionally glanced toward the upper floors of the building where Oriah’s mother was clinging to life.

“She has to be able to play the violin again,” Paula Shea said optimistically.

Norma Shea, who also goes by the name Tallulah Kidd, has shared her gift of music generously. She chose the violin as her instrument at a young age so she could play songs from the operas that her grandmother loved, Paula Shea said. She became a recurring attraction at Dark Harbor, an annual Halloween-themed event aboard an infamously haunted cruise ship docked at the Port of Long Beach.

“She created a job for herself at Dark Harbor,” Paula Shea said. “She called them up and said they should have a violin player on the Queen Mary, so they put her in a bunch of makeup and she did it for the first couple of years.”

Paula Shea, 60, uses a singing bowl to focus healing energy toward her daughter, Norma Shea, 36, during a “sound bath” held outside of Long Beach Memorial Medical Center on Wednesday, March 1. The younger woman was pregnant, and forced to give birth prematurely after getting injured in a crash on Feb. 9. Her firstborn child, Oriah survived, but Norma Shea remained hospitalized as of Sunday, March 6. (Eric Licas, Orange County Register/SCNG)

Harris described Norma Shea as a strong-willed woman who refused to back down from any of the challenges they faced while they recently backpacked across the country. He and Paula Shea said they had faith in their recovery, despite slow progress and hurdles reported by hospital staff.

Her loved ones have created a GoFundMe campaign to help cover the costs of her treatment and support her family as they care for the newborn child.

The midwives who were supposed to assist in Oriah’s birth have been visiting Norma Shea in the hospital. They fill her room with the scent of her favorite flowers, roses, and do what they can to ease her pain.

Meanwhile Willow, Shea’s longtime canine companion, has been “traumatized” by the crash and “mopes around the house all day waiting for her favorite human to come home,” Harris said.

Norma Shea has been able to briefly see and touch the baby. But there is “so much fear in her eyes,” Harris said.

The crash remains under investigation.