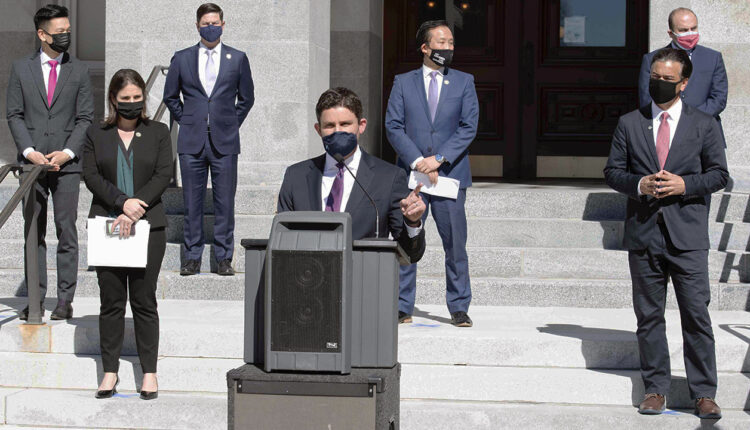 California’s hate crime increased 31% year over year in 2020, with incidents targeting Asian Americans doubling and hate crimes against blacks increasing 90 percent, according to a report by the Attorney General.

Anti-Semitism has risen across the country in recent years, and the Bay Area, while a bastion of diversity, is no exception. Such incidents in 2021 alone include anti-Israel graffiti outside locations in San Francisco: Chabad in Noe Valley in May and Manny’s Café, a Jewish small business in the Mission District, in June.

A numerical symbol widely believed to be white supremacy was discovered on the baseball scoreboard in a San Anselmo park in July, and anti-Semitic leaflets were distributed by a white supremacy group in Aptos, near Santa Cruz, in August.

The California Anti-Defamation League regional offices have been supporting AB 57 since Gabriel launched it 10 months ago.

“We are very interested in bills in California and elsewhere that will improve law enforcement education [and] Data collection that will help encourage communities and individuals to report [hate crimes] first, ”said Nancy Appel, the ADL’s California Legislative Director. “It’s an important piece in the overall fight against hate crime.”

Gabriel, a Democrat representing western San Fernando Valley in Los Angeles and Ventura Counties, had many allies on AB 57 in the Bay Area, both inside and outside the Jewish caucus.

Democrat David Chiu, who represents eastern San Francisco in the assembly, co-drafted the bill. Chiu is a member of the Legislative Caucus of California’s Asian Pacific Islander, and Gabriel said it was important for the Jewish caucus to ally with the API community after a 2020-21 stretch that saw several high profile incidents of anti-Asian hatred .

“It’s just been a terrible year for her,” said Gabriel. “We [as Jews] have long been victims of discrimination and hate crime, so we can intuitively understand what they are going through. It was very important to us to show solidarity with them. “

The bill addresses a number of concerns highlighted in a 2018 report by the state auditor that found that California often fails to properly identify, report, and respond to hate crimes. The Jewish caucus views AB 57 as a primary law and is supported by several representatives of the Bay Area in Sacramento, including Congregation members Rebecca Bauer-Kahan (Orinda) and Marc Berman (Palo Alto) and Senator Scott Wiener (San Francisco).

“We see an increase in hate crimes against the Jewish community and other communities,” said Wiener. “It’s especially important for California this year to move forward with both resources and politics.”

Newsom, fresh after losing to a Republican-led attempt to recall him, is expected to sign the bill, Gabriel said, noting that the Jewish faction had spoken to the governor about the importance of the issues that AB 57 is addressing. The ADL also sent Newsom a letter asking him to sign the bill, which was passed 38-0 in the Senate and 78-0 in the Assembly.

“California has traditionally had good laws in this area,” said Gabriel. “It’s clear we need to do more, but often California serves as a model for the rest of the country. So we hope people see the steps California is taking to step up its response to hate crimes, as this is certainly not a problem that is unique to California. “