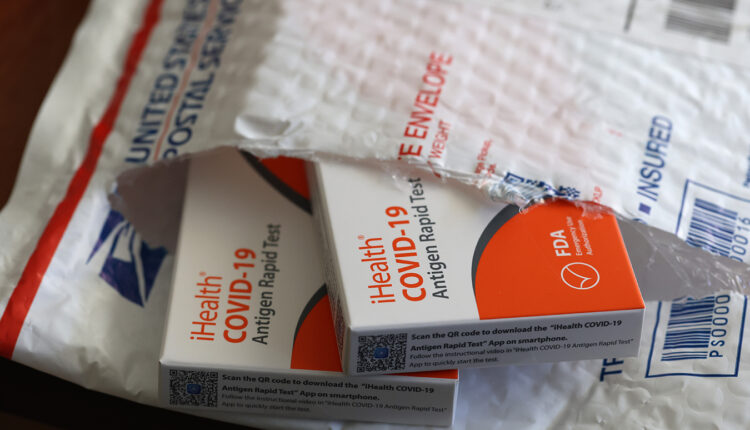 The four free covid-19 rapid tests President Joe Biden promised in December for every American household have begun arriving in earnest in mailboxes and on doorsteps.

A surge of covid infections spurred wide demand for over-the-counter antigen tests during the holidays: Clinics were overwhelmed with people seeking tests and the few off-the-shelf brands were nearly impossible to find at pharmacies or even online via Amazon. Prices for some test kits cracked the hundred-dollar mark. And the government vowed that its purchase could provide the tests faster and cheaper so people, by simply swabbing at home, could quell the spread of covid.

The Defense Department organized the bidding and announced in mid-January, after a limited competitive process, that three companies were awarded contracts totaling nearly $2 billion for 380 million over-the-counter antigen tests, all to be delivered by March 14.

The much-touted purchase was the latest tranche in trillions of dollars in public spending in response to the pandemic. How much is the government paying for each test? And what were the terms of the agreements? The government won’t yet say, even though, by law, this information should be available.

The cost — and, more importantly, the rate per test — would help demonstrate who is getting the best deal for protection in these covid times: the consumer or the corporation.

The reluctance to share pricing details flies against basic notions of cost control and accountability — and that’s just quoting from a long-held position by the Justice Department. “The prices in government contracts should not be secret,” according to its website. “Government contracts are ‘public contracts,’ and the taxpayers have a right to know — with very few exceptions —what the government has agreed to buy and at what prices.”

Americans often pay far more than people in other developed countries for tests, drugs, and medical devices, and the pandemic has accentuated those differences. Governments abroad had been buying rapid tests in bulk for over a year, and many national health services distributed free or low-cost tests, for less than $1, to their residents. In the U.S., retailers, companies, schools, hospitals, and everyday shoppers were competing months later to buy swabs in hopes of returning to normalcy. The retail price climbed as high as $25 for a single test in some pharmacies; tales abounded of corporate and wealthy customers hoarding tests for work or holiday use.

U.S. contracts valued at $10,000 or more are required to be routinely posted to sam.gov or the Federal Procurement Data System, known as fpds.gov. But none of the three new rapid-test contracts — awarded to iHealth Labs of California, Roche Diagnostics Corp. of Indiana, and Abbott Rapid Dx North America of Florida — could be found in the online databases.

“We don’t know why that data isn’t showing up in the FPDS database, as it should be visible and searchable. Army Contracting Command is looking into the issue and working to remedy it as quickly as possible,” spokesperson Jessica R. Maxwell said in an email in January. This month, she declined to provide more information about the contracts and referred all questions about the pricing to the Department of Health and Human Services.

Only vague information is available in DOD press releases, dated Jan. 13 and Jan. 14, that note the overall awards in the fixed-price contracts: iHealth Labs for $1.275 billion, Roche Diagnostics for $340 million, and Abbott Rapid Dx North America for $306 million. There were no specifics regarding contract standards or terms of completion — including how many test kits would be provided by each company.

Without knowing the price or how many tests each company agreed to supply, it is impossible to determine whether the U.S. government overpaid or to calculate if more tests could have been provided faster. As variants of the deadly virus continue to emerge, it is unclear if the government will re-up these contracts and under what terms.

To put forth a bid to fill an “urgent” national need, companies had to provide answers to the Defense Department by Dec. 24 about their capacity to scale up manufacturing to produce 500,000 or more tests a week in three months. Among the questions: Had a company already been granted “emergency use authorization” for the test kits, and did a company have “fully manufactured unallocated stock on hand to ship within two weeks of a contract award?”

Based on responses from about 60 companies, the Defense Department said it sent “requests for proposals” directly to the manufacturers. Twenty companies bid. Defense would not release the names of interested companies.

Emails to the three chosen companies to query the terms of the contracts went unanswered by iHealth and Abbott. Roche spokesperson Michelle A. Johnson responded in an email that she was “unable to provide that information to you. We do not share customer contract information.” The customers — listed as the Defense Department and the Army command — did not provide answers about the contract terms.

“Unfortunately, there is an issue with voicemail,” said Ralph Williams, a representative of the protocol office. “Voicemail is down. I mean, voicemail has been down for months.”

Asked about the bounced email traffic, Williams said he was surprised the address — [email protected] — was listed on the ACC website. “I’m not sure when that email was last used,” he said. “The army stopped using the email address about eight years ago.”

Williams provided a direct phone number for Aberdeen and apologized for the confusion. “People should have their phone forwarded,” he said. “But I can only do what I can do.”

Both the Defense and Army spokespeople, after several emails, said the contracts would have to be reviewed, citing the Freedom of Information Act that protects privacy, before release. Neither explained how knowing the price per test could be a privacy or proprietary concern.

A Defense spokesperson added that the contracts had been fast-tracked “due to the urgent and compelling need” for antigen tests. Defense obtained “approval from the Assistant Secretary of the Army for Acquisition, Logistics, & Technology to contract without providing for full and open competition.”

KHN separately searched for the contracts on the sam.gov website during a phone call with a government representative who assisted with the search. During an extended phone session, the representative called in a supervisor. Neither could locate the contracts, which are updated twice a week. The representative wondered whether the numbers listed in the Defense press release were wrong and offered: “You might want to double-check that.”

On Jan. 25, Defense spokesperson Maxwell, in an email, said that the Army Contracting Command “is working to prepare these contracts for public release and part of that includes proactively readying the contracts for the FOIA redaction.” Three days later, she sent an email stating that “under the limited competition authority … DOD was not required to make the Request for Proposal (RFP) available to the public.”

Maxwell did not respond when KHN pointed out that the contracting provision she cited does not prohibit the release of such information. In a Feb. 2 email, Maxwell said “we have nothing further to provide at this time.”

On sam.gov, the covid spreadsheets include a disclaimer that “due to the tempo of operations” in the pandemic response, the database shows only “a portion of the work that has been awarded to date.”

In other words, it could not vouch for the timeliness or accuracy of its own database.

Super Bowl 2022: Who are the real Los Angeles Rams fans?