Super Bowl 2022: Who are the real Los Angeles Rams fans? 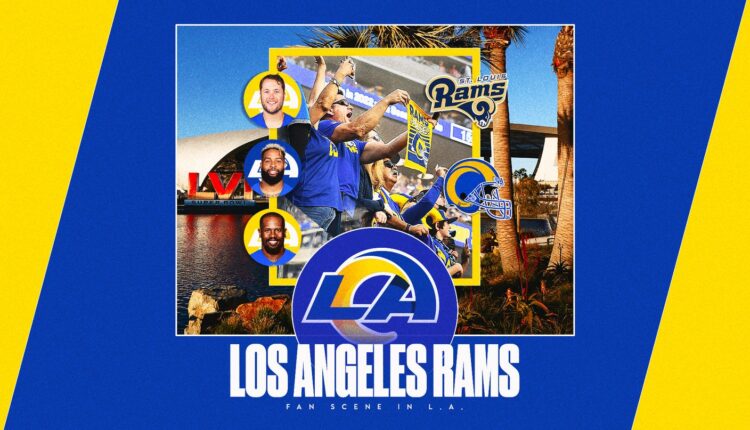 LOS ANGELES — Super Bowl LVI banners are wrapped around columns near baggage claim at LAX. Banners hang from streetlights near SoFi Stadium, the sleek, still-new, light-filled home of the rams other Chargers. The Convention Center in downtown LA, home to this year’s radio row and media center, is decked out with the orange, yellow, and red LVI branding that fades into purple at the edges.

But besides the even-worse-than-usual traffic and occasional window decal on a Sleep Number store, it isn’t obvious that a Super Bowl is taking place in this city — let alone as a home game. People forget, but the Los Angeles Rams are playing in the Super Bowl in Los Angeles. For almost any other team — besides, perhaps, the Chargers — this would be a massive advantage.

Skip Bayless: LA sports fans are the worst in America

Skip Bayless explains why Los Angeles is his least favorite sports city in the country.

It’s strange that, for the second year in a row, the last NFC team standing is playing its biggest game in its home stadium. When the Tampa Bay Buccaneers won the Super Bowl in Tampa last season, fans were ecstatic. The city had found a new savior in Tom Brady, and he brought the team its first championship in almost 20 years.

The Super Bowl might not have technically been a home game for Tampa, but the city lit up after the win. The place was rapt as the celebratory boat parade wound through its waters. Brady drank “avocado tequila.” He threw the Lombardi Trophy from one boat to another as though it were a real football, not a metal one attached to a stand. He cemented the city’s nickname of Champa Bay.

If the Rams win Sunday, a boat parade that captures the attention of the whole city will probably not happen. Not only is there a lack of waterways through Los Angeles, but also the place itself is so vast and there are so many sports teams that a lot of people are wondering if anyone here will care. This is a place that expects the Lakers to be in the Finals every year, and if they aren’t, fans consider the season a waste of time.

Let’s get this out of the way: Yes, the Los Angeles Rams do have fans. They even have super fans, such as Adrian and Alana Castanon, who hold season tickets and will be attending the Super Bowl despite the astronomical price to get into the stadium. If it isn’t too hot, Adrian will wear his Rams Robe, a reversible fluffy bathrobe with team colors on one side and an embroidered logo on the other.

Adrian grew up a huge USC fan in Southern California. His father loved the Rams when they played in LA, and he continued rooting for the team when it moved to St. Louis. But the Castanons’ fandom really blossomed when the team came back six years ago.

“It’s incredible. We’re just absolutely thrilled,” Adrian said. “This is a once-in-a-lifetime thing for us. And we’re pumped to see our home team in their home stadium at the Super Bowl. The stars just aligned.”

Adrian will be the first to admit that Rams fans don’t show up the way other fan bases do. After all, 49ers fans outnumbered Rams fans at the NFC Championship, and a local news station interviewed a guy in a Cowboys jersey after the Rams’ win.

But it’s a tall ask to expect any LA team, and particularly a recent transplant, to have the kind of fan base with which, say, the Cincinnati Bengals are blessed. LA is different from a small-market city, and it’s different from many big ones. No one team will ever own the heart of this place because this place doesn’t have one heart.

LA fans are as decentralized as the city itself. If you live on the east side, going to Venice is a day trip. If you live on the west side, Silver Lake might as well be Brooklyn (which, let’s be honest, it already kind of is), and the real Brooklyn might actually be easier to get to. There are pockets of fandom in LA the way there are pockets of neighborhoods, and the type of fandom is different. When I was in Kansas City for the AFC Championship, every single billboard had a Chiefs player on it. Patrick Mahomes was hawking a doctor’s office on one sign and plumbing systems on another. The whole city lit up red, even after the Chiefs lost.

Los Angeles can’t light up one single color. There are two basketball teams here. LA fans don’t even have one set blue-and-yellow NFL combination. They have two to choose from: the Chargers’ baby blue and marigold or the Ram’s royal blue and McDonald’s yellow.

But thanks to the sprawling nature of this place and its massive population, there’s room for more than one team in each sport. Which brings me back to the question I’ve heard a lot of people outside — and even in — California asking: Who is a Rams fan?

Based on an anecdotal collection of evidence from a lot of people on the internet and in this city, I’ve come up with a few rough categories. There are the fans like the Castanons, who had a soft spot for the team already and latched onto it when it returned from St. Louis. There are also folks like Peter Lau, who reserved his NFL fandom for a team he could call his own.

“I’m 32 years old, born and raised in LA,” he said. “I’m a huge football fan and decided I wouldn’t be a fan of a team until someone moved here. I got season tickets and have supported them ever since.”

Speaking of St Louis: We have to talk about that scorned city. When the Rams left in 2016, they created a wake of heartbreak and rage. I wrote about angry Rams fans in 2017; they felt abandoned by ownership and wished the team nothing but failure. I checked in with many of them this week, and not much has changed. When I asked people in St.Louis how they felt, my Twitter DMs were filled with vitriol for the franchise.

“My mom and stepdad haven’t watched the NFL — even a Super Bowl — since the Rams left,” former St. Louis Rams fan Emily Butcher said. “And, since [Rams owner Stan] Kroenke is married to a Walton, my family doesn’t shop at Walmart or Sam’s Club anymore.”

Butcher’s was a common sentiment. But I’m willing to bet more fans than will admit it feel the way St. Louis native Steve Clark does.

“I really wanted to drop them as my team when they moved,” Clark said. “But having watched 20 years of terrible football and seeing them finally start to look better, I stuck around in hopes of the players I really like getting a ring.

“I do wonder if when they win the Super Bowl, if that will be when I allow myself to stop caring about them. It’s like my mind is forcing me to stick with them until they win, so I don’t feel like I wasted 20 years of watching the worst football ever.”

OK, now that we’ve dealt with the emotions of St. Louis, let’s get back to Los Angeles.

The Rams’ recent strategy has brought in more fans than the team had here for decades because the franchise acquired players with huge fan appeal who had struggled elsewhere. Guys such as Odell Beckham Jr., who had a reputation for being difficult in New York and Cleveland but maybe was just dealing with bad management. Or Von Miller, who, after winning a Super Bowl in 2016, suffered through years of bad football in Denver before finding a chance at another championship. Or quarterback Matt Stafford, who failed to win a playoff game in 13 years in Detroit, only to make it to his first Super Bowl in his first season in LA

Skip Bayless tells the story of why Lil Wayne blames himself for Odell Beckham Jr.’s ultimate departure from the New York Giants.

“I grew up rooting for the Rams in the 1950s, and my dad would take me to games,” said NFL super-agent Leigh Steinberg, on whom the character of Jerry Maguire was largely based. “We would sit in the Coliseum so far away that you had to use a telescope to try and identify the players. But I fell in love with them.

“They have done an excellent job of fashioning a team that would get Southern California excited. Why? We love stars, and they have stars on that team. No. 2, we like the fact that the games are only played once a week. No. 3, they play an exciting brand of football.”

While those stars and that exciting football are luring more and more people in, a lot of other NFL fans are tough on the Rams’ fan base. Twitter lit up with jokes after the Bengals threw a pep rally at their stadium in Cincinnati and packed the place, while the Rams held theirs at Oaks Christian High School near the team’s practice facility in Thousand Oaks.

How could people not laugh? One team in the Super Bowl received a hero’s sendoff of tens of thousands; the other was voted prom king.

But Ryan Dyrud, founder of the LA Football Network, says this isn’t fair. The team couldn’t throw a rally at SoFi because it was being readied for a Super Bowl, and the LA Memorial Coliseum was hosting a NASCAR race last Sunday. Dyrud also said that there was a big emphasis on outreach to kids — if the Rams are going to build a loyal fan base, it will come from the generation that can buy season tickets in 15 years. Five winning seasons in as many years and two appearances in the Super Bowl should help.

It’s hard here to not make comparisons to the Brooklyn Nets. When I wrote about the Nets’ fan base (or slight lack thereof) last spring, the Brooklyn fans who do exist jumped down my throat. But I would argue that it’s a miracle for teams that arrived fewer than 10 years ago in cities such as New York and LA to have a fan base at all, let alone a huge chance to capture the hearts of the next generation.

Which both the Nets and the Rams certainly do.

The simple fact is that a place such as New York or LA, which have so much else going for them and are so vast and varied in industry and population, will never boast the kind of support that smaller markets — places such as Cincinnati and Kansas City — are lucky enough to have. But they do have dedicated pockets of diehards, and they can increase those with winning seasons and championships.

Who knows? Maybe someday, a home Super Bowl in Los Angeles will result in crowd noise so deafening that the other team doesn’t stand a chance.

But in the meantime, appearing in the biggest game of the American sports calendar is a great stepping-stone to getting there.

Charlotte Wilder is a general columnist and cohost of “The People’s Sports Podcast” for FOX Sports. She’s honored to represent the constantly neglected Boston area in sports media, loves talking to sports fans about their feelings and is happiest eating a hotdog in a ballpark or nachos in a stadium. Follow her on Twitter @TheWilderThings.

Get more from National Football League Follow your favorites to get information about games, news and more. in this topic

Yes, I Know I’m Unathletic: Recapping An Eventful Day By The Water In Santa Monica