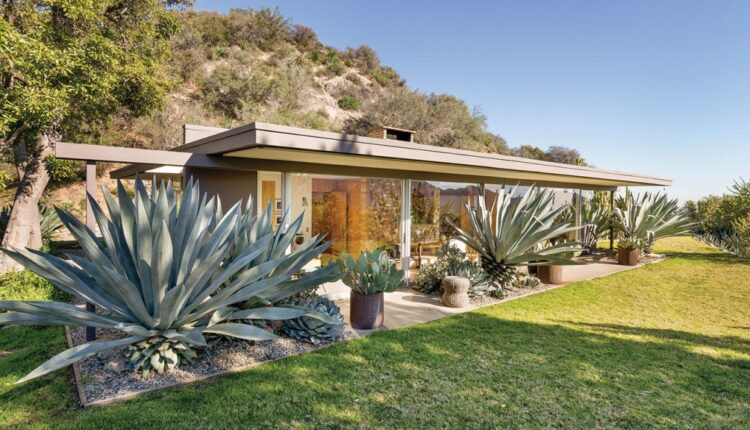 Long considered the Westside’s lesser sibling, the San Fernando Valley’s unique residential architecture and family-friendly neighborhoods are increasingly a draw. According to The Agency’s Red Paper, 2021 saw single-family home sales rise 16 percent year-over-year and the median sales price was up 15 percent in the Valley, the nostalgic locale of Paul Thomas Anderson’s best picture nominated film Licorice Pizza. “There’s been a huge exodus of people from other higher-density population areas right into the San Fernando Valley,” says Alessandro Corona of Douglas Elliman. (In Licorice Pizza, Bradley Cooper’s character lives in a 5,400-square-foot, English-manor-style residence in Encino; built in 1976, it last sold in 2019 for $2.76 million.)

Adds Carrie Berkman Lewis of Douglas Elliman, “Ten years ago, the Valley might have been a concession for people who couldn’t afford to be on the Westside. Now, I feel like it’s a destination.”

For many in early Hollywood, the San Fernando Valley was an escape — a rural wonderland where stars like Clark Gable and Carole Lombard, Lucille Ball and Desi Arnaz, and Barbara Stanwyck (whose Marwyck Ranch, designed by Paul R. Williams and Robert Finkelhor, is now a museum) could cosplay living the life of rough-and-tumble ranchers on their large estates.

During the postwar era, thousands of working- and middle-class families — many who worked in the Valley’s booming aerospace industry — moved into nondescript tract homes being built by developers as quickly as possible. The Valley represented to many a further refinement of the time-honored American dream — “a home of one’s own, a sunny climate, affordable living, easy access to employment, quality schools, the promise of a better life,” the LA Conservancy notes .

But for every “salt box home” there were also innovative attempts to reimagine the perfect suburban oasis. Local architects expanded and revamped the rambling one-story ranch house — the Valley’s dominant style — offering variations such as traditional, Hawaiian and Cinderella, which features storybook elements like curved gables. In Northridge, the firm of Palmer &Krissel introduced its “living conditioned” ranch home, featuring large clerestory windows and ample layouts that were said to offer the ideal space for the average Southern California family.

The most distinctive style to spring out of the Valley during the mid-century era was undoubtedly the birdhouse ranch, designed by developer William Mellenthin. These rambling ranch homes, of which thousands were built, have playful touches: cottage-like roofs, cupolas and dovecotes. Thousands of birdhouse ranches were built in neighborhoods including Encino, Burbank, Studio City, North Hollywood and Sherman Oaks.

Less whimsical modern masters, including Rudolph Schindler, A. Quincy Jones, Richard Neutra, Lloyd Wright and John Lautner, designed higher price-point homes high in the Valley’s hills. One of the finest examples of Lautner’s work in the Valley, the Schaffer Residence in Glendale, serves as a location in The Dropout, the new series about Theranos’ Elizabeth Holmes.

These midcentury masterpieces of wood, glass and steel, some seemingly precariously hanging off the hills, have become especially coveted in recent years. In 2021, model Anwar Hadid paid $2.5 million for a rustic 1,433-square-foot Lautner in Studio City, built in 1953, while Flea recently listed a compound in Tujunga for $9.8 million that includes a 1953 Neutra house and a later addition of a separate house by architect Michael Maltzan.

The residence designed by Michael Maltzan on Flea’s compound in Tujunga. The property is listed with Sherri Rogers, Elisa Ritt and Anthony Stellini of Compass, and Asher Ehsani of Uhler Mortgage Solutions for $9,799 million.
Lauren Engel

According to Craig Knizek of The Agency, the eastern area of ​​the Valley is particularly rich with hillside midcentury moderns. “The flippers are coming in, where you’ve got these single-story homes with fantastic views,” he says. “People are coming in and gutting them and basically making brand-new homes but preserving the [exterior] architecture.”

Dated ranch homes are being repurposed and remodeled as well. In 2019, Karen and Shawn Emile toured a 1950s ranch in a Woodland Hills neighborhood with well-preserved homes designed by the celebrated architect Charles Du Bois (famous for his houses in Palm Springs). “As soon as I walked in, I saw the windows. I saw the stone fireplace. I was like, ‘I can make this work. I can turn it into more like a country cabin feel type of a home,’” says Karen Emile, founder of the design-focused Instagram account @milkandhoneylife. “I was like, ‘I’m going to make this house shine.'”

With Karen working as a designer, her husband, Shawn, and two workers transformed the house. “When we purchased it, it wasn’t really updated at all,” she says. “The kitchen was old, and it was really closed in, but the house had such good bones.” The Emiles painstakingly transformed the home into a Scandinavian inspired modern country ranch, filling it with light and space.

But for every loving preservationist like Karen Emile, many flippers are simply tearing down the historic architecture of the Valley, particularly in highly desirable areas like Studio City and Sherman Oaks. “Flippers that come into these neighborhoods find the worst house on potentially the best block and they create this modern masterpiece,” says Corona.

According to Berkman Lewis, Mellenthin’s birdhouses are specifically at risk of being torn down. “Some of those post-and-beam homes were not well taken care of,” she says. “So they have a lot of wood damage and a lot of problems.”

In their place, many developers are building lot-fill modern homes, notably in the now-ubiquitous modern farmhouse style. “I’m not really impressed with some of the new construction I’m seeing, except on the higher end — if you’re getting up in like the $8 to $12 million range, then maybe you’re seeing finishes that are deserving of that price point,” says Berkman Lewis. “On the lower end, like $2.5 [million] to $3 [million], personally I feel like for the most part, the finishes, they’re not that impressive. They feel really trendy to me. They don’t feel timeless.”

Emil Hartoonian of The Agency adds to this. “90 percent of the work right now, they’re giving the end user what they’re looking for right now. You know what I mean? They’re not really looking to build timeless pieces per se,” he says.

Developers of these new contemporary homes are in many ways continuing the Valley’s consumerist trend of architecture on demand. Hartoonian notes that in Calabasas, homes only a decade old already are being transformed to meet certain trends. “It’s always been a center of influence and big, fancy Italianate, Mediterranean mansions were being built. And now, to be frank, you almost cannot give them away,” he says. “So what’s happening is there’s a move toward transforming them to modern Spanish style.”

Call it the American way. As the Valley becomes more and more desirable, expect more houses to change based on consumer whims.

A version of this story first appeared in the March 23 issue of The Hollywood Reporter magazine. Click here to subscribe.