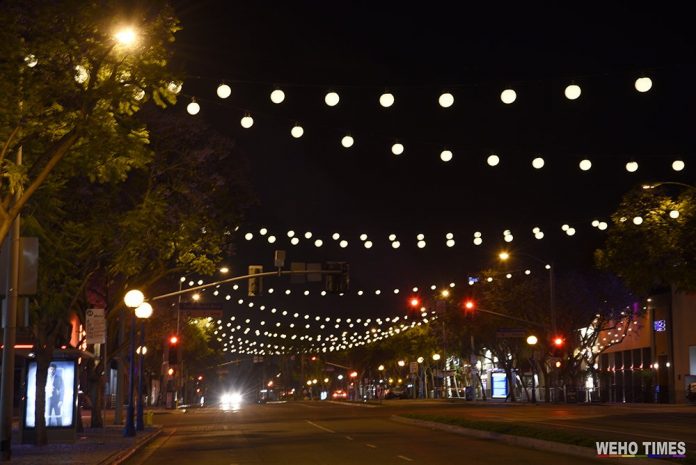 Agenda Item 5.C at the next regular West Hollywood City Council Meeting will explore the installation of mid-city street lanterns on Santa Monica Boulevard. City council will direct staff to issue a Request for Proposals (RFP) for the design and installation of decorative lanterns across Santa Monica Boulevard in the mid-city area of ​​West Hollywood. Staff will also come up with design options and proposed boundaries, as well as a recommendation to move forward with the construction contract based on the results of the RFP.

The mid-city street lanterns will be similar to the temporary ones installed during 2019 LA Pride in West Hollywood, on Santa Monica Boulevard between Robertson Boulevard and Hancock Avenue. The City issued a Request for Proposals (RFP) for a permanent, commercial-grade system of lanterns that would be compliant with Fire Department regulations and programmable with different light configurations and effects for different events throughout the year. The permanent colorful globe lanterns were installed in December 2019 and provide a bright atmosphere and welcoming feel to the City’s LGBT “Rainbow District” during nighttime. The cost of installation was $289,000.

In May 2021, Council directed staff to move forward with issuing an RFP to establish a similar system of lanterns on the City’s eastside. The new lighting – which is expected to be installed in the coming weeks – will highlight the City’s eastside gateway, make the entrance into West Hollywood more obvious along Santa Monica Boulevard, and bring a welcoming feel to this side of the City. The eastside lights will be installed along Santa Monica Boulevard from N. Vista Street to La Brea Avenue. The cost of installation is estimated to be $329,000.

More research is needed to determine the specific location of the lanterns in the mid-city area, taking into consideration the location of streetlight poles, approval by the LA County Fire Department, and proper router placement. Staff will look at the area between La Cienega Boulevard and Fairfax Avenue along Santa Monica Boulevard and determine the appropriate section to move forward with the lantern installation. Staff will return with the results of the RFP as well as more information on design options and proposed boundaries. If this item is approved, the cost of the installation of the lanterns is estimated to be $300,000 – $400,000 depending on final location and specifications.

Agenda item 5.C. initiated by Mayor Pro-Tem Sepi Shyne and council member Lindsey Horvath, states that adding the mid-city street lanterns in West Hollywood will help establish a cohesive and unifying feel to the City that visually connects to the eastside and westside of the City. Mid-city – which includes City Hall, restaurants and entertainment, and many small businesses – is an important part of the City’s civic and economic core. The lanterns will help define mid-city as a unique and thriving part of West Hollywood and create a place for visitors and residents that visually aligns with other parts of the city.

The lanterns currently installed on the westside – and soon-to-be-installed on the eastside – are programmable either as individual lanterns or entire strands of lights, which will allow the City of West Hollywood to recognize national events or celebrations that traditionally use signature colors. All lanterns have UV protection to prolong the life and ensure clarity of the shield around the light fixtures. In addition, the lanterns feature easily replaceable fixtures and are custom-made in the United States of commercial-grade construction to withstand the elements for successful permanent exterior installation. The lanterns are engineered to meet the weight and wind-load requirements of existing light poles to which they are attached and are compliant with fire safety regulations.

Members of the public who wish to comment on matters before the City Council are strongly encouraged to submit written correspondence to [email protected] or submit an E-Comment by visiting www.weho.org/wehotv no later than 2:00 pm on Council meeting day. Note: Written Correspondence and E-Comments will not be read into the record during the City Council meeting; however, correspondence received by 2:00 pm will be forwarded to the City Council and posted on the City’s website as part of the official meeting record. Your comments and information will become part of the official public record. If you do not want your personal information included in the official record, please do not include your address and/or phone number.

How To Get Your Second COVID-19 Booster In Los Angeles