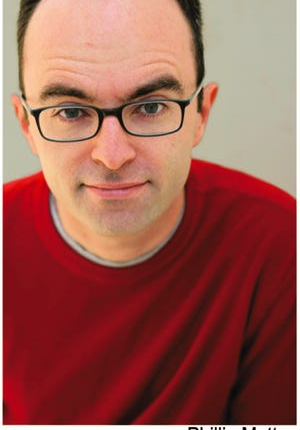 GALESBURG – The main character in Phillip Mottaz’s detective novel, “The Mayor of Bel Air’s Murderous Haircut,” grew up in a small town in Illinois before moving to Los Angeles to find her place and get over her head.

Mottaz, who graduated from ROWVA High School in 1994 and Knox College in 1998, based many of these characterizations on his own life, the main difference being that, unlike his main character, he has no psychic abilities.

The novel is the first in Mottaz’s Psychic Barber Mystery series. It’s about Danica Luman, a hairdresser who can read the minds of her clients.

Danica lives and works in Los Angeles’ San Fernando Valley and uses her powers at work by touching the heads of her clients and getting a vision of what their desired hairstyle might look like. But one day, when she gave an unknown customer a haircut, she touched his head and saw a corpse.

Forced to solve the case, she takes on the role of an amateur detective, only to be drawn further into the weird underbelly of Los Angeles by every clue. Fighting unpaid bills, attempted murder and dangerous family disputes, she tries to solve the murder and find out how it relates to the police, a college newspaper and an old man who calls himself mayor of Bel Air.

After graduating from Knox, Mottaz studied improvisation and sketch comedy in Chicago. Since moving to Los Angeles, he has written a variety of scripts, produced several podcasts and – to this day – has not developed any psychological skills.

He lives in the San Fernando Valley with his wife and son. “The Mayor of Bel Air’s Murderous Haircut” is his first crime novel. Follow him on Twitter @phillipmottaz or subscribe to the newsletter at www.philipmottaz.com.

Mottaz is self-publishing the book and has chosen not to sell it on Amazon Kindle. He encourages readers to support local bookstores and libraries. eBooks are available from all other non-Amazon sellers. The book has 346 pages and is available for purchase immediately.

The book was sold out at the Wordsmith Bookshop in Galesburg this week, but can be ordered there.