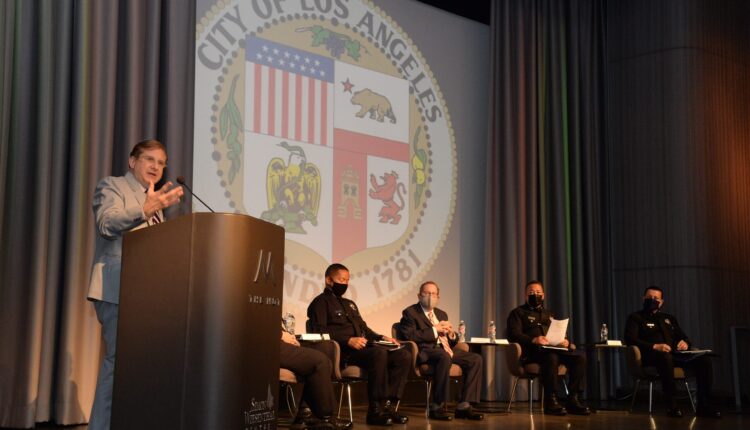 (September 5, 2021.) / JNS) Los Angeles City Councilor Paul Koretz hosted a meeting at the Museum of Tolerance on Sept. 1, with presentations from Los Angeles Police Department members to Jewish leaders and parishioners on synagogue and institutional security in time for the High Holidays.

Attracting rabbis and community leaders from across the San Fernando Valley and west Los Angeles, City Hall highlighted the LAPD’s plans of action, particularly during Rosh Hashanah and Yom Kippur, and provided security and reporting tips to the community in support of the LAPD in institutional and security Quarters.

“As a City Council member of the 5th District, who has deep roots in the Jewish community, I want to make sure that all Jewish people know the rights and resources they have when exposed to hatred,” said Koretz. “According to the Anti-Defamation League’s annual Audit of Antisemitic Incidents, the highest in 2019 and 2020 were or began in 1979. These numbers are shocking and heartbreaking, but they are also a call to action.”

The command staff of the LAPD, including Deputy Chief Blake Chow, Deputy Chief Alan Hamilton, Commandant Natalie Cortez, and Commandant Rafael Ramirez, then gave an inside look at the Operations Valley Bureau and Operations West Bureau, emphasizing the need to be during the Christmas season and beyond to work with the community.

The two-hour program was moderated by Koretz’s Director of Public Safety, Greg Martayan, and featured a lively question-and-answer session. The event was attended by LAPD Captains from across the region who shared specific plans tailored to their geographic areas.

Before it began, Koretz presented the Deputy Chiefs and Commanders along with Cooper and the Director of the Museum of Tolerance Love Geft Awards from the City of Los Angeles.

After the meeting, the participants and LAPD leaders split into subgroups to fill any communication gaps and exchange contact information. Official brochures on reporting, reporting and reporting locations were also distributed.