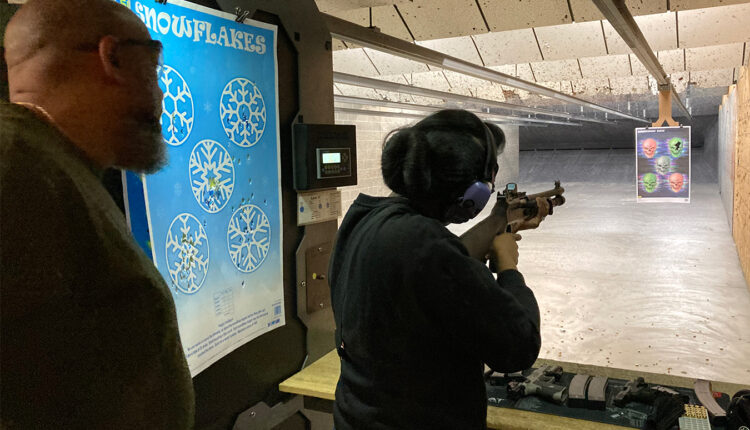 When Russell and Sharis Lewis want to unwind, they pack up their guns and drive from their home in a suburb north of St. Louis to an indoor range called the SharpShooter on the city’s south side.

Russell dons big protective headphones, carefully lays out his firearms, and selects a Panzer Arms M4 12-gauge semiautomatic shotgun. He takes aim at paper targets, including one labeled “snowflakes,” and squeezes the trigger.

“It’s just something about the power and being able to release that and let it go downrange,” he said. “It relaxes me.”

Sharis, Russell’s wife, practices with her new handgun, a Sig Sauer P365. She bought it because she’s been worried about the increasing crime in her area.

The Lewises are part of a growing cohort of African American gun owners. Nationwide, surveys found that 25% of Black adults owned a gun in 2021, up from 14% six years earlier.

Gun buying among African Americans has soared in recent years. At the same time, suicide rates have increased among young Black men. Experts believe the trends may be linked, because having a gun in the home increases suicide risk exponentially, for every person who lives there.

But even gun enthusiasts say that the newest generation of gun owners sometimes lack the training and information they need to keep themselves safe around firearms. Homicides in Missouri reached a record high in 2020, spurring even more people to buy guns. But the number of suicides in the state was even higher, and the suicide rate has been on the rise for a decade.

That’s where Bill Mays works — in the fraught space where gun ownership and suicide intersect.

As a firearms trainer and an advocate of “concealed carry,” Mays has been part of the St. Louis gun community for years. He said he knows how to talk with fellow gun enthusiasts in ways that health experts usually can’t — especially about sensitive subjects like suicide risk, mental health issues, and crisis management for gun owners.

“It’s a matter of, ‘If it walks like a duck, talks like a duck, then what is it?’ I’m a duck!” Mays said. Mays is Black and works for the Safer Homes Collaborative, a project based at the University of Missouri-St. Louis. The effort aims to persuade gun sellers, gun owners, and their relatives to create systems for temporarily preventing people experiencing a crisis from accessing firearms.

Suicide is usually an impulsive act. One study found that nearly half of survivors reported that the time between first considering suicide and making an attempt was 10 minutes or fewer. If people in crisis can be kept away from a means of killing themselves for even a short period, their risk of dying can drop dramatically.

“That’s the thing about suicide, is that you can have that feeling, but if someone intervenes, you know, that feeling can easily go away,” Mays said.

A few years ago, Mays said, he was having suicidal thoughts himself. He remembers one episode when a phone call with his daughter pulled him out of the crisis.

Firearms are a focus of suicide prevention efforts because they are more efficiently lethal than other methods. Nine in 10 people who attempt suicide with a gun die.

Missouri’s Safer Homes Collaborative is modeled on the New Hampshire Gun Shop Project, which sought to soothe any fears about stepping on Second Amendment rights by enlisting gun owners to deliver the message, as part of a strategy called “means reduction” — a twist on the concept of “harm reduction” in addiction treatment.

Proponents of means reduction say suicides can be reduced significantly if businesses refuse to sell firearms to people who are in crisis and if family members temporarily keep guns away from people who feel suicidal.

For decades, the suicide rate of older white men has been among the highest in the U.S., in part because of their high rates of gun ownership. Having a gun in the home increases the suicide risk for everyone who lives there.

However, suicides rates among young Black men increased almost 50% nationally from 2013 to 2019. And the suicide rate for younger Black children (ages 5-12) has climbed and is more than double the rate for younger white children.

Although the overall suicide rate for white Americans — including teenagers — remains much higher than the rate among African Americans, the new trends concern Deborah Azrael, associate director of the Harvard Youth Violence Prevention Center.

Azrael co-authored a new study estimating that from January 2019 to April 2021, around 16 million Americans had guns introduced to their homes for the first time. Of the new buyers, about 20% were Black.

Azrael said it’s time to update assumptions about who may be in danger: “Gun ownership is more diverse now, and so when we talk to people about the risks of guns, we want to make sure we’re reaching out across the board, and not just to the people we’ve typically thought of as gun owners in the past.”

Similarly, stereotypes about who is “typically” at risk for suicide are changing. Reba Rice-Portwood said that when she was growing up in St. Louis in the 1970s and ’80s, suicide was seen as a problem that existed outside her African American community.

“When someone would die by suicide and if we heard about it on television or we read about it or something like that, we would always assume that it was a Caucasian,” said Rice-Portwood, 55.

Her thoughts about that changed abruptly and tragically several years ago when she lost Ricky, her son.

Rice-Portwood said Ricky had an “old soul.” He loved Sam Cooke and looked out for older people in his apartment complex. She said her son was also tormented by depression.

One day in 2014, she got a frantic call from her son’s fiancée, who told her that Ricky had shot himself. He was only 22.

“What did I do so bad in this life for God to allow my son to pass?” Rice-Portwood asked.

She strained to understand how her son, who was known to struggle with mental illness, managed to get a gun, a question that remains unanswered. And then, amid her grief and confusion, came some surprising news: Ricky’s fiancée had discovered she was pregnant.

Today, Rice-Portwood is raising her grandson, Jackson, who’s 6 years old. On a Saturday morning at her apartment, he shows off his multiplication skills on a tablet while “Granny” beams.

After working many years inside jails, Rice-Portwood became a mental health counselor. Nowadays, she’s outspoken about the need to address trauma among young African Americans in St. Louis. She grapples with how to stop the spread of gun violence, especially when the proliferation of firearms in her community seems impossible to contain.

Despite what happened to her son, Rice-Portwood keeps a .380 pistol in a safe at home. Like Sharis Lewis, she’s a gun owner for one big reason: fear of crime. “Actually, I went to the grocery store about three weeks ago, you know, and was almost carjacked,” Rice-Portwood said. “That’s the reason why I still have it now.”

St. Louis had the highest homicide rate among large U.S. cities in 2020, according to FBI data.

Self-defense is the main reason people buy guns, according to a 2017 Pew Research Center survey, but many Black gun owners say that, for them, self-defense can be a thorny concept.

Sharis Lewis started carrying a firearm because she isn’t comfortable with the idea of calling police for protection. The Lewises live in Florissant, not far from Ferguson, where Black resident Michael Brown was killed by police officer Darren Wilson in 2014.

“Some people, they rely on law enforcement, which, for African Americans, that’s not always the safest course of action either,” Sharis said. “I would rather control the situation.”

For Bill Mays and his friends, discussions about self-defense and guns have taken on increased urgency.

At the BBQ restaurant next door to the SharpShooter range, Bill Mays met up with the Lewises. After placing lunch orders, they launched into talking about firearms, and recent incidents of violence against African Americans.

Mays said his work in suicide prevention and a renewed interest in religion had changed his relationship with firearms. Mays recently stopped carrying a gun, though he continues to hunt.

“I think a lot about the Bible. And the experience with Jesus — would Jesus walk around with a firearm? Of course not,” Mays said. “But it’s more than that. It’s just a point of — I don’t want to hurt anybody.”

But he wants to keep helping the people who do carry guns, especially the newest gun owners. And he hopes that those conversations, however tough, might help prevent suicide deaths in Missouri.

This story is from a reporting partnership that includes KCUR, NPR, and KHN.