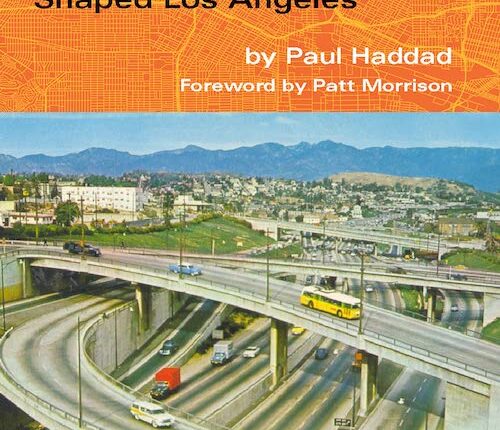 GET ON THE Hollywood Freeway from Downtown and drive northwest past the Vermont Avenue exit when the lanes split to create a long oval, seemingly without function. That’s the ghost of a project that didn’t happen: the planned interchange with the never-built Beverly Hills Freeway.

Take the exit at Highland Avenue and wonder — not for the first time — why the on-ramp and medians outside the Hollywood Bowl are broader than a prairie and create a white-knuckle merging experience for the northbound. Ambitious Caltrans officials, flush with eminent domain money and world-saving intentions, had intended it to be the southern terminus of the Whitnall Freeway, which would have tunneled under Mount Lee, just as the Arroyo Seco Parkway had been carved out in 1936 to create a dazzling portrait of the landscape for those motoring up to Pasadena.

Freeways have become so thoroughly ingrained in the civic mentality and vocabulary of Los Angeles that they seem like the ocean, the mountains, and the basin — arosen intact; always ready; always relevant; a timeless patrimony of light gray slabs. But it wasn’t always like that. Our roads are the products of specific forces between 1940 and 1980, and they could have looked far different, or never happened at all, if national politics had taken a stingy turn, or if East Los Angeles had had as much economic juice as Beverly Hills.

Two new books throw light on Los Angeles thoroughfares as living things, still in evolution, with markers of their origins scattered here and there. Paul Haddad’s Freewaytopia: How Freeways Shaped Los Angeles is a marvelous civic history of 12 essential routes that belt the urban expanse, all creations of the bikini and slide rule era. Meanwhile, Karen Halverson’s photo collection Mulholland invites us to contemplate the spinal throughway of the Santa Monica Mountains in shades of charm and menace.

Jonathan Swift said he hated humanity but loved individual people, and it’s correspondingly easy to love the concept of speed and efficiency while hating specific Los Angeles freeways. They’re frequently choked beyond capacity and generally not attractive, the legacy of a frenzy brought on by the Federal Highway Aid Act of 1954 — in an era of fat budgets and mass-produced American public architecture. Dwight Eisenhower promised “broader ribbons across the land,” aiming to make suburbia blossom — and to provide quick escape routes in case Russian ICBMs came calling.

The boosterish Los Angeles Times applauded loudly for a city that would “look from the air like an old woman with varicose veins,” but none embraced the mission more vigorously than the California Department of Transportation, who looked favorably on the 1920s “stopless motorway” winding up the banks of the gulch between Downtown Los Angeles and Pasadena, funded by city taxes. We know it today as the Arroyo Seco Parkway, with tire-skidding turns and on-ramps so short they could be measured with a schoolhouse ruler. But it was the nation’s first real expressway and a model of the neighborhood-plowing that was to come, even as the critic Kurt von Meier claimed the interstate project had “the inventive and creative qualities of works of art.”

Haddad writes with the love and skepticism of a native Angeleno, mining the archives for the distinctive news items that function as collective folklore: the streaker who interrupted the opening of the Hollywood Freeway. The accident victim flung from his car to the top of a green reflective sign. The sulfur spring at the stack of the 110 and 101 where the frontier city’s gallows used to stand. The legend of the buried treasure near the Wonder View neighborhood in Cahuenga Pass. The regular filming of CHiPs on a section of the unfinished Foothill Freeway near Tujunga.

Freewaytopia is bulletproof to a negative review because it delivers exactly what it promises: a lively and fact-driven history of 12 freeways that adds up to a Los Angeles realist canvas. Most chapters have set rhythm and elements. Caltrans officials draw a line on a map, houses get purchased, people get angry, judges rule, an earthquake hits, a ribbon gets cut, a few noteworthy felonies get committed, and traffic helicopters fly overhead.

Along the way are intriguing glimpses of the local machers who made it happen or stood in the way: Kenneth Hahn, the acerbic young county supervisor; Vincent Thomas, the boxer-politician with a heart of gold; Marilyn Jorgensen Reese, the Whittier housewife who also happened to be the chief architect of the graceful 405-10 interchange with flyovers that don’t need a single tap on the brakes; Adriana Gianturco, the Caltrans official nicknamed “Diamond Lady” who took a rush hour of heat for championing the first HOV lanes on the Santa Monica Freeway. In fact, if there is a shortcoming in this otherwise exemplary book, it would lie in Haddad’s focus on roadbuilding to the exemption of a broader sociological look at the Los Angeles of the era. What was happening outside the berms that made it thus?

Haddad’s prose shines. “If freeways are LA’s cathedrals,” he writes of the dreaded 405-101 junction, “then this meat-grinder interchange is the Church of Perpetual Congestion.” The frequently changing Caltrans maps contain “broken lines resembling the diagrams of a drunk football coach.” He also has an eye for local goofiness: the egomaniac Griffin J. Griffith who donated land for his namesake park always makes good copy. There are points where he hits a pothole — the 10 really should not be called “a cosmic journey to the coast during the height of beach culture and surf rock” — but these errant brush strokes are few in an otherwise well-written narrative. Freewaytopia is an easy read that packs a factual wallop.

The pages look a lot more inviting, too, than the Harbor Freeway’s canyons or most books on transportation that drown in statistics and repel readers with blocky and uninviting paragraphs. The publisher, Santa Monica Press, has larded them with historic and modern photos that provide intuitive context to the freeway biographies. A minor design complaint, though: the ponderous narrative bibliography should have been flipped into terse endnotes for those who like seeing the homework.

One especially arresting aerial photo shows the 10 cutting an ugly ivory-colored path through the neighborhoods just southwest of Downtown in its initial earthmoving phases — a reminder of the permanent damage meted out to communities who couldn’t defend themselves against the evictions and erasure that inevitably came with the freeways. Other photos showcase the design customs of the hard-charging 1950s and remind us of the liberal consensus power structure that pumped out nuclear weapons and hydroelectric dams in the same period, whether they were needed or not, now regarded as dangerous wastes. Budgets and careers were at stake; everything looked like a nail. Neighborhoods of color paid the biggest price, of course, before the spree was over. West Adams was never the same after the 10. The dubious Century Freeway tore through thriving Latinx neighborhoods and devastated Lynwood.

Sometimes the naysayers got a victory, even partial. Perhaps Haddad’s most illuminating chapter tells the story of the Glendale Freeway — the 2 — once named by KPCC listeners the most “tolerable” of Los Angeles’s big arteries, a title it earns with low traffic volumes and soaring angles as it ascends the outermost skirts of the San Gabriels, a truly memorable effect on clear days. But nobody will write a poem to its southern end, which dumps its traffic load onto Glendale Boulevard near Alessandro without linking up to the 101 just a few miles away. This part of the city was once Los Angeles’s most bohemian neighborhood, a mini-San Francisco, home to radical journalist Carey McWilliams, the renegade theologian Antonia Futterer, and the filming locations for hundreds of silent films. In the early 1960s, Caltrans bought up 123 homes and hundreds of apartments in this valley, intending to plow the 2 further south. A rare example of resident resistance kept the end where it was but not before the uncertainty, stop-and-go traffic, and shifting property deeds slowed investment in the area and created a scruffy look around it that persists today. In a statement of prime numbers that also functions as a SoCal modernist judgment, the 2 should have ended at the 5.

One of the region’s longest roads is also a terminally unfinished project, born of high visions and reflecting the regional quirks of the landscapes it occupies, as well as a distinct unease. In contrast to Haddad’s lively and people-choked pages, Karen Halverson’s 41 panoramic photos of Mulholland Drive leave a viewer feeling lonesome, as if Edward Hopper had come west with a camera.

The 50-mile road, broken in places by unfinished segments, was intended as a memorial to William Mulholland, the immigrant Irish ditchdigger who rose to the heights of local esteem as the director of the Department of Water and Power. His name will always carry an air of majesty for bringing Owens Valley water via an aqueduct — and also an element of sin for the same deed.

Most journeys on Mulholland go westbound, atavistically seeking the sea, but Halverson makes the intriguing choice to travel toward urbanization, starting her collection with a striking image of the highway slashed into a hillside with the Pacific peeking over the horizon. The far stretches of the road in Ventura County are a reminder that Southern California can be steep, rough, and shockingly green, particularly with lush chapparal after winter rains. Some of Halverson’s photos look almost Scottish in their damp moodiness.

She has an eye for the precarious intersection of infrastructure and wild growth. One shot features a row of new breakaway cable terminals at the side of the road, as if recently replaced after a car plunged off the side. Another is a blunt close-up of a broken palm tree; a chain-link fence intrudes into another view; still others feature riotous and colorful bushes hemmed in by developers’ property lines. We’re led to ask, who is the real intruder here?

The effect of both these excellent books is to make us more aware — perhaps even suspicious — of the roads under the tires and to see them not as frozen slices of macadam but as living entities suspended in an uneasy détente with their surroundings, more unstable than they seem evolving and decaying.

In an eloquent foreword to Mulholland, the author and historian David Kipen (disclosure: a friend) writes about the four essential sections of this road. There are the rural western miles that look like certain ranch roads in Wyoming. Then there’s “Dirt Mulholland” closed off by a low fence and open only to pedestrians — a section that almost became part one of Los Angeles’s thankfully never-built freeways, this one to Malibu. Then there’s Mulholland Drive going past the mansions of the superrich, the make-out spots of thousands of local high schoolers, and the sites of many celebrity DUI arrests. And finally: “Ghost Mulholland,” a remaining fragment of the time when designer DeWitt Reaburn meant the picturesque highway to run all the way to Griffith Park. One imagines it would have linked up with the eventual Golden State Freeway if funding hadn’t run out.

Just as small archeological clues to their origin stories can be spotted underneath the bland surfaces of freeways — you can never unssee that oval in the middle of the Hollywood Freeway once you know what it was supposed to be — Kipen tells us where to find the traces of “Ghost Mulholland,” a dirt road underneath the Hollywood Sign on Mount Lee, not far from where the Whitnall Freeway was supposed to take us all into a bright interconnected future.

Tom Zoellner is the politics editor of LARB.