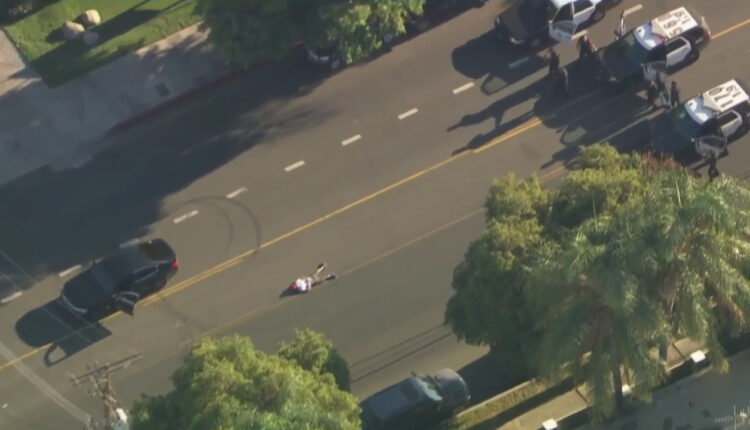 A man suspected of a lethal weapon attack led authorities on Friday in a pursuit through the San Fernando Valley and was eventually arrested in Van Nuys.

The chase for the black BMW began in Mission Hills shortly before 4:50 p.m. after a driver who was wanted on suspicion of assault with a fatal weapon, Los Angeles police said. The driver is accused of an attack with gunfire that took place two weeks earlier, the police said without giving any information.

Sky5 was above the chase around 5.15 p.m. when the vehicle drove at high speed through residential areas of San Fernando.

The car briefly ran into oncoming traffic in the area of ​​Truman Street and Maclay Avenue and almost collided with other vehicles several times.

The driver meandered through traffic on San Fernando Road and drove back on the wrong side of the road to pass vehicles during rush hour.

The BMW then drove down Sepulveda Boulevard and began slowing down Saticoy Street east on Willis Avenue. The driver poked his head out of the windshield and began to move with both hands as the car crawled forward.

The driver, who was wearing a red hat, seemed to be holding something. Police later said they believed it was a bottle or some garbage.

As the patrol cars approached, the driver accelerated and then stopped again. At least five patrol cars stopped behind the BMW on Saticoy Street and Tobias Avenue, and the officers drew their guns.

Then the driver got out of the vehicle, raised his hands and surrendered. He was taken into custody a few moments later, around 5.45 p.m.