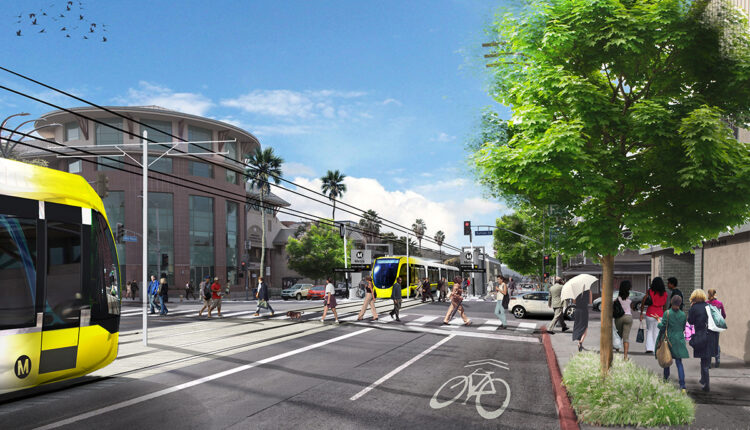 The proposed East San Fernando Valley Light Rail Transit Project is making progress toward the estimated $2.8 billion to $3.6 billion needed for completion, according to an article by Steve Scauzillo published by the Los Angeles Daily News.

The Federal Transit Administration (FTA) announced $909 billion for the project early in May, then allocated an initial $100 million of that total a few weeks later. The funding was awarded through the FTA’s Expedited Project Delivery Pilot Program.

“A total of 14 new stations are planned as are nine traction power substations, on overhead contact system, 34 vehicles and a maintenance and storage facility planned for Keswick Street. Once completed, it is estimated to carry 35,000 riders per day, according to LA Metro.”

The proposed project could eventually become the first rail transit project built completely in the San Fernando Valley since Pacific Red Cars stopped operating in 1952, according to Scauzillo. (The B Line, formerly the Red Line, has two stations located in the Valley. The Los Angeles County Metropolitan Transportation Authority’s Board of Directors also approved a bus rapid transit route that would connect North Hollywood to Pasadena in the adjacent San Gabriel Valley earlier in March.)

The Metro Board of Directors approved the preferred alternative for the East San Fernando Valley Light Rail Transit Project in July 2018, and approved the environmental impact report for the project in December 2020.

What’s the holdup with LA composting? And what you can do