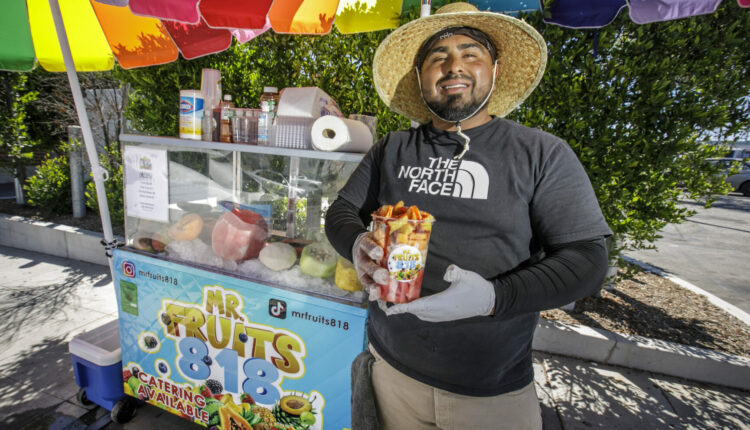 “They generate tremendous economic activity in LA; however, there have been a number of systemic barriers that have kept them from fully participating and being fully incorporated into the formal economy,” Bowles said.

One of the barriers for vendors is that the actual permitting process is complicated and expensive.
“The number I saw is that they can spend on average $30,000 for permits and equipment, which for a small micro-business just starting out is a pretty substantial startup cost,” Bowles said.

An August 2021 report on street food vending by the UCLA School of Law Community Economic Development Clinic and Public Counsel, titled “Unfinished Business,” put the total startup costs at between $10,490.00 to $14,194.00 to sell unpackaged food.

Additionally, many of the applications and forms that vendors need to complete to obtain permits and other licenses are unavailable in anything other than the most widely spoken and used languages, Bowles added.

“Primarily they are in English, and so there are language barriers that also exist,” she said. On the Los Angeles Bureau of Street Services website, the page with street vending brochures lists 12 languages ​​other than English available to download.

According to a post by the Los Angeles Street Vendor Campaign at the LA2050 website from September 2019, there were some 50,000 street vendors in the city representing a $504 million industry.

In November 2018, the Los Angeles City Council passed an ordinance making street vending legal in the city.
“With legalization, we can expect to see these numbers (50,000 vendors) grow as street vending becomes a safer way to make a living — especially for women and people of color,” the street vendor campaign post stated.

A year before the council’s action, it passed an ordinance decriminalizing street vending over fears that immigrant vendors could be jeopardized by criminal charges under the then-Trump administration, limiting the possible penalties to administrative fines.

Outside the parking lot of the 24-Hour Fitness on Empire Avenue in Burbank, Andrew Gallegos can be found six days a week selling cups of fruit from his cart, Mr. Fruits 818.
The 29-year-old San Fernando Valley resident said that the hardest thing about being a street vendor these days is access to a commissary, a necessity to get a permit to operate from the Los Angeles County Department of Public Health.

“The health department will not give you a permit if you don’t have a commissary to go to,” Gallegos said. “A commissary is a must before you even apply for a permit.”
The commissary is where the fruit that Gallegos sells is cut, and where his cart is washed and cleaned.

There are commissaries in the east valley, but they cater to food trucks. So Gallegos said he goes to one in Northridge, in the west Valley. For the crushed ice he needs to keep his fruit chilled, he goes to North Hollywood. Traveling to both places takes time and gas.
“It is (a) hard situation for a lot of fruit vendors because gas is expensive,” Gallegos explained. “With the little money that we do make we try to come out here and provide for everybody who is in need of fruit.”

Gallegos has taken advantage of the services offered by Initiating Change in Our Neighborhoods Community Development Corp., or ICON CDC. The nonprofit, which has offices in Pacoima and Van Nuys, is currently assisting Gallegos in getting his DBA, a “doing business as” designation.

Last month, it was announced that ICON would receive $500,000 in state funding to provide microgrants to street vendors, as well as for entrepreneurial training. The money, which comes from the Social Entrepreneurs for Economic Development (SEED) program of the California Employment Training Panel, is meant to help the entrepreneurship of immigrants and individuals with limited English language skills who face significant employment barriers. State Senate Majority Leader Emeritus Bob Hertzberg said he appreciated ICON’s long history of supporting small Valley business owners.

“They have the experience, and local vendors trust them to run this program,” Hertzberg said in a statement. Vendors like Jorge Hernandez.
Hernandez currently operates a street vending cart selling sandwiches in Van Nuys and Pacoima that are native to his hometown of Jalisco, Mexico. Traditionally made on small loaves of baguette, the bread is toasted in a panini grill after being drenched in a spicy sauce and topped off with Mexican crème. It is then filled with pork, including pork loin or pulled pork, Hernandez said through an interpreter, Elizabeth Padilla, a project manager at ICON.

Like Gallegos, Hernandez has also taken advantage of ICON services, including business classes. There were many things he was not aware of until he started the ICON programs. He then realized that there was a lot of free information being offered, Hernandez said.

“Thanks to the program I am able to advance in my project and benefitted from all the classes that I took, and all the training, and I hope to establish legally soon,” he said.
Hernandez added that he had already received some of the permits that are easier to obtain, like a city of Los Angeles business license, a state seller’s permit and a food handler’s permit.

“I am working on getting an approved food truck permit if I can get the funding, and then finally get my health department permit (from the county),” Hernandez said, through Padilla.

Kyrie Irving Purchases A $3.7 Million Mansion In Los Angeles, Fuels The Fire That He Will Join The Lakers This Summer