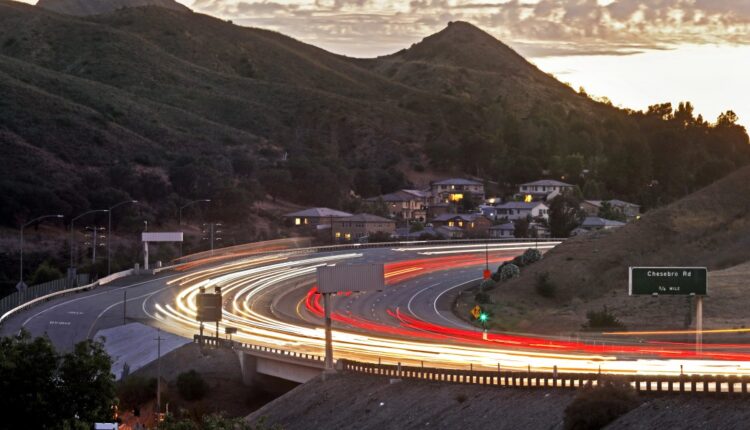 The architect Robert Rock is faced with a Herculean task: design a bridge that will allow mountain lions to safely cross a stretch of Freeway 101, which roars with 300,000 vehicles every day.

He stood on the top of a hill one recent morning, looking out over steep, fire-free slopes, rocky arroyos, weedy bumps, and 125-degree slopes on either side of the freeway at Liberty Canyon in the town of Agoura Hills.

The terrain was as challenging as possible. But Rock could see the future – cougars, who otherwise would become a roadkill, crossing a proposed $ 87 million bridge so they can roam, find prey, and mate.

It was a team effort to get approval for the proposed $ 87 million Mountain Lion Bridge that spans the 101 Freeway in Agoura Hills. Living Habitats lead architect Robert Rock, third from left, speaks to the group about plans for the wildlife bridge on June 20.

“Mountain lions tend to wander around,” said Rock, 40, raising his voice to be heard over the noise of highway traffic. “A wildlife crossing here is our best hope of saving them from extinction.”

That’s a good metaphor for the new collaborative city-wilderness relationship that a team of architects, federal biologists, conservation groups, and government agencies are trying to symbolize that represents the proposed wildlife crossing at Liberty Canyon.

The freeway was a product of the post-war boom in the 1940s and 50s that resulted in sprawl that separated much of Southern California from nature. It was a time when subdivisions continued to expand and the Los Angeles River was being redefined as flood control infrastructure in the same category as power grids and highway systems. Artist’s impression of a planned $ 87 million Mountain Lion Bridge over the 101 Freeway in Agoura Hills.

Future historians can look back on wildlife crossing as a global model for conservation projects that advocate the idea of ​​coexistence with nature, not rule over nature.

When completed, the 200-foot long and 165-foot wide bridge will be the largest of its kind in the world.

Over the past six years, interest in the proposal has grown and gained momentum – and with it the estimated costs.

The nonprofit National Wildlife Federation’s #SaveLACougars campaign needs to raise around $ 65 million by August to avoid costly delays and complete construction on schedule by 2025. Beth Pratt is the California Regional Executive Director of the National Wildlife Federation and campaign director for Save LA Cougars.

“We have secured $ 38 million to date for the construction,” said Beth Pratt, the group’s regional executive director in California. “That leaves about $ 27 million outstanding, and that’s the amount we need to raise to break the ground in time this fall.”

Scientists say wildlife hybridization is critical to restoring gene flow between small, isolated populations of pumas trapped south of the highway in the Santa Monica Mountains and pumas north of the Simi Hills and Santa Susana Mountains.

Recent studies predict extinction probabilities of 16% to 28% over the next 50 years for these lions, which, along with the critically endangered Florida panther, have the lowest documented genetic diversity for the species.

That’s partly because the 101 Freeway presents a near-impenetrable barrier to gene flow for the mountain lions, which biologists consider to be one of the most endangered mammals in North America. 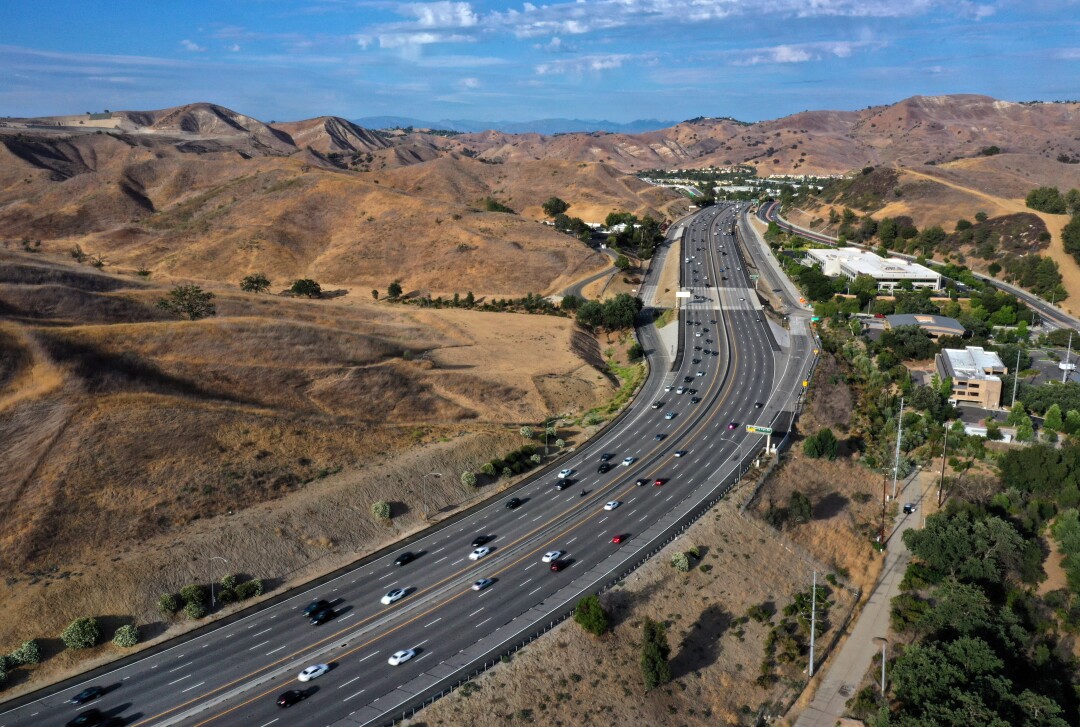 The 101 Freeway stops larger animals on both sides, preventing the flow of genes between them and endangering some species.

Brad Shaffer, an evolutionary biologist at UCLA, hopes the wildlife crossing will reshape not only the landscape for their top predator, but the character of Southern California as well.

“From a biological point of view,” said Shaffer, “large predators like mountain lions have beneficial effects on everything in the food chain – from mule deer to ground squirrels, lizards and insects.

“In addition, the construction of a wildlife crossing to bring them over one of the busiest highways in the country sends a strong message to the world that Angelenos cares about nature’s role in all of urban life,” he said.

As the bridge crosses the interstate, Caltrans will oversee the design and construction – but the transportation authority does not provide funding. Instead, most of the funding comes from over 3,000 private, philanthropic, and corporate donors around the world, including a recent $ 25 million Challenge Grant from Wallis Annenberg and the Annenberg Foundation. 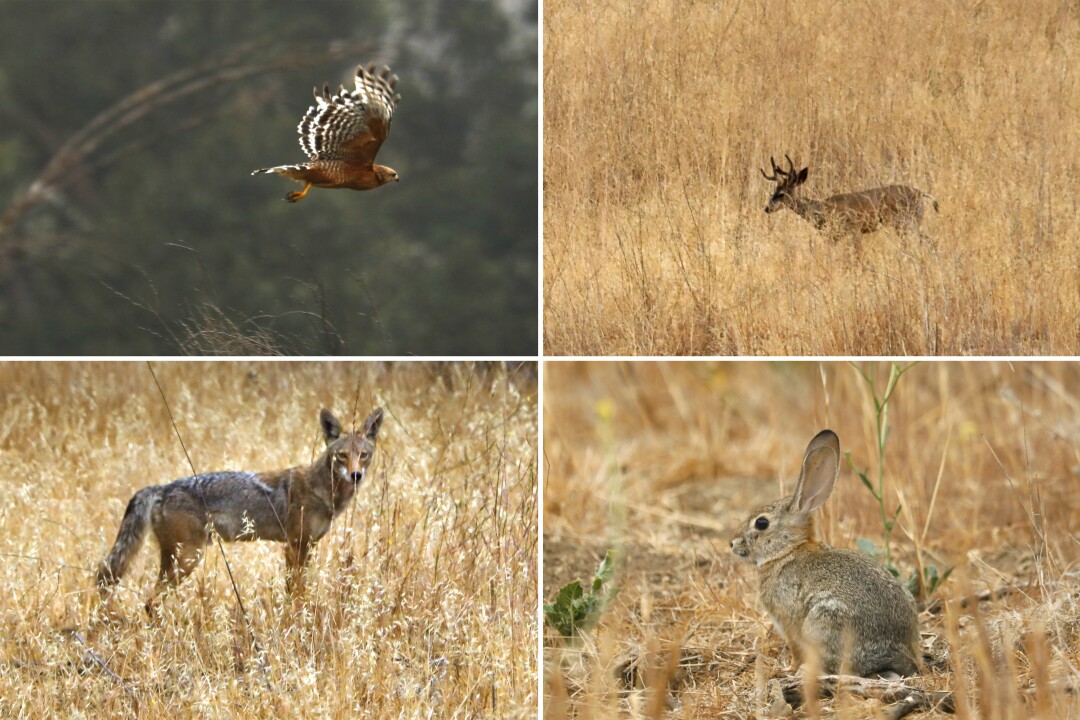 Wildlife is abundant in Liberty Canyon, including hawks, deer, coyotes, and rabbits, where a proposed $ 87 million mountain lion bridge over the 101 Freeway in Agoura Hills could lay the foundation later this year.

“We can coexist side by side with wild and plant species,” said Annenberg, “instead of isolating and paving them.”

As envisioned by Rock and Caltrans, pumas move unnoticed across a wilderness of reinforced concrete and steel laid out with native vegetation including oak and willow, irrigation systems, and shielded with baffles and light baffles to dampen the effects of noise and glare from the headlights below .

Fences up to 12 feet high would drive wildlife such as mountain lions, bobcats, deer, coyotes, skunks, badgers, squirrels, mice, and lizards across the passage. To reduce road damage, the fences would also extend several miles in either direction from the project floor plan.

Another project challenge is the development of “natural looking” abutments, driveways and walls that are expected to provide a home for small animals, birds and insects.

A safety net is installed so that nothing falls on the street. “The genetic diversity of our mountain lions is dangerously low,” said Jeff Sikich, a biologist at the Santa Monica Mountains National Recreational Area and an expert on local mountain lion populations. “Now we’re starting to see physical evidence of this.”

Since 2020, he and other wildlife biologists have discovered three mountain lions in the Santa Monica Mountains with the distortions of inbreeding – one tail is kinked like the letter “L” and only one testicle descent.

The pumas represented the first documented physical manifestations of extremely low genetic diversity among the dozen mountain lions that roam 275 square miles in and around the Santa Monica Mountains National Recreation Area, that of the Pacific Ocean, Freeways 405 and 101, residential and commercial developments and agricultural fields.

Roadkill also takes its toll. Since National Park Service biologists began researching mountain lions in Santa Monicas in 2002, motorists have struck and killed at least 17 of the big cats in the study area, federal officials said. 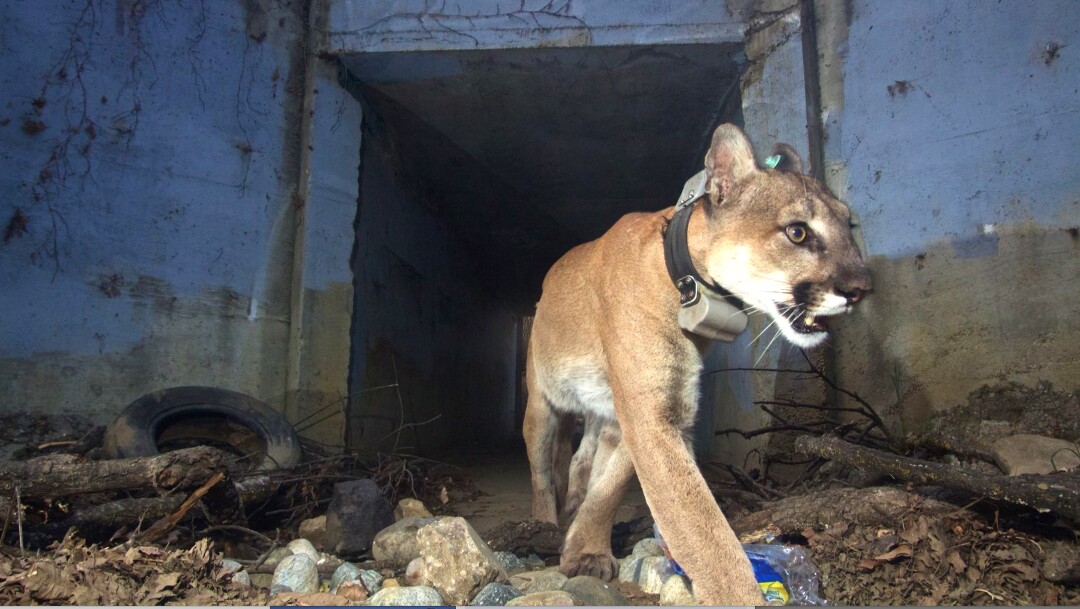 May 2018 photo of the P-64 Mountain Lion using a tunnel to traverse a freeway in the Santa Monica Mountains. The lion died in the Woolsey fire.

Mountain lions as a species are not threatened in California. However, a petition recently submitted by the Center for Biological Diversity and the nonprofit Mountain Lion Foundation to the State Fish and Game Commission argues that six isolated and genetically distinct cougar clans from Santa Cruz to the U.S.-Mexico border make up a subpopulation that are listed should be considered endangered.

A final decision by the Commission is expected later this year.

In the meantime, the Wildlife Crossing team is focused on completing a design that meets the needs of cougars and motorists along the 101 Freeway – the main north-south route covering the greater Los Angeles area, the Bay Area, and the north California coast connects – brings in harmony.

Rock specializes in blending structural design and environmental performance. In 2017, his company helped design the Obama Presidential Center on Chicago’s South Side. He is currently working on projects to reduce rainwater flooding in a historic Black Community in Cook County, Illinois, and is also protecting Los Angeles County’s puma from extinction.

“Southern California has always been a place of novelty, innovation and inspiration,” he said. “In this case, it means creating a new type of scenic back road for wildlife on one of the busiest highways in Southern California.”