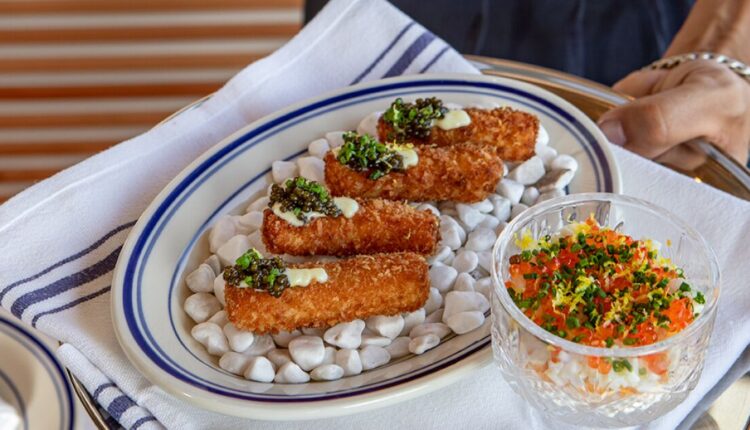 Dear John’s, the Culver City throwback steakhouse that extended its run earlier this year, now has a sibling seafood spot in Marina del Rey. The trio of Hans and Patti Röckenwagner (of Röckenwagner Bakery Group) and Josiah Citrin (chef-owner of Mélisse, Charcoal and Citrin) have opened Dear Jane’s on the water, with seafood towers, caviar-topped fish sticks, tableside shrimp Louie salad, crab cakes, linguine with clams and other classics that harken back to the 1960s through the 1980s. Dear Jane’s is open 5:30 to 9 pm Sunday, Wednesday and Thursday and 5:30 to 10 pm Friday and Saturday.

Downtown’s Hotel Per La opened with rooftop cocktail spot Bar Clara in July but this month debuted its rooms along with its ground-floor restaurant, Per L’Ora, which serves coastal Italian cuisine featuring international and LA flavors. Executive chef Courtney Van Dyke oversees the kitchen, which is serving dishes such as bone-in veal Milanese with yuzu dust; orecchiette in birria oxtail ragù with manchego; and bucatini with spam, egg yolk and nori. The lobby bar and lounge, also housed within the ornate Bank of Italy Building — formerly home to the NoMad Hotel — serves a globally inspired cocktail menu with options such as the Owl’s Castle, made with Japanese gin and vodka, sakura vermouth, sake and rose orange bitters. Per L’Ora is open Wednesday to Sunday from 5 to 10 pm, with bar service beginning at 4 pm

Some of the most popular plant-based burgers in Los Angeles and the Inland Empire are now available in Santa Monica. The fundraising, entirely plant-based Monty’s Good Burger has opened one block from the beach, serving the local chain’s signature meatless burgers, fried chicken sandwiches, fries, tots, house-made sauces, salads, shakes and floats. Monty’s is known for its pet adoption initiatives and animal rights fundraising, as well as collaborations with celebrities such as Travis Barker and Brockhampton. Monty’s is now open in Santa Monica Sunday to Wednesday from 11 am to 11 pm and Thursday to Saturday from 11 am to midnight. Pop-up coffee shop and roastery Be Bright is set to open a Melrose cafe next month, offering specialty drinks such as its ube-cream-topped cold brew.

Smorgasburg coffee stall, roastery and subscription service Be Bright has landed its first bricks-and-mortar location. The husband-and-wife team of Frank and Michelle La plan to launch Be Bright as a full cafe in Melrose in mid-October, offering specialty coffee drinks, a tea program and food such as sandwiches and fresh pastries.

Shipping-container alfresco food court SteelCraft is celebrating Oktoberfest at all three of its locations, hosting all-ages parties that will include beer releases and themed food menus across three weekends in October. SteelCraft Long Beach leads the festivities with a yodeling competition, stein-holding competition, costume contest and live band Oct. 1 from noon to 10 pm, while the Bellflower outpost follows suit on Oct. 8 and Garden Grove hosts its own Oktoberfest party on Oct. 29. Admission is free.