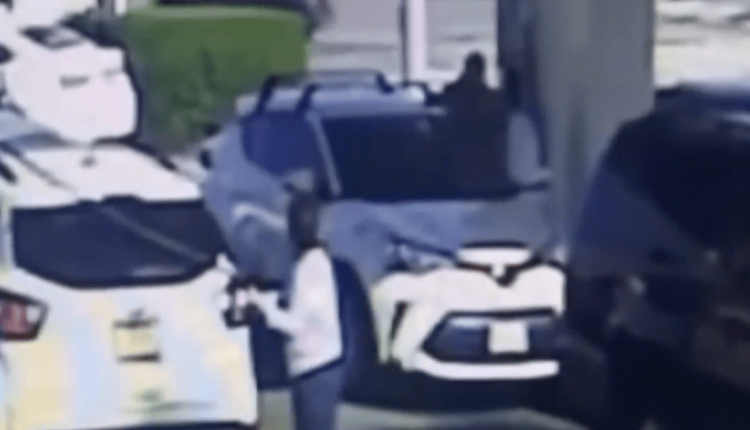 A surveillance camera recorded an attack resulting from an argument over the course of a gas station in San Pedro.

Anydenisse Cerezo, 24, suffered bruises on her arm and was slapped in the face by a man who accused her of cutting in front of him at the AM / PM Arco station on Gaffey Street. The U.S. Army veteran spoke to NBCLA about the altercation Thursday.

Cerezo and a man in a Toyota Tacoma entered the station from different entrances at the same time, she said. A van was about to leave and opened up space on two pumps, so Cerezo walked behind the van and prepared to drive forward and leave one of the pump rooms open to someone else, she said.

Then the Tacoma driver honked. The video from a surveillance camera shows the man acting aggressively towards Cerezo while she is sitting in her car.

“I said, ‘You know what, the pump in front of me is clear, so I’ll just keep walking,’ said Cerezo. “While he was too busy being aggressive with me, we lost the place. He got even angrier.”

The confrontation became violent about a minute after the first exchange, she said.

“He opened my door and got me out of my car,” said Cerezo. “I ended up slapping him in the face and he did the same. He hit me.”

Other people come to Cerezo’s aid. The man eventually escaped, but not before she wrote down his number for late approval of the driver’s license and filed a complaint with police for assault, Cerezo said. Updates on the investigation were not available from the LAPD on Thursday evening.

“I let him know, ‘Hey, if it had been someone else it could have been a completely different situation’ because there are veterans with PTSD,” said Cerezo. “You don’t approach someone, go in their face, open their door.”

No arrests were reported on Friday.