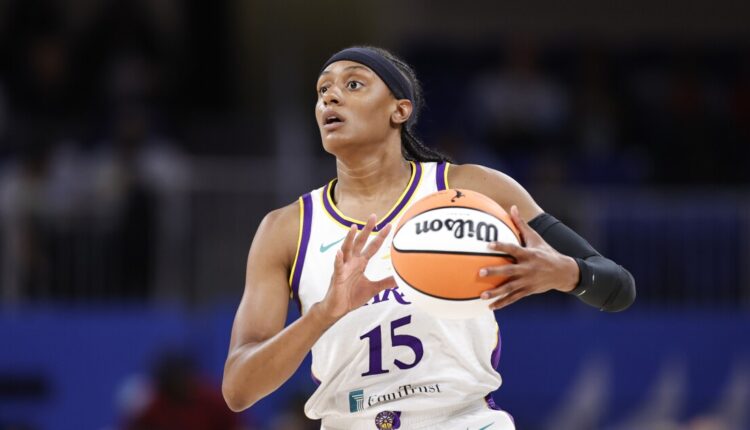 Brittney Sykes scored 21 points, including a driving layup in the closing seconds, and the Los Angeles Sparks kept their slim playoff hopes alive Sunday with a 79-76 win over the Washington Mystics.

The Sparks (13-20), who snapped a six-game losing streak, are one of five teams within two games of each other vying for the final two postseason berths. The Sparks are 1½ games back of seventh-place Atlanta (14-18) and a game behind Phoenix (14-19) for the final playoff spot with a week left in the regular season.

Washington is in a battle with Seattle for the fourth spot. The Mystics trail by half a game with two games left.

Sykes, with the shot clock winding down, kissed a left-hand runner high off the glass to give the Sparks a three-point lead with 39.7 seconds to go. Ariel Atkins answered with two free throws on the ensuring Mystics possession before Elena Delle Donne blocked a shot by Nneka Ogwumike and secured the rebound with 17 seconds left. Delle Donne missed a potential go-ahead jumper about 10 seconds later and Olivia Nelson-Ododa made two free throws to cap the scoring with 4.4 seconds to go.

Natasha Cloud attempted a potential tying heave from just inside half court as time expired and a foul was initially called, but then waved off by the officials and the game ended without review.

Samuelson made three-pointer to make it 22-19 in the opening seconds of the second quarter and Los Angeles led the rest of the way. Sykes made back-to-back baskets to give the Sparks their biggest lead at 40-27 late in the first half.

Myisha Hines-Allen scored 17 of her 20 points for the Mystics (20-14) in the second half and Atkins also contributed 20 points. Shakira Austin scored 16 points on six-of-nine shooting and grabbed 10 rebounds. Delle Donne shot only two of 12 from the field and finished with eight points and eight rebounds.

Kristi Tolliver (calf) and Chiney Ogwumike (face) did not play for the Sparks.