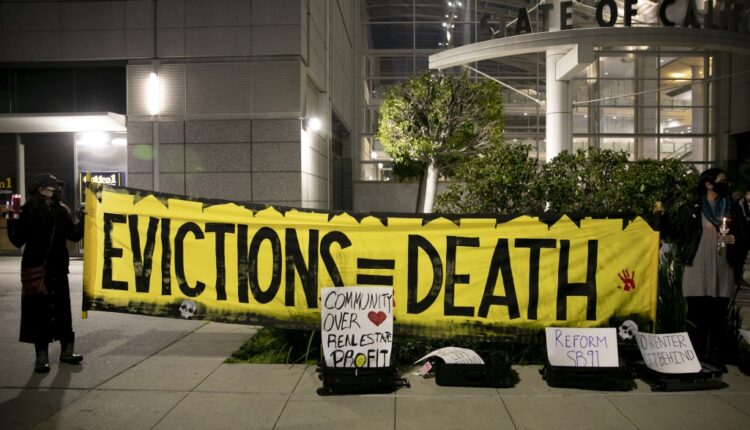 March 31 is the last day residents can apply for the state’s COVID rent relief program.

Starting April 1, landlords can move to evict non-paying tenants in cities or counties without local eviction protections in place — even if they have rent relief applications pending before the state.

On Tuesday, advocates urged Gov. Gavin Newsom and state lawmakers to “stop the eviction tsunami” by extending the rent relief program, citing a recent analysis that found only 16% of the nearly half a million renters who applied for state money had been paid as of early March.

“This is an emergency program designed to address the specific need that resulted from the pandemic,” said Nur Kausar, a communications manager for the state Housing and Community Development Department.

Kausar added that although the state’s rent relief application portal closes on March 31, the program “will continue to operate until all complete applications received are processed and all eligible applicants have been paid.”

Renters and landlords of these cities and counties can apply only through the state’s portal: HousingIsKey.com or by calling the state’s toll-free hotline (833-430-2122):

Renters and landlords in these cities must apply to their local program:

The report found that:

However, after surveying more than 44,000 parcels of surplus land, the state Department of General Services identified just 92 suitable for development. Of those, it’s made only 19 available for more than 1,700 units of affordable housing.

The department’s current pace means it would take another seven years to make the remaining 73 properties available — though adding just one staff member could slash that time by more than two years.

“The state’s need for affordable housing is significantly outpacing its production, which is negatively affecting Californians,” Tilden wrote. “High housing costs often result in families becoming behind on their rent and going without food, utilities, or health care. Further, a lack of affordable housing correlates with a significant increase in the number of people experiencing homelessness.”

Also Tuesday, Assemblymember Jesse Gabriel, a Woodland Democrat, unveiled a bill that would require the state to create an online database of affordable housing listings and help low-income applicants simplify their search for a place to live.

Housing and homelessness also played a central role in Tuesday night’s debate for the five leading Los Angeles mayoral candidates — as it did Monday when a group of homelessness activists shut down a candidate forum at a San Fernando Valley synagogue by screaming profanities at the participants.