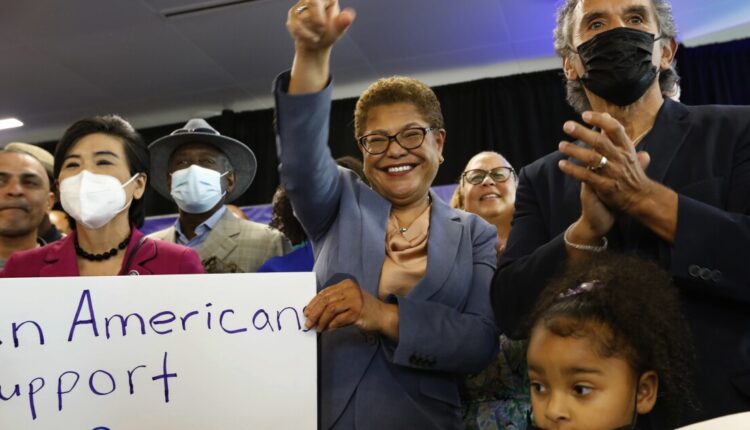 Los Angeles County officially finalized the list of candidates who will go head to head in the Nov. 8 runoff election, setting the stage for nearly a dozen bruising contests, including the mayoral showdown between US Rep. Karen Bass and real estate developer Rick Caruso.

Nearly a month after the June 7 election, officials from the Los Angeles County Registrar-Recorder/County Clerk on Friday certified the results in races for LA mayor, City Council, school board, supervisor and sheriff, identifying the outright winners in many cases and paving the way for the final round.

County officials spent weeks reviewing and tabulating late-arriving mail-in ballots, which offered results that were sharply different from the first snapshot on election night. The election, which saw more than 84% of ballots cast by mail, revealed the expanding political might of LA’s left, which succeeded in unseating a councilman and securing big gains for several other candidates.

Bass is now firmly the front-runner in the race to replace LA Mayor Eric Garcetti, finishing the primary with a seven-point lead despite an onslaught of expensive campaign ads from Caruso. In other contests, candidates who appeared to be trailing on election night are now in the lead or in much stronger positions for the runoff.

Bass is already deep into runoff mode, reminding supporters that Caruso registered as a Democrat only at the start of the year.

“You don’t become a Democrat to check a box,” she said this week at an event for her campaign’s gay, lesbian and transgender allies. “A Democrat is about a set of values, and there’s only one Democrat in this race.”

Caruso has been tending to his base in the San Fernando Valley, meeting in recent days with firefighters in Sunland-Tujunga and restaurant patrons in Porter Ranch — both neighborhoods that are among the city’s more conservative. The businessman, who spent tens of millions of dollars on his campaign, faces a much tougher time building support among elected Democrats, who might have “defected” had Caruso arrived in first place, said political consultant Eric Hacopian.

“By any measure, he underperformed, given his advantages,” said Hacopian, who is not involved in city races this year.

Caruso’s team disputed that notion and remained confident about his prospects.

“Rick went from single digits to a runoff in just a few months on the strength of his message around dealing with homelessness, crime and corruption,” said spokesman Peter Ragone. “This case, voters will have a clear choice between a politician who says she can’t fix homelessness anytime soon and a civic leader who can lower crime and clean up LA”

Nevertheless, Caruso faces questions about how much headway he can make in a city where progressive Democrats and, in some races, Democratic Socialists made trailblazing gains in down-ballot contests.

In the race to replace Controller Ron Galperin, accountant Kenneth Mejia maintained a nearly 20-point lead over his opponent, Councilman Paul Koretz. Mejia, whose campaign is energizing young voters, has called for deep cuts to law enforcement, a concept opposed by Koretz, a 13-year veteran at City Hall. Mejia had 43% of the vote; Koretz had nearly 24%.

Both of those contests now head to a runoff.

Meanwhile, LA’s chapter of the Democratic Socialists of America scored an outright victory on the Eastside, where its favored candidate unseated Councilman Gil Cedillo, a 24-year political veteran who served in Sacramento and at City Hall.

Cedillo lost to community activist Eunisses Hernandez, who will become the council’s first abolitionist — an advocate for dismantling prison systems, jail facilities and law enforcement agencies and funneling the savings into mental healthcare, addiction services, affordable housing and antipoverty programs. During the campaign, she said she would vote against the hiring of police officers, including recruits who would replace those who retire or resign.

In his concession statement, Cedillo said he had dedicated his life to public service and is grateful to have worked with “so many incredible people” to improve the lives of Angelenos.

The councilman — who tested positive for the coronavirus Sunday — said he is proud to have worked in Sacramento to ensure that residents, regardless of immigration status, have access to driver’s licenses. He also touted his work at City Hall, helping constituents weather the pandemic and building “housing of all types” across his district, which stretches from Highland Park to Pico-Union.

“I look forward to closing out my time on City Council, finishing projects and preparing to serve in a new way,” he said.

Hernandez, who had already declared victory, will be sworn in at the end of the year. In an interview, she thanked her supporters and said she will spend the coming months mapping out her strategy for the district. She promised to build on Cedillo’s accomplishments.

“We’re going to continue a lot of the amazing work that they’re doing and take it to another level, so that we get care and access to health services in our communities and deeply affordable housing,” she said. “I’m grateful to the incumbent for all the work that he’s done and all the groundwork he’s laid for someone like me to be able to run for office.”

The ouster of Cedillo was not the only success for LA’s left. In a district that stretches from Echo Park to Hollywood, labor organizer Hugo Soto-Martinez held a nine-point lead over Councilman Mitch O’Farrell. The contest now heads to a runoff. Activists with Democratic Socialists of America had campaigned heavily for Soto-Martinez.

Those first-place finishes have been celebrated for weeks by activists who have opposed plans for hiring more police and assailed councilmembers over their decision to prohibit homeless encampments near certain facilities, such as public schools and daycare centers.

Josh Androsky, a consultant who worked on the campaigns of Hernandez and Soto-Martinez, said the primary results show that LA’s left “had its biggest electoral victory ever.”

“To me, the most important and necessary outcome of this election cycle is that we are building a real progressive base,” he said. “I’ve lived here my whole life, and I’ve never seen anything like this.”

If the runoff follows the same pattern, LA will show that it is a progressive stronghold, protecting Angelenos at a time when the Supreme Court is “stripping away their rights,” he said.

Androsky said progressive activists could become even more active in two other council contests in the run-up to Nov. 8.

On the Westside, political aide Katy Yaroslavsky will face attorney Sam Yebri in the race to replace Koretz. And in communities near the Port of Los Angeles, attorney Tim McOsker will face off against neighborhood leader Danielle Sandoval in the contest to replace Councilman Joe Buscaino.

Meanwhile, State Sen. Bob Hertzberg will face West Hollywood Councilwoman Lindsey Horvath in the race to replace County Supervisor Sheila Kuehl, in a district that takes in parts of the Westside and San Fernando Valley.

At the Los Angeles Unified School District, two of this year’s three board races are heading to a runoff as well.

In the San Fernando Valley, LA Board of Education President Kelly Gonez failed to stave off a runoff and will face a challenge from high school Spanish teacher Marvin Rodriguez. Gonez, who had the backing of charter school supporters and district employee unions, was leading Rodriguez 48% to 31%.

On the eastern end of LA Unified, Rocío Rivas, an aide to board member Jackie Goldberg, will compete in the runoff against Maria Brenes, a nonprofit leader. Brenes had the backing of several union organizations, including the LA County Federation of Labor, and departing board member Monica Garcia. Rivas, who was leading Brenes 44% to 30%, was endorsed by the teachers union.

On the Westside, board member Nick Melvoin coasted to an outright victory, avoiding a runoff and earning a second term in office.