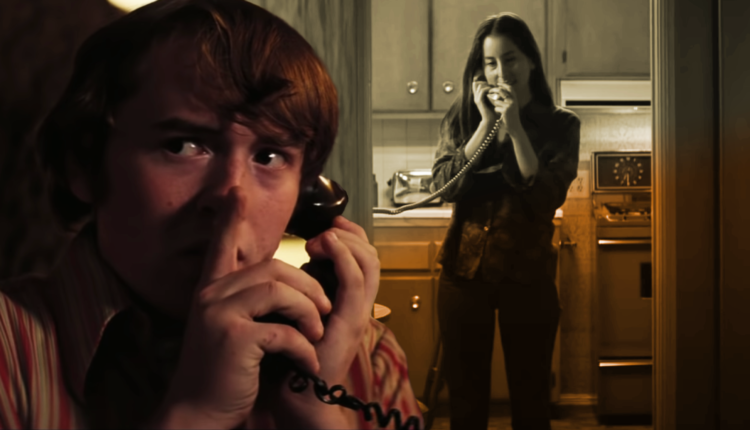 Paul Thomas Anderson’s Licorice Pizza concludes with an ambiguous final scene for Alana and Gary – here’s what the ending means for the film’s protagonists. Licorice Pizza is Paul Thomas Anderson’s ninth movie and follows Gary Valentine (Cooper Hoffman), a 15-year-old child actor and entrepreneur, and Alana Kane (Alana Haim), a 25-year-old photographer’s assistant, as the two meet, run around, fall in love, and help each other find themselves in the San Fernando Valley in 1973. From starting a waterbed company and pin-ball palace to joining a mayoral campaign, Licorice Pizza nostalgically depicts a moment in time of two people growing up with contrasting trials and tribulations of youth.

While many have said Licorice Pizza is told from the perspective of Gary as a fantasy about an older woman liking him back, the film is equally motivated by the conflicts of Alana’s character. Licorice Pizza, titled after a record store chain, begins as the charismatic Gary’s story of wooing an older woman, but slowly becomes Alana’s story, with the coming-of-age formula applying more to her journey than Gary’s. The age gap between Gary and Alana has been criticized by many viewers, but is fundamental to the internal conflicts and motivations of the two protagonists, whose love story is just as unconventional as their numerous misadventures.

Licorice Pizza ends with Gary and Alana realizing they don’t want to go on without one another, and accepting that they both have profound impacts on each others’ lives. On one momentous night, Alana runs from a dinner with Licorice Pizza’s real-life character Joel Wachs to Gary’s pinball palace, while Gary runs to find Alana after impatiently waiting for her to attend his opening night. After playing cat and mouse the entire film, Licorice Pizza’s ending sees the two passionately kiss before running off into the dark of the San Fernando Valley together, with Alana whispering “I love you, Gary” to close out the film. Here’s a breakdown of Licorice Pizza’s ending, including what the last moment means and what happened to the real-life characters.

Why Alana Kisses Gary & Tells Him She Loves Him

After Gary spends the majority of Licorice Pizza pining after Alana, the film ends with the two literally running to each other and kissing, with the last line being Alana telling Gary she loves him. In an odd way, Alana really does love Gary, but not in the typical coming-of-age romantic comedy manner. Alana Haim’s Licorice Pizza character loves who he is as a charming and ambitious individual who seems to have his whole life figured out at 15, while she idles in life during her mid-20s; plus he’s always there for her and makes her feel good about herself. Alana and Gary drive each other crazy because they both use each other to make themselves feel less insecure and they enjoy feeling needed, so they love each other in a messed up, self-serving type of way.

Gary likes having the attention of an older woman, which makes him feel far more mature and confident. Alana likes having the attention of a young guy who is extremely successful but still makes her feel superior because she’s older and more mature. Gary helps Alana find out who she is and get on track with what she’s doing in life, while Alana helps Gary validate the power of his charm and charisma despite his age. Licorice Pizza’s characters are very much soul mates at this time and place in their lives, but their love isn’t the typical kind of romantic movie love. The romance in Licorice Pizza is more about aching for this unsure, youthful, whirlwind time in peoples’ lives rather than the unconventional love story of Alana and Gary.

What Happens Next To Gary & Alana (Are They A Couple Now?)

Gary and Alana finally kiss and embrace at the end of Licorice Pizza, suggesting their romance is official. However, it doesn’t seem like Gary and Alana would become a real couple. Their relationship cannot legally go much further than just a kiss or unconsummated love, largely because of their age gap and the fact that Gary is still in high school. They’re emotionally attached to one another in a complicated case where they use each other to feel good about themselves, but Paul Thomas Anderson’s two Licorice Pizza characters actually getting together as boyfriend and girlfriend is far too much of a fantasy for the characters than reality . Following Licorice Pizza’s credits, Alana and Gary will likely maintain the same tumultuous romantic dynamic until they find someone else in a more appropriate setting who makes them feel the same way.

What Happens Next To Licorice Pizza’s Real Life Characters

Paul Thomas Anderson uses fictionalized versions of many real-life people for Licorice Pizza’s 1973 characters. Gary Valentine is based on Gary Goetzman, who would go on to leave his child acting and entrepreneurial pursuits and become one of the most active film producers in Hollywood, where he is now known for his common collaborations with actor Tom Hanks. Jack Holden, who is a fictionalization of actor William Holden, would go on to star in a few more films like Network, Fedora, Damien: Omen II, and finally SOB before passing away in 1981.

Lucille Doolittle, based on actress Lucille Ball, would continue starring in Here’s Lucy for another year along with bits in TV specials, then became an assistant professor at California State University, Northridge in 1979 before passing away in 1989. Bradley Cooper’s character Jon Peters went on to produce 1976’s A Star is Born, split with Barbra Streisand, produce several Superman films, and become subject to numerous sexual assault accusations. Licorice Pizza’s Joel Wachs, played by Uncut Gems director Benny Safdie, lost his 1973 mayoral race, was on the LA City Council for 30 years, eventually came out publicly in 1999 when running for mayor, and is now president of the Andy Warhol Foundation for the Arts in New York City.

For many, the large age gap between Alana Haim’s character Alana and Cooper Hoffman’s character Gary was uncomfortable. Alana is said to be 25 in Licorice Pizza (though an off-hand comment suggests she’s actually 28), while Gary is only 15 years old, making the relationship quite illegal if it moves any further than their kiss. While morally justifying Gary and Alana’s romantic relationship gets difficult considering she’s a grown woman and he’s a minor, it doesn’t ruin the core conflicts of the Best Picture-nominated Licorice Pizza. The romance is certainly wrong, and Alana even admits to this when she finds it weird that she spends all of her time with 15-year-olds. She also initially rejects hanging out with Gary because of his age, so Licorice Pizza’s romantic side of the relationship clearly shows the amorality of Alana’s character in her growth.

Licorice Pizza also doesn’t follow a clear-cut grooming narrative like most age gap romances, with their sexual engagement typically instigated or pressured by Gary, though there’s no excuse in Alana giving in to these impulses. Paul Thomas Anderson never crosses the line of Gary and Alana actually sleeping together, which makes their relationship far more emotionally problematic than wrong in a sexual nature. As many have pointed out, the romance plays like a teenage boy’s fantasy of what it would be like for an older woman liking them back. Though, at the same time, the discourse on the problems with Licorice Pizza’s movie age gap would have been more pronounced if the genders of the lead characters were flipped.

Licorice Pizza’s coming-of-age story is very reminiscent of the 1971 black comedy Harold and Maude, which featured a 19-year-old male protagonist engaging in an emotional and sexual relationship with a 79-year-old woman, both of whom were going through existential crises for their respective generations. Gary and Alana’s age gap isn’t as taboo as Harold and Maude’s, but the fact that Gary is a minor makes Licorice Pizza’s boundary-pushing romance even more unethical. Licorice Pizza also self-evidently condemns the specific age gap of the relationship, with the difference in ages being far more about the two wanting to feel needed, more special, or insecure based on their respective ages. While the unethical age gap prevents the relationship in Paul Thomas Anderson’s film from being truly romanticized or supported, it doesn’t ruin the themes of the film and the core conflicts of the main characters. On the contrary, the immorality of Gary and Alana’s relationship seems to be necessary for their respective conflicts.

Throughout Licorice Pizza, Gary and Alana loved each other at different times, with one both literally and figuratively running after the other or the other running away. In the final scene, Alana and Gary realize they want to be with each other for the big moments, and they love their dynamic of driving each other crazy. Gary and Alana finally run to each other at the end of the 2022 Oscars nominee, and they meet in a climactic manner where they’re finally on the same wavelength at the same time. The meaning of Licorice Pizza’s ending is more about the massive changes, development, uncertainty, and instability of youth, and how special it is to finally be in the same place with someone at the right time. This is a very specific moment in Gary and Alana’s life, and while it likely won’t last, they’re happy to have found each other in this time when they can truly enjoy one another and finally be on the same wavelength. There’s an uncertainty in both of their youthful futures—not much has changed since the opening of the movie besides Alana and Gary influencing one another in their self-discoveries—but at least they have each other, right here, right now.

Licorice Pizza 2? Why A Sequel Is Unlikely

Licorice Pizza is meant to be a little snowglobe of this moment in time for Gary and Alana, with no need to move past the moment where she says she loves him. Licorice Pizza is a nostalgic look at youth, unconventional romance, and finding oneself with the help of another person who is just as misguided. The film is open-ended with no real clarity about Gary and Alana’s relationship status, but a sequel about the characters is highly unlikely, largely because their romance isn’t apt to last. Paul Thomas Anderson has also never made a real sequel before, as his films are typically specific timeframes for characters, with the story he wants to tell being fleshed out in one movie. A Licorice Pizza sequel would negate the original’s concept of a nostalgic lens for a very specific moment, so it’s much better to leave the ending ambiguous.

Jordan Williams is a Movie/TV Feature Senior Staff Writer for Screen Rant. She graduated from the University of Oregon in 2020 with a BA in Psychology and a minor in Media Studies. Jordan is based in Seattle, Washington and enjoys exploring the natural beauty the PNW has to offer. She runs on coffee and classic movies, taking pride in having watched every film on AFI’s 100 Greatest Films list and every Best Picture Oscar winner.

Why is there an AR mushroom cloud over Santa Monica Pier?