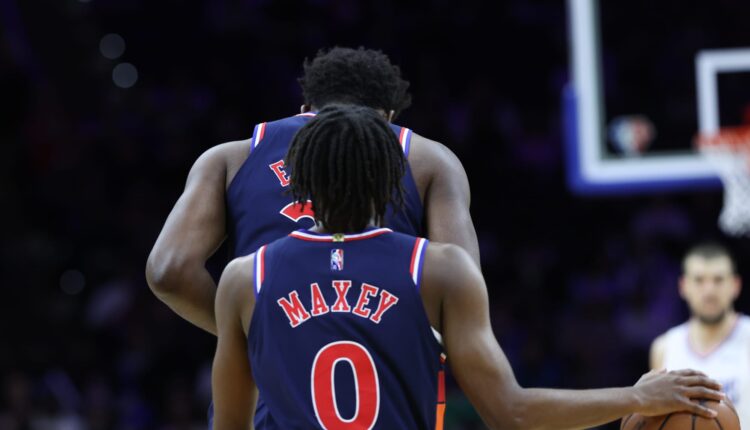 In Los Angeles, a double-double has a different meaning.

It’s a burger, a cheeseburger to be exact from a little place called In-N-Out Burger, and it can be ordered with or without a pre-griddle mustard bath if you want to take things “Animal Style.” Does Philly have burgers? Yes, the Wells Fargo Center has a pretty darn good Shake Shack, which is sort of like the In-N-Out Burger of the East Coast, and they can surely make you a burger with two patties and two pieces of cheese, but it doesn’t have that wonderful Wonder Bread bun, that special sauce – *spoiler alert* here is the recipe – and the lines that can take as long ad half an hour to get through the drive-thru.

So why, you may ask, are we talking about burgers on this, a Philadelphia sports blog? Well, because Tyrese Maxey just dropped his own double-double on the team that calls the same state as In-N-Out Burger home, the Los Angeles Lakers.

Huh, it must have been that South Philly home cooking, huh Philadelphia 76ers fans?

The Philadelphia 76ers have to be impressed with Tyrese Maxey’s development.

Tyrese Maxey can hurt an opposing team in a variety of different ways.

Oh sure, he can score points as a driver, a slasher, and on his signature floater, but he’s developed a 3 point shot that goes in 41 percent of the time on 3.5 attempts per game, an eye for picking off passes, which he does .7 times per game, and a pension for plus passes that generate 4.5 assists versus only 1.2 turnovers per game.

For those keeping track at home, that’s an assist to turnover ratio of 3.81, which is darn good for a player who has made the seventh-most passes of any player in the NBA regardless of age, experience, role, or usage rate. Maxey’s 16.6 points per game currently rank third on the team behind only Joel Embiid and Tobias Harris, and his usage rate, 20.2, ranks fifth on the team behind the aforementioned max contract players, Shake Milton, and, funny enough, Braxton Key, who is no longer on the team.

And against the Los Angeles Lakers? Well, Maxey was probably the best guard on the court, which is really saying something considering LA employs a future Hall of Fame guard who makes $41.6 million more on the season.

Now granted, that isn’t a knock on Westbrook. While his six turnovers weren’t particularly impressive, he still put up 20 points, three assists, and four rebounds in 34 minutes of action but Maxey? My goodness, he turned in 16 points on 5-14 shooting from the field and rounded out his stats with 10 assists, seven rebounds, and two blocks versus only two turnovers, which is actually high versus his usual averages. Outside of an uncharacteristically off night from the free throw line, where Maxey went 2-4, the second-year guard from Kentucky turned in a great showing on national television in front of Ernie, Shaq, Barkley, Kenny, and about 1.6 million people who turn into the NBA on TNT on an average Thursday night.

There’s no doubt about it; Tyrese Maxey has become one of the Philadelphia 76ers’ best players. His unique ability to progress his game at a rapid rate is astounding to watch and his ever-evolving bag of tricks constantly keeps opponents and even his teammates guessing. On Thursday night, Maxey recorded his first double-double, Animal Style with fried and raw onions on a Los Angeles Lakers squad attempting to reincorporate Anthony Davis, but it won’t be his last. Who knows, at this rate, number two could come as soon as Saturday, when he takes on the NBA’s only other Tyrese, Tyrese Haliburton, at “The Center.”