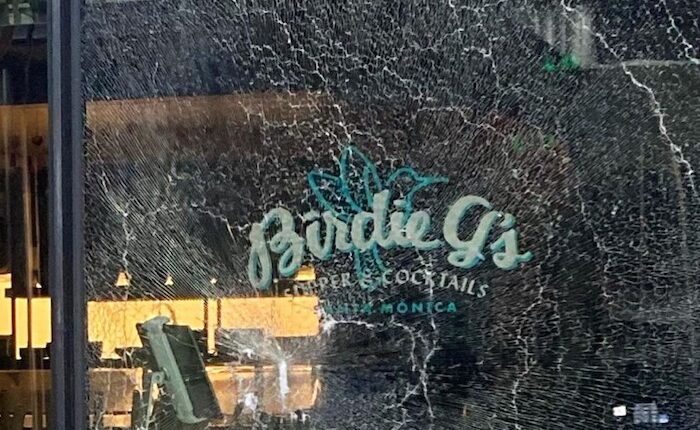 Numerous such incidents have occurred in the LA area

In the past few weeks, there have been several incidents of vandalism in Los Angeles restaurants, including restaurants in Santa Monica, the LA Times reported.

According to the Times, neither the LAPD nor SMPD spokesmen said there is a large or worsening trend of this type of property damage. Jeremy Fox, chef de cuisine and co-owner of two Santa Monica restaurants, said its facilities were destroyed and windows smashed shortly after Thanksgiving. In the Tallula’s incident, Fox said, as quoted by the LA Times, that he and his staff “know what happened to Tallulas” and that the two incidents are unrelated but have refused to add to that statement. Fox added, as quoted by the LA Times, “This is not common; Vandalism doesn’t happen very often. It’s never a good time, but right now our margins are low. We don’t best spend our time fixing something that shouldn’t be fixed. It takes the focus away from what we want to focus on, which is making people happy and being a restaurant. ”This speaks to the fact that most restaurants didn’t run their business for a higher profit before the pandemic, so they did to be hit harder by all expenses. Fox said the Birdie G window repair is likely to cost $ 1,500 due to the special tinting of the window and double pane. There are surveillance camera recordings of the vandal at Birdie G’s, it shows a masked person who throws the stone against the window on November 27th at 5:10 am. The vandal did not try to enter the store and walked away. It seemed that it was about damage, not robbery. The broken window was found by a restaurant porter around 7:00 am.

Fox noted that when he posted on Instagram about the vandalism, some of the responses indicated, in a quote from the LA Times article, that it was a “vaccine mandate punishment.” Comments like these overlook the fact that Fox, a small business owner, is not responsible for the vaccination mandate and that his company must comply with the law or risk harsh fines that would incur further expenses that could cause serious harm to their business. Police reports were filed for both incidents.

Ayara Thai Cuisine in Westchester was also the scene of a break-in and vandalism on November 23. This is a seasonal heist that happens so often, said Vanda Asapahu, who spoke to the LA Times, saying the annual heist is something she adds to her operating budget every year. A masked and disguised burglar who they suspect was a man threw a stone through the front pane of glass and then at 5:06 a.m., he smashed the rest of the window with his foot. The burglar then stole thirty dollars in coins, 100 dollars hidden in a filing cabinet and two bottles of the restaurant’s Thai iced tea. That was all the robber could find as the owners don’t keep money in the restaurant after work and most customers nowadays pay with debit or credit cards. The broken glass was discovered by someone in the neighborhood around 6:00 a.m. Vanda Asapahu, who owns and operates Ayara Thai with her family, was more concerned about the safety of her employees than the robbery itself, and said how from LA. quotes Times: “It could have been a lot worse. Nobody was hurt, nothing was really taken. It’s just part of the business. It’s sad to think about it like that, but somehow you have to move on. If you dwell on it too long, you won’t be able to bring anything back and you will lose time. ”This robbery usually happens during the holiday season, usually between Thanksgiving and Christmas. Vanda Asapahu called the LAPD’s non-emergency number to report the incident but was unable to reach anyone after reviewing the security camera damage and footage.

Nurses in Crisis Over Covid Dig In for Better Work Conditions