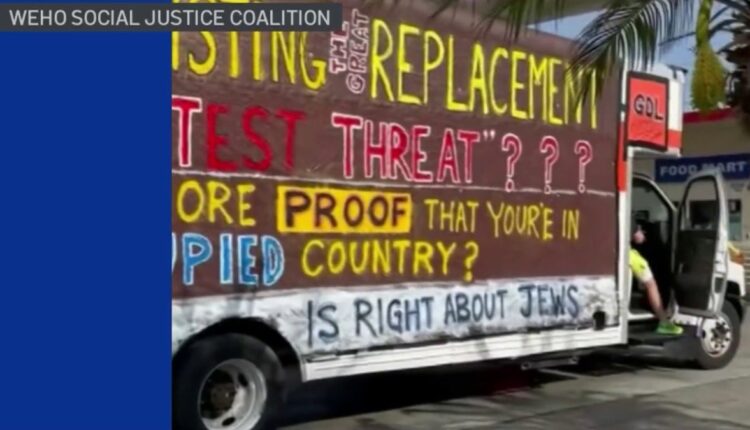 A truck covered in anti-Semitic messages is being investigated by authorities as a hate incident, after driving through West Hollywood and Beverly Hills over the weekend.

The watch commander for the Los Angeles County Sheriff’s Department confirmed that they are investigating the hate incident involving at least two men and the truck.

Authorities have the license plate for the truck, and they are looking into who rented the vehicle.

The truck was first reported at a gas station at Carson Street and Santa Monica Boulevard on Saturday.

The vehicle, a rented box truck, was covered in racist and antisemitic slogans such as “Jewish Lives Matter Most” and “Resisting the Great Replacement = Greatest Threat??”

Replacement theory is the same white supremacist conspiracy theory that authorities are investigating as a motivation for the 18-year-old mass shooter in Buffalo, New York who killed 10 people on May 14.

Video shared by the WeHo Social Justice Coalition showed several people angrily confronting two men holding cell phones outside the truck, while the truck was parked at the gas station. The two men appeared to be filming the angry reactions from the crowd.

“Why don’t you get the f— out of here, it’s not your neighborhood,” one person can be heard saying to the men with the cell phones.

“You’re a racist!” another man can be heard shouting.

The angry crowd told the two men to leave, but according to the WeHo Social Justice Coalition, there were also other supporters and corroborators there defending the two men and free speech.

The incident in West Hollywood wasn’t the only one reported in the area over the weekend. The Beverly Hills Police Department confirmed that a box truck covered with anti-Semitic messages also parked in front of the lobby at the Beverly Hills Hilton around 4 pm on Sunday.

Those driving the truck on Sunday were seen using blowhorns and megaphones, causing a disturbance.

Deputies were called, and they did take a report. No arrests were made.

The investigation into the truck and who rented it continues.

SoCal has seen several other instances of antisemitism in recent months.

West Hollywood city officials reiterated that the city has no place for hate.

“The City of West Hollywood has a core value of respect and support for all people and there is no tolerance for hate, intolerance, or discrimination,” the WeHo statement read in part.

Beverly Hills police also put out a statement, saying in part “The City of Beverly Hills and BHPD strongly condemns antisemitism in all its forms.”