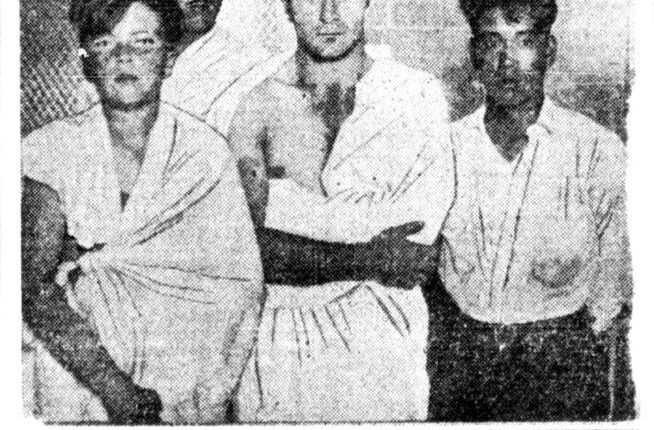 The Topanga Bubbles are a popular fishing spot about a mile from the beach where natural gas rises from the ocean floor. Why it attracts fish is a mystery, but one guess is that they like the rocky terrain around the vent.

This location is related to the worst boating accident in Santa Monica Bay, in which on Memorial Day, May 30, 1930, the overcrowded fishing boat Ameco capsized and 16 people drowned.

The trouble started when the 45-foot Ameco left Santa Monica Pier for its second daily voyage to the Topanga Bubbles with an estimated 70 people on board. Half as many would have been overcrowded.

A fisherman who refused to board warned the ticket seller, according to the LA Times on June 3, 1930.

“I told her she was overloading the boat … and she replied that you had to do this on Sundays and public holidays, since these are the only days of the week that others don’t mind,” the man recalled Newspaper .

A wind came up at the Topanga Bubbles and the sea became rougher.

The inexperienced captain Bill Lightfoot (25) lifted the anchor at 4 p.m. for the return trip and turned the boat parallel to the bank. A wave hit the side, splattering the passengers. As everyone ran over to the other side, another wave unbalanced the boat and overturned it.

“The interplay between happiness and deepest tragedy was drawn so briefly that no one could even reach for a life jacket before it was hurled into the lashing waves,” reported the Evening Outlook newspaper on May 31, 1930.

Gasoline and oil gushed from the Ameco, choking the swimmers as they battled the waves. People tried to hold on to the slimy bottom of the boat before it sank. Death seemed to choose its victims to show different ways of suffering.

Barbara Jones, 16, lost her grandfather while trying to save Robert Buchen, 17. She held the unconscious teenager up for 20 minutes, then found that he had died from a head wound.

There were also scary survival stories.

A photo of survivors from 1930

Robert’s friends – Earl Smith, 17, and Howard Martin, 16 – helped others afloat and were the last to be saved.

Paul Fowler cut off his heavy shoes with a penknife and then stabbed a barrel for extra grip where seven others were already holding on.

A man swam to a fishing boat half a mile away. Another made it to shore.

The loss of life would have been much greater had it not been for two other fishing boats, the Freedom and the Palisades. The passengers on the Freedom threatened mutiny if more people were brought on board, but the deckhand George King reportedly yelled, “I’ll beat the first man to walk into this wheelhouse!” when Captain Joe Fudge steered coolly through the floats so that they would not coat his boat.

A lucky coincidence also saved lives. Santa Monica Canyon pharmacist Burton “Doc” Law, scanning the ocean with binoculars, happened to see the Ameco turn around. He reported it immediately and sent lifeguards to the scene. During their rescue work, they placed a marker where the Ameco sank, but the waves washed away the marker and the wreck was never found.

Only three bodies were recovered that day and with no record of passengers being kept, no one knew how many were still missing. The radio news brought thousands to the beach for answers. Motorists turned their headlights into the surf to help the rescuers. Police searched cars that had been left in the parking lot.

“Every now and then a tired man shuffled into the parking lot and fished a crumpled and brine-soaked ‘ticket’ from a damp pocket,” reports a contemporary report published in the LA Times. “[He’d] take his car, try graciously to answer the overseer’s eager question: ‘How did it happen?’ – and drive home into the night. “

The Ameco was part of a small fleet of boats owned by the Morris Pleasure Fishing Company. The Morris family, descended from generations of Nova Scotia sailors, were particularly callous to the tragedy.

Less than two weeks after the tragedy, Captain Duncan Morris wrote a letter to the editor of the Evening Outlook defying the outcry for new laws:. [or] stacking additional equipment on such boats … [Only to] assure … ‘elbow room on the rail’. ”

The Morris Company invited people to replenish their fishing trips while naval boats, Japanese fishing boats, airplanes, and the Goodyear airship were still searching for bodies.

“Captain. CA Morris brings the news that the pier and barges are continuing the run started last week and that the recent disaster has not stopped the many ‘Izaak Walton’ fans from filling all the available space, ”Outlook reported on Nov. June 1930.

However, these fishing trips accidentally joined the search by spotting some of the victims. The first body to reappear was Barbara’s grandfather Ward S. Ferguson, who was found near the Topanga Bubbles on June 13.

The last of the 16 bodies and those who chased the Japanese fishing boats were found on June 23 and 24 and belonged to Shizuo “Sam” Suyemori and Kiyoki “Joe” Kamimura. A rumor that made these foreigners exotic claimed they had thousands of dollars in pay slips with them. This was denied by their friends and family, 11 of whom had fished with them, and no such treasure was found in the victims’ wallets.

The Ameco was not the first boat that the Morris Company lost to the Topanga Bubbles. The 62 foot long Kisanto, one of the largest boats in Santa Monica, sank there after its engine caught fire on May 10, 1926. No people were killed.

It wasn’t their first boat called Ameco, either. The original Ameco, 60 feet long, dragged its anchor in a storm on February 13, 1926 and shattered itself on Santa Monica Pier.

A number of mishaps that year included the deaths of Captain Thornton Morris and two staff members who drowned while attempting to rescue another boat that was unleashed in a storm on April 8, 1926.

The Ameco disaster led to new shipping regulations on seaworthiness and passenger limits. It also brought up other issues, such as the Santa Monicans were bad swimmers and none of the schools had a swimming pool. Some argued that recreational craft shouldn’t even be allowed in Santa Monica Bay, since it was really just a “bay,” a shallow indentation in the coast.

“The word bay deceives many, both on land and at sea. It conveys the idea of ​​protection from storms and thundering water waves. There is no such protection here, ”wrote Outlook.

In 1935 the Topanga Bubbles received its own fishing boat, the 350-foot ship Star of Scotland. This ship had also suffered an overload accident. Earlier this year, a stage built for fishermen collapsed outside Santa Monica and a man drowned after people came running to see a boy’s big catch. Captain Charles Arnold was found innocent because the platform was up to date and had been inspected days earlier by an insurance company.

In 1938, the Star of Scotland was sold to gangster Tony Cornero, who converted it into Santa Monica’s most infamous gambling ship, the Rex. The ship was repurposed for World War II and torpedoed by a German submarine near South Africa.

The famous Star of Scotland shipwreck off Santa Monica Pier is a later ship that Captain Arnold ran as a restaurant until it sank in a storm in 1942. In 1946 he and his wife moved to Topanga and took over the Schuler’s Grill restaurant, which is now the Topanga Living Café.

One final event at the Topanga Bubbles is noteworthy: an explosion that was heard there shortly after dark on November 25, 1936, followed by a heavy sea. No debris was found, so it probably wasn’t a boat, and no light was seen to support the theory that a meteor had crashed. A nearby seaman believed the explosion came from underwater and was caused by the bubbling gas.

Pablo Capra is the archivist for the Topanga Historical Society and author of Topanga Beach: A History (2020). More at topangahistoricalsociety.org.