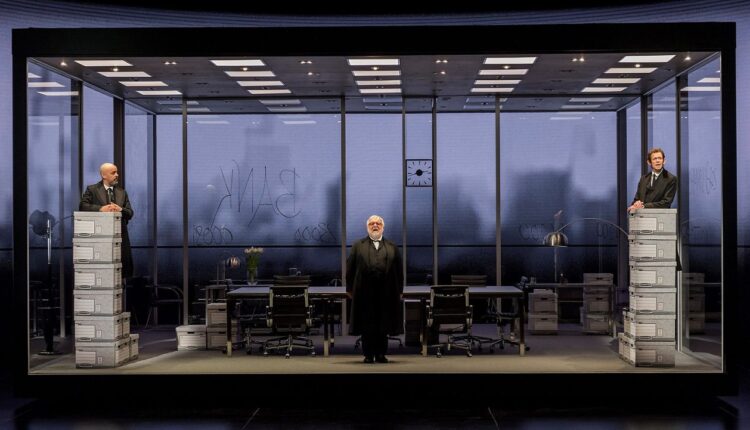 But for the three actors on stage, the time flies.

“For me, each act feels like 10 minutes,” Adam Godley said. “There’s not a second where we can lose mental or physical concentration.”

The show is about the Lehman Brothers — not just the company, but the men themselves. It begins with their arrival in America 163 years before the financial institution that would ultimately bear their name famously collapsed.

It’s been a marathon, and Godley needs to stay fueled.

“This is the first show I’ve ever done where I had to eat during the show to keep my energy up,” he admitted. His go to was a peanut butter split smoothie.

“For me it’s about just brain power,” he said, “and I’m also a fan of taking a big nap before the show.”

A unique piece of theater, “The Lehman Trilogy” was first written in Italian by Stefano Massini and then adapted into English by Ben Power. Godley and Simon Russell Beale have been involved since the play debuted in London at the National Theatre.

“It is a long, extended poem,” Beale explained of the format. “When we first got the script it was not divided into people who spoke particular words, was it? I think we divided it up.”

It’s Beale who starts the show, on stage, alone, for about 20 minutes, addressing to the audience. As each subsequent brother arrives in America and onto the stage, that style of delivery and prose continues, broken up by short exchanges of dialogue.

Godley said it takes a few minutes for the audience to find their footing, but he can always feel when they get on board.

“It’s a beautiful and magical thing to hear them going ‘Oh, that’s what this is. That’s how this works,’” Godley said. “And that, for me, is one of the most special things every night to feel that happen.”

Overshown, the third actor, joined the show as a member of the Broadway company, making him the new kid on the block, although his resume spans more the three decades. In fact, between them, the trio represents roughly 100 years of stage experience. The material is in three sets of very capable hands.

Throughout the evening, the actors slip between characters, fully embodying each, no matter how fleeting. One of Beale’s favorites is an Irish maid who has one line, but he is delightedly devoted to her, infusing her with a complete backstory.

“It’s the sheer sort of hutzpah of going, ‘I know I’m a middle-aged man, bearded, English but I am for that one sentence an Irish maid of 30 who’s excited by a new suitor for her mistress,'” Beale explained. “And I believe it and I want you to believe it in the audience.”

“And they do,” Godley confirmed.

Directed by Sam Mendes, the play also has some cinematic elements. A video backdrop sets the scene on the wall behind them. Live piano music underscores the entire show, like an old school silent film, the actors said.

And there’s the set — a transparent, rotating box designed by Es Devlin, who also designed the set for this year’s LA-centric Super Bowl halftime show. The actors slide seamlessly through open doorways as the box rotates, writing on the walls with dry erase markers. The design hasn’t changed from location to location, but Godley said there’s something perfect about it in this space — the fifth they’ve played.

“The show fits absolutely beautifully here, and it really fits that style, this kind of epic presentation,” he said.

What the play doesn’t really cover is the actual 2008 collapse, but no doubt many in the audience remember that story, or were affected by it. In fact, Overshown said, we all played a role.

“Everyone sitting in this audience is part of this play,” he explained. “You know, you’re involved if you have a credit card. Yeah, or a mortgage. You’re involved. And it takes two.”

“I spend money that I don’t have on things that I don’t need,” he continued, echoing a line from the play. “I think we all do at some point.

“Human beings are human beings and they’ll always be human beings with the same weaknesses and strength,” Beale said. “Things like the crash of 2008, which we avoid talking about, we sort of do it through the crash of the 1920s. So there’s a lot of asking the audience to say, ‘Oh, I see human beings. The world has been here before.’”

Calling it a study of good and evil, a play, a poem or a cautionary tale, Godley is just thrilled to be back in the rotating box-filled room, waiting each night to feel the audience jump on board for the journey.

“For me, it’s that,” he said in almost a whisper. “It’s just the beauty and the magic of live theater.”

A commodity he wouldn’t trade for anything.

”The Lehman Trilogy” runs through April 10 at the Ahmanson Theatre.