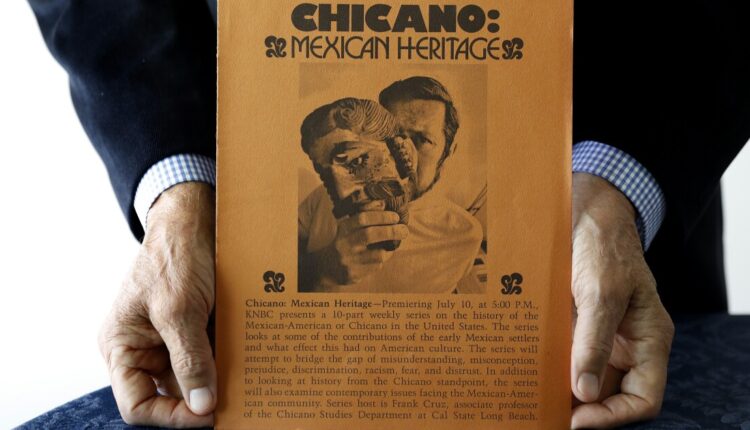 From time to time Frank Cruz would walk into his spacious garage in Laguna Niguel and look at the boxes full of old and unused items: tax returns, clothes and papers from his days as a Chicano college professor, TV news reporter and presenter, co-founder of the Spanish-speaking network Telemundo and a groundbreaking one Latin American-owned insurance company. Not to mention notes from the many boards he’s served on, including the Corporation for Public Broadcasting.

But there was a special big blue box – between one with the milk teeth of his now grown-up children and one with a daughter’s wedding dress – that always gnawed at him. The label read: “Chicano Series”.

It contained nine 16-millimeter rolls of film from “Chicano I & II: The Mexican American Heritage Series,” the television show that first aired on KNBC-TV in Los Angeles in July 1971. The series, hosted by Cruz when he was in his early 30s, also starred on sister stations in Chicago, New York, Cleveland and Washington, DC

For 50 years the roles remained largely untouched in his garage.

On a day in August Cruz, now 82, thought like a dozen times before: “Pendejo, you’d better do something about these films. It might be too late. “

And he did. His contacts led him to a film archivist at USC, who digitized the film and created a website for them. For the first time since it aired and reissued in the early 1970s, nine out of 20 episodes in the Chicano series are now publicly available on the USC Hugh M. Hefner Moving Image Archive website. (There is no film from the “Chicano II” section of the series, and episode 6, entitled “The War Years,” was missing from Cruz’s first volumes.)

“I was ready to hear that [Dino Everett, the archivist] couldn’t because the film was too brittle, they were broken and not good, because the images are fading, ”says Cruz. But a few weeks later, “after 10 candles and a prayer to Santo Niño de Atocha, he called me and said, ‘Frank, I was able to transfer them.'”

Cruz was delighted. “We keep history” USC archivist Dino Everett retrieves a picture of the scrolls saved from “Chicano I & II: The Mexican American Heritage Series”.

You have challenged limits

The 1968 East LA strikes, followed by the murders of Robert F. Kennedy and Martin Luther King Jr., both loved by much of the Latino community, took months apart. Then came the 1970 Chicano moratorium and the assassination of Ruben Salazar, a respected Los Angeles Times reporter.

Out of this period of social and political activism, and enough of the stereotypical portrayals of Latinos in the media, Sal Castro elected a major leader of the historic strikes and Julian Nava, the first Mexican American to join the Los Angeles Department of Education, joined pitched to KNBC-TV in Los Angeles to create a show that explored the problems of the Mexican-American community and examined history and culture from a Chicano perspective.

The broadcaster agreed to the broadcast of the program. Cruz, a former Lincoln High School teacher and colleague of Castro who was teaching history at Cal State Long Beach at the time, agreed to host the series after Castro declined. Cruz’s “yes” would change his professional life – after the 1971 series was repeated in 1972, the news director of KABC-TV called Cruz and offered him a job as a reporter for the LA Latino community.

The “Chicano I & II” episodes were compiled by professors, historians, and experts – many of whom were founders of Chicano study departments at their universities, including UCLA, Stanford, San Jose State, and San Fernando Valley State College (now Cal State Northridge). Topics they examined included the history of migrant workers and Chicano labor activities, economic repression and educational inequality, and the many cultural and other contributions their Mexican ancestors made to the western world,

“‘Stereotyping in the Mass Media’, I mean, it could make a headline today!” Natalia Molina, Professor of American Studies and Ethnicity at USC, says of one of the episode titles.

The show, she says, tried to show that “Mexicans are not docile, that they are human. They are like you and me You live in three dimensions. They have families. You create. They were just trying to bring humanity to what we think of when we think of the Latinx people. And we still struggle with that today.

“Nobody had done anything like that,” she adds. “The series was up to date then and I think unfortunately it’s up to date today.”

Many of the show’s guests and interviewees cited the topics and subjects covered and were among the first in their field, such as Nava or Ricardo “Richard” Romo, a writer and city historian who laid the foundations for Molina, a 2020 MacArthur Fellow attributes for their research. “These are the people who did this original work for us,” she says, “and who challenged all possible limits.”

Romo, the city historian, remembers the educational issues raised in the exhibition.

“Many of us have experienced some of the things that frustrated these students,” says the Texas-born and raised scientist. “The libraries had no books on our history. The teachers came from the suburbs and did not understand many things that were happening in our churches. … [They] told us, ‘You can’t speak Spanish in the classroom or in the schoolyard.’

“The worst part is that there were a lot of good teachers, but many of them didn’t think enough of the students to encourage them to go to college,” says Romo. Only two of his senior classes out of 400 went to four-year college. He was one of them.

As groundbreaking as the series was, viewership numbers from that era are not easy to find. But based on the 6 a.m. airtime, the numbers were likely low. It was “not a popular hour,” Romo recalls. It was frustrating.

“It was like, ‘We want to do this, but we can’t give you prime prime time where we have the most advertisers,” says Romo, stopping himself from being overly critical because the green light was given at the end of the day to produce “one of the first shows of its kind in the whole country”. He just wishes that today’s technology and social media existed then to expand the audience. The scripts of the second volume of “Chicano I & II” are housed at the USC.

The archivist behind digitization

Dino Everett is a self-proclaimed optimist.

As a longtime archivist at USC Hugh M. Hefner Moving Image Archive, he has learned over the years “that one way or another, even when something comes to me in a terrible state, I can usually get something out of it.”

Fortunately, Cruz had the rolls of film stored in the best possible way, albeit by mistake: in boxes that act as insulators versus exposed metal cans.

Homes, Everett explains, are typically not air-conditioned, so films kept in metal cans are prone to temperature fluctuations. “The switch, the back and forth between hot and cold,” he says, “really damages the film.” “Either way, even if something comes to me in a catastrophic state, I can usually make something out of it”: Archivist Dino Everett in a temperature-controlled warehouse at USC.

In his hands, Everett took the films from their metal reels, ran them through a cleaning machine, then through a film scanner called Kinetta, before pushing them through a restoration software program to remove minor imperfections such as dust and flicker. After two weeks and more than 60 hours, all nine episodes were digitized.

“[Frank] was thrilled that I could scan it, ”he says. “I wish I could say it was my expertise, but they were in really great shape.”

The show, Everett notes, was done in the picture tube – the process of recording a live television broadcast on film by pointing a camera at a screen or video monitor while the footage was playing; In this way, broadcasters preserve and reproduce their live programming and broadcast them to affiliated companies.

The procedure was replaced with the advent of videotapes in the 1950s, so by the early 1970s it was rare for television broadcasters to still use it. But videotapes were expensive back then. “It was actually cheaper to make black and white picture tubes than full color videotape,” says Everett.

On a recent September afternoon, Cruz struggled over the phone to answer the question: Why didn’t you digitize the film sooner?