The Biggest Moments From the 2022 Critics Choice Awards 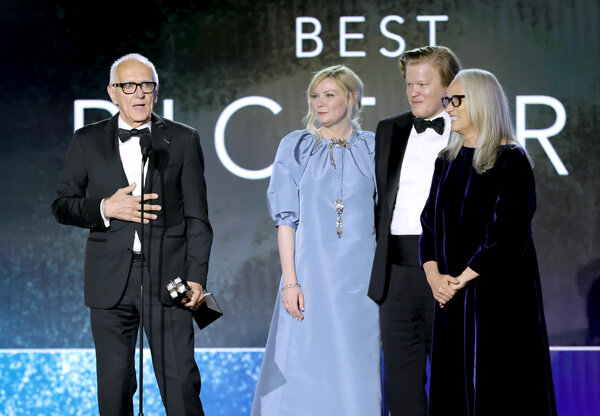 March 13, 2022, 8:39 pm ETBefore presenting an award, the “Borat” actress Maria Bakalova spoke of Ukraine, saying, “Our hearts are with you.” Credit…Amy Sussman/Getty Images

Most of the Critics Choice ceremony has been focused on prizes, but the war in Ukraine has been addressed in a few ways.

Most notably, the Oscar-nominated actress Maria Bakalova, known for her breakout role as Tutar Sagdiyev in “Borat Subsequent Moviefilm,” took time on Sunday night — before announcing the best supporting actor award — to recognize the people of Ukraine.

“I’m from Bulgaria, and my home city’s just a few hundred miles away from Ukraine,” Bakalova said. “So as we gather together on this special night, I want to take a moment to acknowledge the bravery of the people of Ukraine who are defending their right to independence and democracy.

“I truly hope that we will come together and usher in a new era of cultural and artistic exchange between Eastern Europe and Hollywood, which has been a foundational force of creativity in the 20th century,” she continued. “So I hope my message goes to the Ukrainian people: We see you. We stand with you. And our hearts are with you.”

Bakalova is from Burgas, the fourth-largest city in Bulgaria, which sits less than 750 miles from Kyiv, the capital of Ukraine. Earlier on Sunday, Russia launched airstrikes against a military base in western Ukraine, bringing the war 11 miles from the border with Poland.

Billy Crystal, the recipient of a lifetime achievement award, also brought up his roots in the region, explaining that his grandmothers were from Odessa and Kyiv and fled to the United States to escape pogroms. When he was growing up in Long Island, “their laughter — the first laughs I ever got in my life — is the fuel that my engine is still burning today,” he said, and added, “I pray that somehow, some way, there can be laughter and joy in that part of the world once again.”

The “Ted Lasso” star Hannah Waddingham, accepting best comedy series on behalf of the cast, spoke of “the babies in the Ukraine that are being utterly decimated at the moment from this putrid, putrid torrent of abuse. Please, think of them as much as you can, and give as much as you can.”

Before presenting the biggest award of the night, best picture, the Los Angeles Rams head coach Sean McVay handed the mic to his fiancée, a realtor, Veronika Khomyn, who is from Ukraine. “I proudly stand with my fellow Ukrainians and I admire their strength,” she told the crowd. “They have faced unimaginable adversity with such profound grace and bravery. Their fight and the way they have united the world is truly inspiring. There is no place in our world for this kind of violence, and our prayers go out to all the lives that have been lost.”

There were also a handful of performers — including Jeremy Strong of “Succession” and the “White Lotus” actor Murray Bartlett — bearing blue-and-yellow pins, mirroring the national colors of Ukraine.