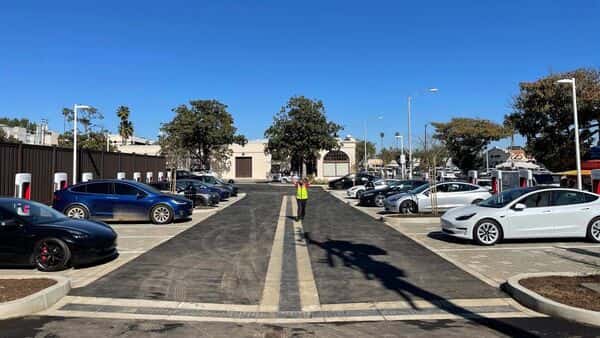 Tesla CEO Elon Musk on Saturday announced on Twitter that the company’s supercharging station will accept cryptocurrency Dogecoin as payment.

“Of course, you can pay in Ðoge (sic),” Musk said in response to a tweet by Ryan Zohoury, the founder of Tesla Console, who informed that the new Santa Monica Superchargers were almost full minutes after opening.

This comes days after Musk announced that Tesla Inc merchandise, such as the “Cyberwhistle” and “Cyberquad for Kids”, can be bought using Dogecoin.

Musk had tweeted in December saying Tesla will accept Dogecoin as payment for merchandise on a test basis.

The Tesla CEO, a frequent booster of Dogecoin on social media, had hinted at the move for some time. In addition, numerous reports in recent days had indicated that source code on Tesla’s website included an option for Dogecoin payments.

In a recent interview, he had also endorsed Dogecoin over any other crypto coin.

“The transaction value of Bitcoin is low and the cost per transaction is high. At least at a space level, it is suitable as a store of value. But fundamentally, Bitcoin is not a good substitute for transactional currency,” he said, adding that even though Dogecoin was created as a silly joke, it is better suited for transactions.

Musk has been an early corporate champion of adopting digital currencies and has helped spur the popularity of Dogecoin.

Meanwhile, Musk had said last year that since Bitcoin mining is “shifting towards renewable energy”, his company will likely resume accepting the cryptocurrency as payment for its electric cars.

Hydropower, geothermal and nuclear are all good energy sources for Bitcoin mining, Musk said, adding that once he confirms mining uses 50% or more renewable energy, Tesla will start accepting the cryptocurrency again.

Tesla suspended purchases using Bitcoin in May 2021 on concerns about fossil fuel used in mining, triggering a slide in the digital currency.

He had said in a tweet Thursday he worries about “massive use” of coal and other carbon-intensive energy to generate the electricity needed to mine digital currency.

In February last year, Tesla said it had purchased $1.5 billion in Bitcoin and planned to accept it as a payment, triggering a rally in its own stock as well as the currency.

* Thank you for subscribing to our newsletter.