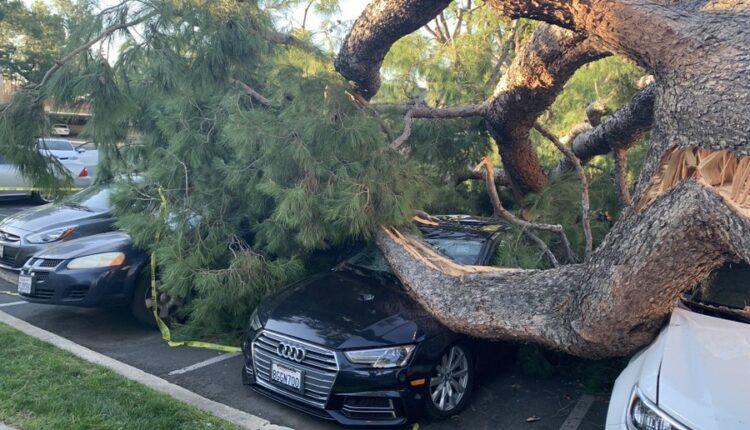 Fierce winds continued to rage in parts of Southern California Saturday morning after knocking down large trees on cars and homes overnight.

A large tree fell into an apartment building in Ontario, destroying some apartments.

Winds that started Friday afternoon left a trail of downed trees in the San Gabriel Valley in places like Arcadia, Sierra Madre, Pasadena and Altadena.

Ellen Kutza, an Arcadia resident, told an RMG News videographer that the power was already out at her home on Canyon Crest Drive when she heard a loud noise outside.

“We weren’t sure what the heck was going on, and we opened the front door to a big, huge tree in our front yard,” she said.

The tree belonged to her neighbor, she said, and had fallen through a brick wall separating the houses and crashed onto a car and truck in Kutza’s driveway.

A man climbs out of a smashed home after hearing from the homeowner after a large tree downed by high winds destroyed the Ontario residence Friday night. (Photo by Will Lester, SCNG)

In the Inland Empire, two large trees damaged a house in the Euclid Avenue and G Street area. Another tree landed on four cars in the Stoneridge apartment complex.

A high wind warning went into effect Friday at 3 p.m. in the Santa Monica Mountains, the Santa Clarita and San Fernando Valleys and the Los Angeles County Mountains – and the warning was expected to remain in effect through 3 p.m. Saturday.

According to the National Weather Service, the LA County Mountains could experience winds of 35 mph to 45 mph with gusts of 70 mph and isolated gusts potentially reaching 80 mph in the western portion of the San Gabriel Mountains.

A few trees were blown down on a house on the corner of Euclid and G St in #Upland by strong #santaanawinds overnight. pic.twitter.com/p7ib5yhodS

Other areas covered by the warning could see winds of 25 to 35mph with gusts of up to 65mph – strongest in the Santa Monica Mountains and the western and northern portions of the San Fernando Valley.

The NWS issued a strong wind warning for inland areas, which runs until 6 p.m. on Saturday.

“Winds will be strongest on the coastal mountain slopes of the San Bernardino Mountains, where gusts in excess of 70 miles per hour are expected. Expect widespread gusts of 40 to 60 mph for the Inland Empire and inland Orange County,” the NWS said.

The winds left a trail of downed trees in the San Gabriel Valley in areas including Arcadia, Sierra Madre, Pasadena and Altadena, according to RMG News.

Lighter wind warnings are in effect for the coastal area of ​​Los Angeles, including downtown, and the San Gabriel Valley through 3 p.m. Saturday. Forecasters are expecting winds of 20 to 30 miles per hour with gusts of 50 miles per hour in the coastal area, particularly near Malibu. The San Gabriel Valley could be hit with winds of 15 to 25 mph and gusts up to 40 mph.

Forecasters said the winds could be “strong and potentially damaging”.

“Daytime temperatures will warm above seasonal normals for this time of year as offshore currents remain in place throughout the period, but in wind-sheltered areas and the inner valleys, overnight low temperatures could become quite cold,” the NWS said.

The notices included warnings that the strong winds can blow around unsecured objects and make driving difficult, especially for high-profile vehicles. Areas of caution reported by the Weather Service include the Golden State (5) and Antelope Valley (14) highways.

In addition, branches could be blown over and there could be some power outages, the weather service said.

This is an evolving story. Please check back for more.

One Dead in Crash on Santa Monica Freeway Ramp