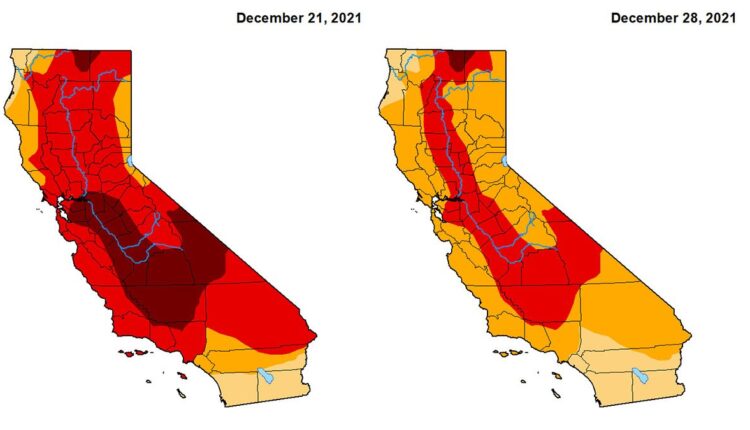 A series of early winter storms that brought rain and snow to California for days helped improve conditions in the drought-stricken state.

There’s been some drought across California this week, but conditions have improved significantly in the two most severe categories.

Three months ago it was 88 percent.

The US Drought Monitor map for the last week of 2021.

The storms, fueled by a band of moisture over the Pacific, kicked off Christmas week and continued that week with rain and snow in the mountains. The report was updated at the beginning of December 28th, so it does not include all of this week’s rainfall.

“A persistent pattern across the North Pacific and western North America kept the frequent west coast storms going through late December,” the Drought Monitor said. “The seven-day rainfall from December 21-27 exceeded 2 inches, liquid equivalent, in much of California and western Oregon and Washington. 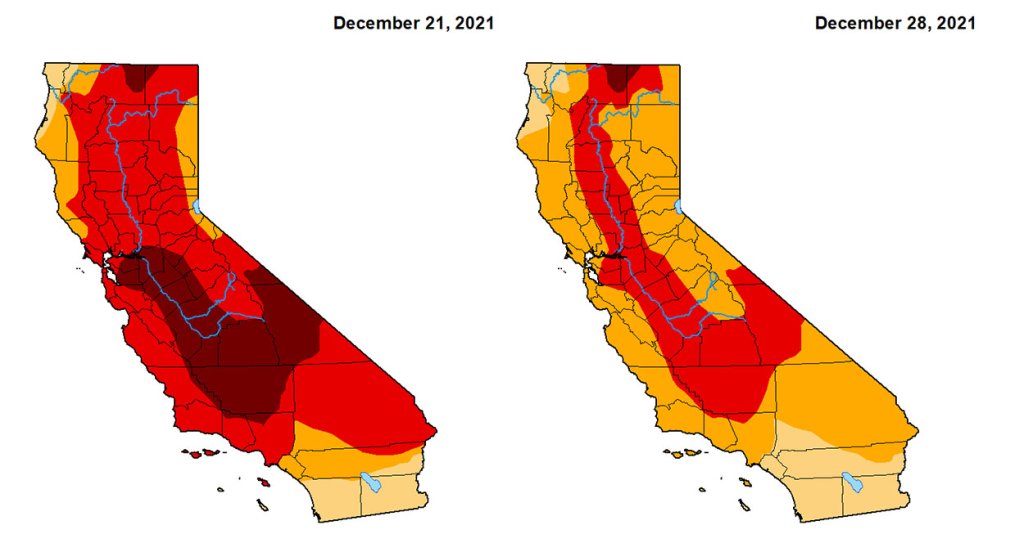 These maps show drought conditions according to reports from the US Drought Monitor released on December 30 (right) and the previous week.

For the past two weeks, rainfall has averaged 150 to 300 percent of normal or more across almost all of California, the report said.

“That mid-to-late December wet pattern was also accompanied by sub-normal temperatures (-2 to -6 degrees F) across California and the Pacific Northwest.”

The Central Sierra Snow Laboratory observed 193.7 inches of snowfall that month, setting a December record, beating the previous record of 179 inches set in 1970.

California’s mountain snow holds 160% of the water it normally has this time of year, state water authorities announced Thursday.

“Given the favorable snowpack and heavy rainfall in December, further improvements may be warranted for California in the weeks ahead,” the Drought Monitor said.

Droughts are widespread in California, where dry spells are often followed by wet winters that replenish the state’s critical snow cover and water reservoirs. And it takes more than a lot of rain and snow in one fell swoop to alleviate drought.

The state is “definitely not quite out of the woods yet,” said Sean de Guzman, manager of snow surveys and water supply forecasts at the California Department of Water Resources.

Persistent hot and dry conditions over moths and years mean that water from reservoirs and the snow cover of the Sierra Nevada that feeds them evaporates faster. The snowpack usually melts in spring or early summer, when the water flows into the state’s vast storage and distribution system.

About a third of California’s water supply comes from snow, which melts and drains from the Sierra Nevada and Shasta Trinity Mountains of Northern California.

California has more than 500 reservoirs that were 50% lower than they should be in early June. These photos show the dramatic effects of the current dry spell on California’s lakes and reservoirs.

California’s Mediterranean climate means summers are always dry and winters are not always wet. The state’s reservoirs act as a savings account, storing water in the wet years to help the state survive in the dry years.

Last year was the third driest since rainfall began.

Drought is generally defined as a period drier than normal that creates water-related problems. This period can be days, weeks, months and years.

Droughts were divided into the following categories: