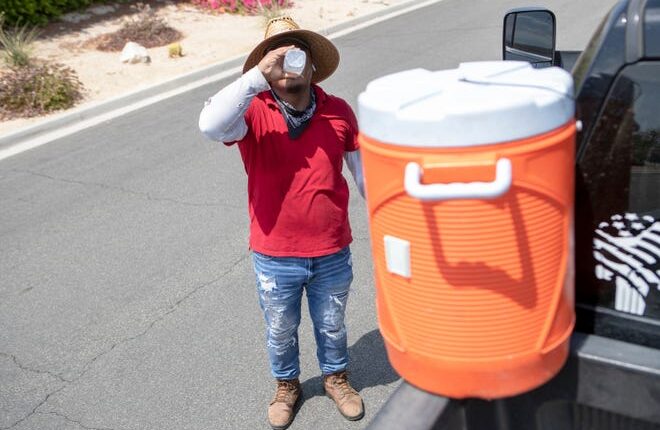 With summer in full swing and daily temperatures peaking well over 100 degrees in the Coachella Valley, a local lawmaker is hoping to pass a few proposals this year to address extreme heat conditions in California, including one that would mark first-of-its-kind climate legislation in the US

The push for the bills comes as climate change has caused an increase in extreme heat conditions in recent decades. Such weather can have deadly consequences for residents, particularly those who work in the conditions: In the United States, extreme heat contributed to the deaths of roughly 12,000 people annually from 2010 to 2020, according to a University of Washington study.

Longtime Assemblymember Eduardo Garcia, D-Coachella, is a lead sponsor of the bills, which have cleared the state Assembly and are under consideration in the state Senate.

Under one proposal, Assembly Bill 2238, California would become the country’s first state to set up a statewide warning system for extremely hot weather. The system would rank extreme heat events by factoring in the projected health impacts associated with the conditions, along with maximum and minimum temperatures and the estimated duration of the heat wave.

The bill also would require state officials to work with local governments, tribal and labor groups, and community organizations from vulnerable communities to develop a public communication plan for the warning system, “with a focus on strategies that target communications to populations that are most at risk of public health and emergency impacts from extreme heat events.”

The legislation, which was developed during a trip that Garcia and several other lawmakers took to United Nations climate discussions in Scotland last year, has a long list of supporters, and it sailed through the Assembly without opposition in May, putting it on a solid track to gain final approval.

The legislation has also been touted by bill sponsor and Insurance Commissioner Ricardo Lara, who described heat waves as “the deadliest climate threat that California is facing today.”

“With more heat waves forecast in the years ahead, it is essential to public health and safety that we help Californians prepare, especially our most vulnerable,” Lara said in a statement. “Giving advance warning and ranking these heat waves help us confront the growing threat of extreme heat with actions that people and communities can take to stay safe and healthy.”

Garcia, who chairs the Assembly Committee on Utilities and Energy, said addressing extreme heat conditions is “top of the agenda” for many state lawmakers, particularly those from areas such as the San Fernando Valley and the Coachella Valley, where temperatures peaked at 123 degrees last summer.

“This extreme heat conversation is not going to go away, of course, just with this series of bills,” Garcia told The Desert Sun. “It’s going to require us to focus in and really emphasize our work standards.”

The bill also would require the state Department of Insurance to study “insurance gaps,” in which uninsured residents of a community are more likely to feel the impacts of extreme heat. A 2021 report from the state’s Climate Insurance Working Group found the impacts of extreme heat “largely lack any insurance coverage at all, leaving people vulnerable to such disruptions.”

“Amidst accelerating climate risks, California needs to build capacity for strong and equitable recoveries, by focusing on low-income communities and communities of color, which experience higher rates of heat-related exposure and deaths and greater damages from flooding,” the report states . “If only some communities in California recover fully from climate impacts, the entire state will struggle moving forward.”

A second proposal co-sponsored by Garcia, Assembly Bill 2243, works in tandem with the other bill, outlining an “ultrahigh heat standard” for people working outdoors in temperatures that exceed 105 degrees. In such conditions, employers would be required to have mandatory, paid rest periods every hour, immediately available cool water, and increased monitoring of workers for heat-related illnesses.

Garcia pointed to an increase in emergency room visits for heat-related illnesses as a prime motivation for the legislation. The bill’s analysis notes a study in the American Journal of Industrial Medicine found that agriculture workers are 35 times more at risk for heat-related death than those in other industries.

“We firsthand have seen how hard it is for our areas, particularly our poorer areas, where families didn’t have the luxury of working via Zoom indoors,” Garcia said. “They had to continue feeding the country and our state, in some cases in very extreme hot weather.”

Unlike the ranking system bill, AB 2243 has drawn pushback from powerful lobbying groups, including the Agricultural Council of California and the California Builders Alliance. In a letter, a coalition of the bill’s opponents argues the new work standards are “very similar” to existing regulations, stating the changes “would be perfectly appropriate to raise via the normal regulatory process.”

“Instead, it appears that the proponents of AB 2243 would like to skip Cal/OSHA’s detailed analysis and expert discussion with an end-run of legislation,” the opponents said.

Others argued the bill doesn’t go far enough. Officials with the Leadership Counsel for Justice and Accountability, a community advocacy group in the eastern Coachella Valley that sponsored the bill, believe there needs to be more strict enforcement to ensure that employers are following state regulations.

Despite the pushback, Garcia iconfident that both of those bills will be passed into law by the end of the legislative session in August. However, not every piece of climate legislation appears on track to gain approval from California lawmakers.

One proposal, Assembly Bill 2597, would require state housing officials to establish maximum temperatures allowed inside of dwelling unit, and require any building with a dwelling unit to have adequate cooling. The bill, which was co-authored by Garcia, passed the Assembly by a comfortable margin, but it has not advanced in the Senate.

Officials with LCJA, which helped sponsor the bill, told The Desert Sun the legislation won’t move forward this session — a disappointing result for climate advocates.

“If we’re implementing workplace protections, but not housing protections, a worker goes home at the end of the day and can’t get a bit of respite because their home is too hot,” Seideman said. “There needs to be a really holistic approach, thinking about all these different levels and all these different ways in which folks are going to be impacted by heat.”

“We have this very real issue where folks are coming home to 100-plus degree units or houses, and they don’t have the ability to get cooling from their landlords,” Seideman added. “The California Legislature touts itself for its record on climate change, but we have this very real climate impact that’s affecting communities and households right now, and there’s no action towards it.”

California’s latest budget, signed into law by Gov. Gavin Newsom on Thursday, includes some funding that was welcomed by climate advocates, with $150 million earmarked for grants to establish and bolster local climate resiliency programs, along with billions of dollars to combat drought and wildfires in the state.

But for Seideman, more funding will be needed to set up community resilience centers, which offer spaces for residents to gather and access social services, as well as provide response and recovery services during disaster situations.

While last year’s state budget included more than $100 million for community resilience centers, LCJA is pushing for a $1 billion investment to meet the statewide need for the facilities.

For Garcia, who was first elected to the Legislature in 2014, the bills up for consideration this year — as well as the millions earmarked to address climate change in the state budget — reflect issues that his office has been working on for years.

“This is something that we’ve been talking about and working on since our arrival in the Legislature, but with a caveat, I’ll say — with an interest in making sure that what we do from a public policy standpoint and an investment standpoint , that it has intentionality, for purposes of helping low-income communities that are impacted by climate change implications far greater than other folks,” Garcia said.

Tom Coulter covers politics and can be reached at [email protected]