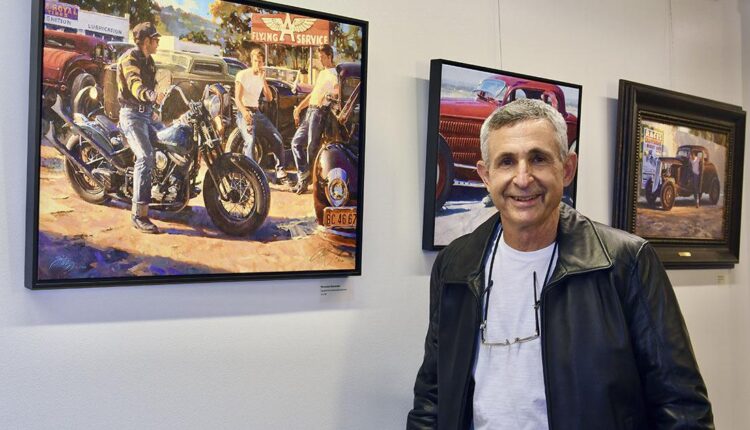 Inside, the calm white walls of the City Hall have been converted into the Malibu City Gallery, a welcome sight for a place that has been fairly inactive since the COVID-19 outbreak.

The exhibition shows the extraordinary work of the world-famous painter Tom Fritz, who specializes in depicting cars, hot rods and motorcycles. His detailed paintings with vivid colors bring drag races and motorsport to life with action-packed images. “You can hear the noise of the engines as you walk around,” noted one attendee. Fritz captures convincing images of muscle cars and roadsters in action in his color. His work seems to put the viewer in the midst of the energy and chaos of an illegal drag race or even a sanctioned Formula 1 championship.

Raised in the San Fernando Valley, Fritz grew up amid the ubiquitous Southern California auto culture of the 1960s and 70s, where hot rods, speedsters, stock cars and woodies were the adult toys of boys’ dreams. The visual artist now also paints these racers, vintage cars and motorcycles as an official Harley Davidson artist. He has won countless awards for his artistry and is particularly proud that he was selected by the United States Postal Service in 2013 to paint a series of muscle car stamps. A new series of pony car stamps will be issued in 2022 by the man who described himself as a former lawnmower mechanic up to a first-class artist with collectors around the world.

Fritz picked up a brush for the first time when he was seven years old. When his mother brought home a paint-by-numbers kit, he said he “fell in love with the smell of paint”. It wasn’t long before he got bored with the image he was supposed to copy and he soon destroyed it to create his own. He was self-taught until he honed his skills at Cal State Northridge.

After graduating in 1980, he worked as a staff artist for the defense industry and aerospace companies. In the early 1990s, he stated that he began painting “the source of the pictures I use today because I was getting bored of working in the bomb factories. I painted airplanes, naval ships, helicopters, marines and soldiers. ”With the encouragement of his wife Molly, Fritz began to paint what he loved. “I’ve dealt with motorcycles, hot rods and muscle cars all my life. I paint what I enjoy. “

Some classic car owners who like Fritz’s work drove their collectibles to the show. The parking lot was filled with vintage cars from the 1940s to 60s, including a Duesenberg from the 1930s. The oil painter brought all of these cars and more to life with impressionist brush strokes, though you’ll see giclee prints in Malibu.

“I try to capture all of the emotion, the excitement, the drama and the danger. That’s what I’m talking about here, ”he shared.

Fritz also has quiet moments in his pictures. “Just standing around cars. That would have been me in the mid 70s standing around a Camaro in a parking lot. The stories come from my life experience and things that I saw on the racetrack. “

This was the first art reception at City Hall and its Malibu City Gallery since March 2020.

“We couldn’t give love [a reception] As for the artists in the last group showing “Eye to the Future,” which closed last month, said Art Commissioner Fireball Tim Lawrence, who, along with Art Commissioner Julia Holland, helped make the show happen. “We’re trying to brand the Malibu City Gallery. We have a working gallery. I’m glad people are here, ”added Holland.

“His things are the best,” commented artist and actor Tony Dow of “Leave it to Beaver”. “He has a good eye for color and his brushwork is really good.”

The Tom Fritz exhibition “Deliver Me” ends on January 20th.

‘Then the Bill Came’: Year 4 of KHN-NPR’s Bill of the Month Is a Wrap

What to Buy, According to Dermatologists