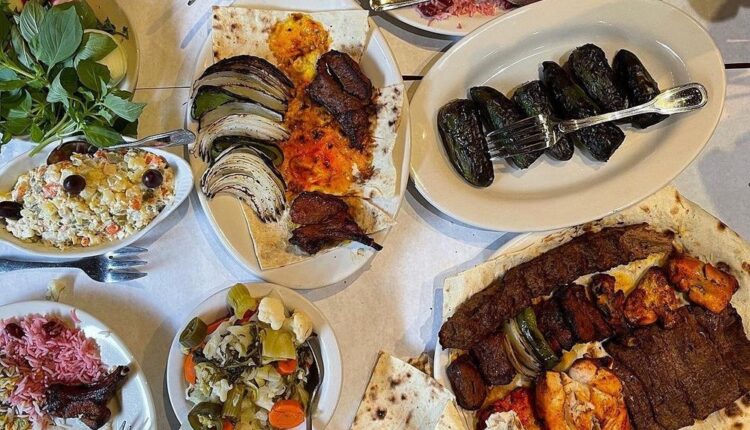 If you and your family celebrate Nowruz, hopefully, you have someone super talented cooking for you at home this weekend and don’t require a list like this. For the rest of us, who are seeking great flavors to accompany whatever Persian new year celebrations they’ve got cooking, we present to you seven, of the many, many, places where you can indulge in some of LA’s most appealing Iranian eats.

Let’s take it back to ’78, when this small daytime deli space steps with a resplendently sunny courtyard was opened, surviving today as one of Westwood’s oldest Persian businesses—many say the oldest. Despite the abundant kebabs, dips, salads, and desserts on offer, the large sandwiches on French bread are the big magnet come lunchtime, with intriguing fillings such as the spicy sausage known as sosees bandari, paper-thin mortadella, olivieh-style egg salad , and the most popular for a reason, the saffron-kissed hot beef tongue. Sadly, it’s been a few months since the deli served its infamous and delicious makhloot, due to current inaccessibility of its star ingredients, lamb brains, and lamb tongue. For nearly 30 years, this family-owned Glendale restaurant has been feeding the local Persian-Armenian community over great feasts of ghormehsabzi stew with tahdig, tart pomegranate-stewed fesenjoon, melt-in-the-mouth lamb shank, black cherry studded albaloo polo , and a small universe of kebabs, with various seafood options among them. Barg, made with charbroiled finely sliced ​​filet mignon, is a particular indulgence worth seeking out. A few blocks east of Santa Monica, you’ll find similarly devoted crowds and thoughtfully constructed traditional dishes among the extravagant dining rooms of Daryawhere synth-strapped crooner belts out forgotten soft-pop gems and standards from Iran, Europe, and the States on weekend evenings, and the decently-priced lunch specials make a nice midday deal.

Persian grocery stores vastly enhance life on the Westside and Santa Monica’s recently renovated Tehran Market is one of the gems. Stop by for marinated halal meats, seemingly endless stores of labneh, tea, nuts, fruits, preserves, sangak, prepared dishes, and sweets to bring home. But make a point of doing this on weekends, when the charcoal-grilled aromas from two massive parking lots of mangal will lure you into some of the city’s most satisfying lamb, chicken, salmon, and koobideh kebabs. Neither the name or façade indicate the life-affirming glories going on inside, where the fresh dough is patted over a large wooden palate then spread across a revolving custom oven that replicates the texture of the bed of tiny stones from which the legendary Persian bread sangak gets its name. Two minutes later, you’ll be presented with a hot, fresh, spongy sangak the size of a small blanket that should last you many days at home, if it survives the drive there. While there, stay for a breakfast of mirza ghasemi or order a wrap for lunch to get your koobideh or grilled chicken encased in that same fresh-from-the-oven sangak. Another reason to love LA? You have more than a few choices for Persian ice cream. On Westwood Boulevard, there’s popular Saffron & Rose, which sports scoops of saffron pistachio, jasmine, and date, as well as the rice noodle dessert faloodeh. And nearby, you’ll find Bloomfield Creamery, offering small-batch, honey-sweetened flavors like pink rose, chocolate honeycomb, and tart cherry and chocolate. But like many Angelenos, we have a big of a soft spot for Mashti Malone’s, which has been serving Hollywood for nearly 40 years with decadent specials like deep-fried, rosewater-soaked zulbia bamieh with a scoop on top, ice cream sandwiches bookended by crispy wafers, and cups of ice cream balancing a big baklava loghmeh where sprinkles usually go. The long standing business now has its own Westwood Blvd. storefront, too.

South Bay heads enjoy this kebab-heavy, Tehran-inspired restaurant that’s been feeding Long Beach for nearly 20 years. The selection is straightforward, focusing on kebabs made with care such as yogurt marinated chicken, traditional koobideh, coconut curry-marinated chicken, and tender lamb. There are also multiple variations on falafel, hummus topped with cranberries and barberries, and housemade baklava.

Fullerton’s excellent, creative, Michelin Bib Award-winning halal restaurant is running a Holi menu this weekend to celebrate India’s Festival of Colors. Then, this Monday and Tuesday, it will turn its attention to Nowruz, offering these three specials: chapli kabob, of spice-rubbed, minced lamb with eggs and fried tomatoes; Indian eggplant seasoned with spiced tomatoes and hung yogurt; and a New Zealand lamb shank with cardamom pods, caramelized carrots, and raisins called “The Dance of Kabuli Pulao.” Considering the inventive takes chef Imran Ali Mookhi is known for, it’s worth seeing what he does with Persian cuisine.