Santa Monica Catholic church targeted in Burglary; Suspects steal over $100,000 worth of equipment 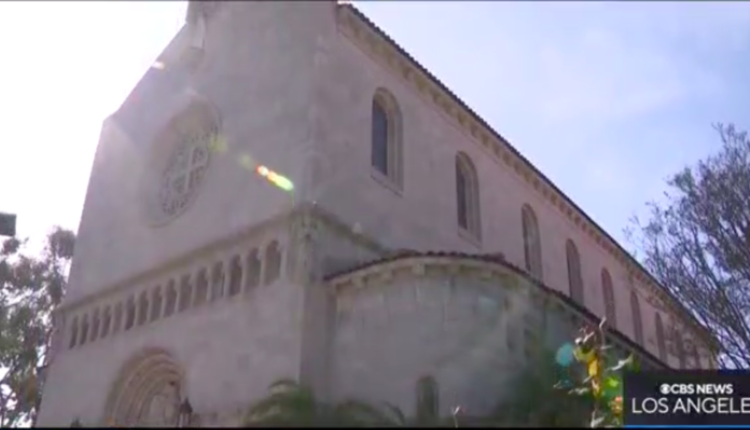 St. Monica’s Catholic Church in Santa Monica was targeted in a brazen burglary Thursday evening, when a group of thieves targeted the church, stealing over $100,000 worth of video equipment the church used to reach followers during the worst day of the coronavirus pandemic.

In spite of the loss, the church’s community is coming together to try and give back to the church.

Suspect wandering around St. Monica’s via flashlight in the middle of the night Thursday evening, when the equipment was stolen.

Authorities investigating the burglary believe that at least one of the thieves hid inside the building and waited until church services ended before striking.

Security footage from inside St. Monica’s shows a man who appeared to be surveying the church at around 4:30 pm on Thursday, even looking behind the altar where church officials store the video control board, which was later stolen.

“At about 9:30 they began to go through the church and take out a lot of our sound and our livestream equipment,” said Monsignor Lloyd Torgerson Saturday while speaking to CBS reporters.

Photos taken from the surveillance footage also showed a man wandering around the interior of the church via flashlight later Thursday evening. He is one of at least three people that authorities believe committed the burglary.

“During COVID it was the only way that we could get to people,” Torgerson continued.

Though no exact dollar amount has been provided just yet, an estimated sum of over $100,000 worth in cameras, sound and video equipment — all of which was donated — taken from the church on 701 California Avenue.

“To have that technology taken away, and I lead a rosary group with women in Abu Dhabi that rely on this parish for their spiritual nourishment, it’s quite violating and depressing,” said Alexandra Heric, a parishioner at St. Monica’s.

The group of thieves also attempted to gain entry into the tabernacle, where Catholics place unused consecrated bread, traditionally to be used at a later time or to bring to the sick — though they were unable to pry the boxes doors open.

However, they did manage to steal offering and donation money as well.

“It’s just heartbreaking when it’s happened here,” said Carol Arnett, another parishioner at St. Monica’s. “I know we’ll recover because we have a wonderful community.”

So far, volunteers have answered the call, donating their own cameras and switchboards to help the church continue their livestreamed services.

“What they did was wrong,” Torgerson concluded. “These are desperate times, there’s no question. But, somehow, we have to find in our hearts the ability to be able to forgive.”