Route Fire leads to SigAlert on Freeway 5 near Castaic 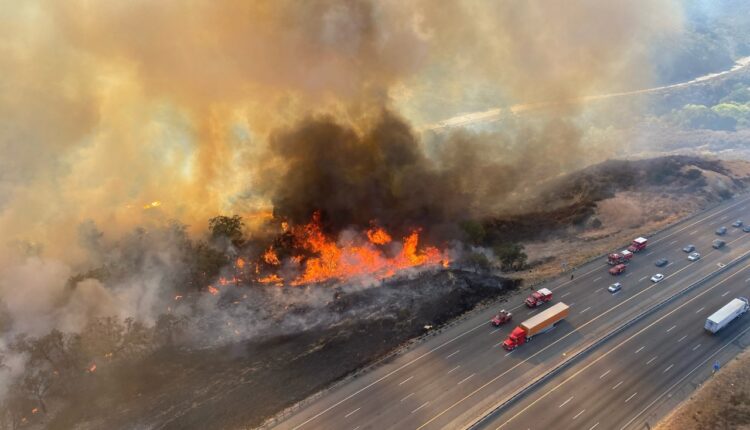 A nearly 400 acre bush fire near Castaic resulted in a SigAlert on Saturday afternoon and the complete closure of both directions of Freeway 5.

As of 9:09 p.m., two lanes were opened in both directions, according to Cal Trans, but motorists were advised to avoid the area if possible.

A second bush fire alarm is currently active on Templin Highway / 5 Fwy, which is reported on 50 hectares with structures at risk. At this time, SB I-5 on Vista Del Lago Rd is CLOSED & NB I-5 is CLOSED on Templin Hwy. Please plan your trip accordingly and monitor this post for updates. pic.twitter.com/uC2qmqq1TX

The Route Fire threatened building, according to the Santa Clarita Valley station of the Los Angeles County’s Sheriffs Department.

SIGALERT ISSUED IN CASTAIC. SB I-5 IS CLOSED AT VISTA DEL LAGO RD. AND NOTE I-5 IS CLOSED ON TEMPLIN HWY FOR AN UNKNOWN TIME DUE TO A BRUSH FIRE.

According to the California Highway Patrol, the southbound freeway on Vista Del Lago Road and the northbound lanes on Templin Highway have been closed.

The fire is being handled by the Los Angeles County Fire Department, which uses water droplets from helicopters.