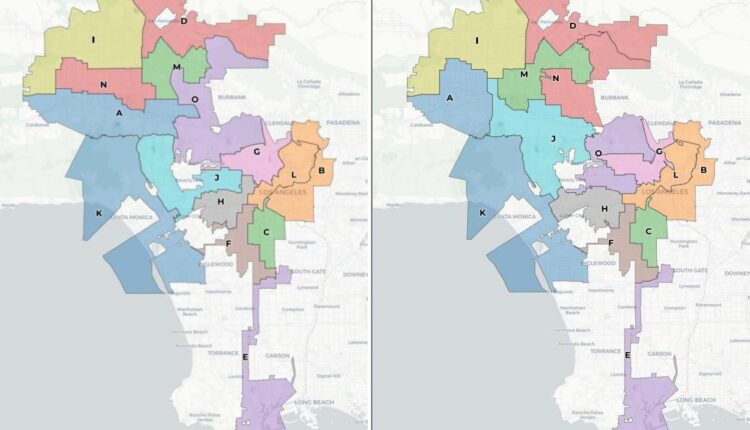 The two new draft cards released yesterday by the Los Angeles City Council’s Redistricting Commission: Draft plan K2, on the left, makes changes to the draft Plan K Corrected that were requested by redistribution officers and members of the public at Monday’s redistribution meeting … and Design plan L, on the right, illustrates the publicly filed card # 54277 recommended by Redistribution Commissioner Alexandra Suh at Monday’s meeting.

During a long and very detailed mapping session on Monday, September 27, the Los Angeles City Council’s Redistricting Commission focused primarily on making adjustments to their latest draft map, known as Draft Plan K Corrected. During the session, the group heard from a large number of voters, some (including several from our own Greater Wilshire area) strongly in favor of the draft Plan K Corrected as the best option presented so far … and more who voted against it certain aspects of the Plan-K cards. Following these comments, the Commissioners spent several hours addressing the specific points of contention and the result is the new Draft plan K2issued by the Commission yesterday and which will be the focus of the next meeting of the Commission tomorrow (Thursday, September 30th, from 5 p.m.).

In addition to the new draft plan K2, the city also had a new one yesterday Design plan L, which showcases a new version of a publicly filed card, Card No. 54277, that District Commissioner Alexandra Suh recommended at Monday’s meeting. Suh, who has advocated the incorporation of the Greater Wilshire and Koreatown neighborhoods into a single borough as well as a more traditional formation of Borough Council 4 – including parts of the Miracle Mile, Hollywood, Los Feliz and Silverlake – at recent meetings, has her dissatisfaction with Draft Plan K Corrected because it moves Miracle Mile and Greater Wilshire on CD 5, Koreatown moves on CD 10, and separates Los Feliz and Silverlake from Griffith Park. Suh has claimed that these divisions will separate and disenfranchise the large number of tenants who live in these important parts of the city.

The old draft plan K corrected (left) and the new draft plan K2 (right). The big differences can be seen in the gray shaded areas. (Click to view the full size image.)

Draft Plan K2 is a revision of the Draft Plan K Corrected, which was discussed in detail at the last meeting of the reallocation commission on Monday. At first glance, the two maps in the Plan-K draft look pretty similar, but a number of specific details have changed at the request of the reallocation officers and the public who testified at Monday’s meeting. For example, as shown in the shaded circle areas above, Design Plan K2 moves the Palm trees and beverlywood Boundaries along the southern part of the District K / J border to reunite a slice of Beverlywood with the rest of this community. It moves too Bel Air and parts of Beverly Crest from District O to District J. Further east it moves and unites Eagle Rock in District B. again. It fits the line between Districts G and L keep Thai city and historical Filipino city together … and it brings Echo park into it District G.

Draft Plan L is a slightly smoother version of publicly filed Map No. 54277 recommended at Monday’s meeting by Redistricting Commissioner Alexandra Suh, who requested a map plan that would combine the Greater Wilshire and Koreatown areas into a single district, but not ‘not satisfied with other details of draft plans I and J, which were the city’s first response to their request. Suh said she was disappointed that Drafts I and J would split the Los Feliz, Silverlake and Koreatown neighborhoods into separate boroughs, effectively disenfranchising the large tenant community in these and adjacent areas.

For example, the new Draft Plan L holds most of Greater Wilshire and all of Koreatown in District O, along with the longstanding CD-4 areas of Griffith Park, Los Feliz and Silverlake. And – unlike Design Plan K2 – the new District O of Design Plan L would not include any neighborhoods in the San Fernando Valley.

The draft Plan L will also be reviewed in detail at Monday’s redistribution meeting, but although it was only released yesterday, there has already been some public outrage against it.

For example, the Hancock Park Homeowners Association, which approved the draft “Plan K Corrected” map at Monday’s meeting and has worked hard for the last week to bring the entire Wilshire area with other interest groups to the west in District J, has Unite, an email to the community this morning that said, “Plan L cynically holds Greater Wilshire (50,000 residents) together, but connects us to Park La Brea, a massively redesigned Koreatown (120,000 residents), Los Feliz and Silver Lake to form a council of tenants’ district. ”The email urges neighbors to attend Thursday’s meeting to speak in favor of draft Plan K2 and against Plan L.

Another group called Laurel Canyon United also strongly opposes the draft Plan L because it divides the hillside areas into two districts (which the draft Plan K2 doesn’t). This group is planning a peaceful, COVID-safe protest at the Laurel Canyon Country Store tonight at 5 p.m.

And we’ve heard complaints from people in the United Neighborhood Neighborhood Council area that, unlike Plan K2, Plan L was removing the eastern boundary of District H (likely CD 10) from its longstanding location on Normandy Ave. moved west on Gramercy Ave., divides both the UNNC and Harvard Heights-Western Heights HPOZ areas into two separate city council districts, bisecting the Western Heights, Angelus Vista and Country Club Park neighborhoods in UNNC territory and all Harvard Heights and West Adams Heights separate Sugar Hill neighborhoods from the rest of the UNNC territory and their longstanding home in CD 10

Instead of eventually uniting Greater Wilshire into a single council district, as the draft Plan K (and required by the GWNC) would do, the GWNC area would be divided into three different council districts (H, O and G) under Plan L, such as shown below.

The next meeting of the city council’s redistribution commission will take place tomorrow, Thursday September 30th, at 17 o’clock about zoom.

Public comments will be recorded at the meeting, but only for a limited time. So if you want to speak, please register early and raise your hand. In addition, written comments can still be emailed to the Commission at [email protected]

Finally, if you want to watch the final meeting in this series discussing the changes to Plan K, the video is now available here.