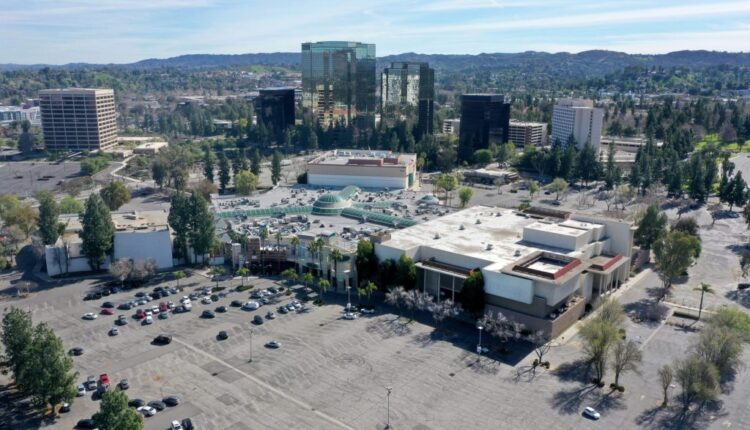 The Rams’ stadium in Inglewood is a modern marvel worthy of Super Bowl champions. Their training facility in Thousand Oaks, not so much.

But a solution to that problem might be coming.

The Rams weren’t commenting Thursday, with either confirmation or denial, on a Los Angeles Times report the team is negotiating to buy the site of the vacant Promenade mall in Woodland Hills to use for a future practice facility and headquarters.

The West San Fernando Valley has long been seen as a potential destination for the Rams, and the 34 acres owned by Unibail-Rodamco-Westfield at Topanga Canyon Boulevard and Oxnard Street have been seeking a purpose for years.

The most recent announced plan for the land just north of the 101 Freeway called for a $1 billion mixed-use development to be built by 2035, including apartments, hotels, offices, entertainment and a sports arena.
The morning after Super Bowl LVI the SoFi Stadium is quiet with only a few fans milling about and clean up crews working on dismantling the set up in Inglewood on Monday, February 14, 2022. (Photo by Brittany Murray, Press-Telegram/SCNG)

The project received a green light from the Los Angeles City Council in 2020 but it’s unclear when the demolition of the shopping mall will begin. The mall is expected to be removed during the project’s first construction phase.

Local officials say if it’s true the Rams’ pre-season presence could be a good fit in a part of the Valley that is looking to transform and where the Rams organization has already developed some goodwill.

“I’ll never forget how a few years ago the Rams jumped in to help Cleveland High School’s football team after money they raised for the upcoming season was stolen,” LA City Councilman Bob Blumenfield reflected in a statement on Thursday. “They swiftly delivered brand new gear to the players who had worked so hard. The Rams have continued to be incredible partners in helping the Valley and our City.

“This sounds like a really great opportunity and would be good news if true,” he added. “There is a plan in place for a venue at that site that protects the community and could let our Super Bowl champs get something up and running in my district pretty soon, which is incredibly exciting.”

Rams coaches and players have looked forward to a more up-to-date facility ever since they took up residence on the California Lutheran University campus in Thousand Oaks after owner Stan Kroenke moved the team back from St. Louis in 2016.

At the current facility, they practice on two outdoor fields, and off-the-field work is done in temporary bungalows.

The team’s business offices are separate, in Agoura Hills.

A new venue presumably would include an indoor practice facility. That would keep the Rams out of the frequent high wind that can make practice difficult in Thousand Oaks. Three days before the Super Bowl, a forecast of 30-mph wind prompted Coach Sean McVay to move the Rams’ most intense practice of the week to the Rose Bowl in Pasadena.

A new site also could host the Rams’ summer training camps. The Thousand Oaks facility has no room for fans, which is why the Rams hold their training camp at UC Irvine.

Cal Lutheran is about 50 freeway miles from SoFi Stadium, the $5 billion stadium in Inglewood where the Rams began playing home games in 2020 and won the Super Bowl over the Cincinnati Bengals on Feb. 13.

The Promenade mall land is about 30 miles from SoFi.

The Rams would follow the Chargers in planning a change of practice locations. The Chargers announced in November that they would move their training facilities from Costa Mesa to El Segundo.