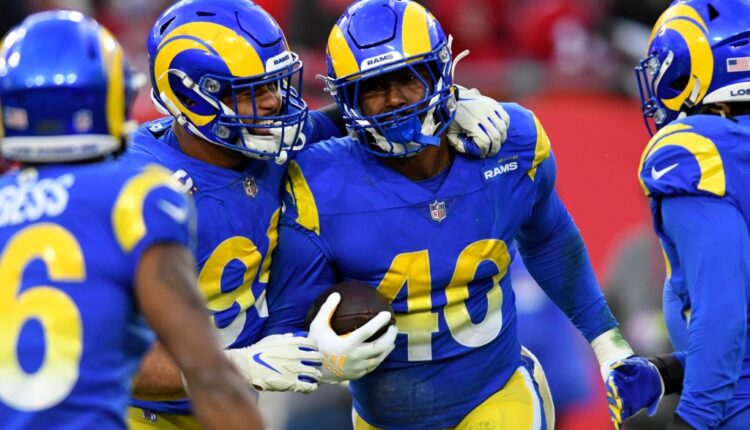 The Rams’ pass rush would have been trouble enough for the Cincinnati Bengals’ Joe Barrow in Super Bowl LVI without anyone jinxing the young quarterback and making it worse.

But Bengals coach Zac Taylor might have inadvertently brought this bad matchup on his team in a “be careful what you wish for” moment in November.

When the Rams made the trade with the Denver Broncos to add outside linebacker Von Miller to the sack attack led by defensive tackle Aaron Donald and edge rusher Leonard Floyd, Taylor texted Rams coach Sean McVay to say, “Great pickup.”

“We were about to play Denver in a couple of weeks, and I was thankful Von wasn’t going to be a part of Denver,” Taylor said with a pained smile Monday. “Little did I know it was really going to come back (and haunt me) here at the Super Bowl.”

For the Rams to win the Super Bowl on Sunday at SoFi Stadium, they must take advantage of the kind of considerable edge rarely seen in games between teams this good.

The Rams’ defense sacked quarterbacks 50 times during the regular season, third-most in the NFL. Burrow was sacked 51 times, more than anyone else in the league.

The Rams’ strength was on display in the playoffs, where three sacks of Tom Brady in the divisional round victory over the Tampa Bay Buccaneers included a strip-sack by Miller. The Bengals’ weak spot has been there for everyone to see too, Burrow having to overcome being sacked nine times as he led a last-second win over the Tennessee Titans in the divisional round.

Burrow, a boyish-looking 25, knows what he and the Bengals’ offensive line are about to face in the Rams’ manly-looking pass rush.

“They’re a very good defensive front,” Burrow said of the Rams. “It’s going to be a challenge for our guys, but they’ve worked really hard to put them in this position, and I know that our coaching staff has a great plan for them that they’re going to be able to go out and execute.

“But obviously guys like Aaron Donald, Leonard Floyd and Von Miller are guys that are going to get pressure. So it’s going to be one, how I handle the pressure, how I’m able to get the ball out of my hands and get it to my play-makers in space, and two, how we’re going to be able to handle them up front.”

Burrow said he has “the utmost confidence in our offensive line to make it happen.”

The Rams aren’t about to jinx themselves or fire up the Bengals by speaking disrespectfully of that offensive line.

“They’re where they’re at for a reason,” Donald said Monday on the first day of Super Bowl week interviews view Zoom. “Obviously the guys up front helped them do that. They’re playing in the Super Bowl just like I am and we are.”

Something else not to disrespect: Burrow, the No. 1 overall draft pick from LSU whose rookie year in 2020 was cut short by a knee injury suffered when he was hit while throwing, has escaped enough sacks and shaken off enough blows to rank among the league’s passing leaders this season.

“One guy can’t take him down,” Miller said last week of the 6-foot-4, 221-pound Burrow. “I don’t like making comparisons, (but) he’s similar to (the Buffalo Bills’) Josh Allen when it comes to escape, and (the Arizona Cardinals’) Kyler Murray and all of these guys. He can throw the ball as good as anybody in the league.”

But the Bengals (13-7, including playoffs) gave up all of those sacks for a reason too.

Burrow blames himself for sometimes holding onto the ball for too long, trying to make a big play.

Meanwhile, the Rams’ defensive front needs little introduction. Donald is the three-time NFL Defensive Player of the Year. Miller leads active NFL players in career sacks. Floyd was ninth in the league in sacks in 2020.

“You spend time and energy talking about Aaron Donald, and then you’ve got these other elite players that are surrounding him as well,” said Taylor, who was a graduate assistant coach at Texas A&M when Miller played there.

The Rams are 10-3 this season when they record three or more sacks, and the Bengals are 6-6 when they give up three or more. Cincinnati is 2-3 against teams, like the Rams, ranked in the top 10 in sacks, and 2-3 when facing players, like Donald, among the sack leaders. Burrow is the first quarterback to absorb the most sacks and make the Super Bowl in the same season.

All of that favors the Rams’ pass rush over the Bengals’ pass protection.

“I think this game could be won up front. That’s just like any other game,” Donald said. “If we do our job up front, I think we can win this game.”