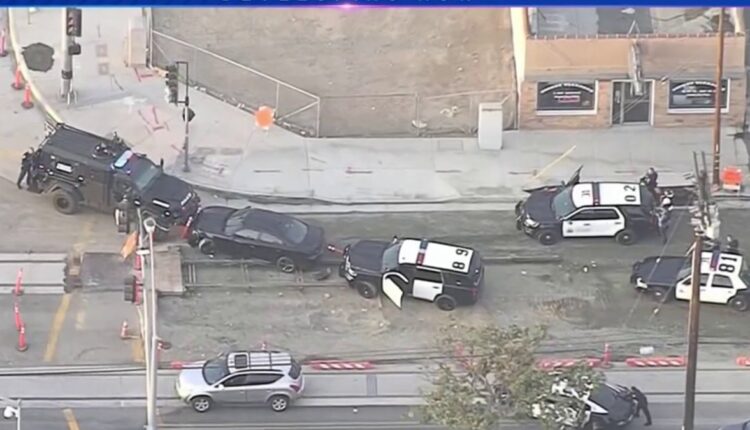 A suspected armed robbery suspect was fatally shot and killed by Anaheim police on Tuesday following a car and helicopter chase in Santa Ana, and Orange County prosecutors opened an investigation into the shooting on Wednesday.

The suspect was seen by police in Santa Ana around 5 p.m. Tuesday with a stolen car. Shane Carringer of the Anaheim Police Department.

An Anaheim police helicopter joined the chase along with Santa Ana Police and the suspect’s car was disabled in a construction area near Santa Ana Boulevard and Bristol Street where police attempted to negotiate a surrender with the suspect said Carringer.

The man in the stolen car was wanted on several arrest warrants, according to police.

Police negotiators spent three hours negotiating with the suspect before SWAT staff from the Anaheim Police Department took over. They worked over an hour to get the suspect to surrender, but the man refused and remained barricaded in the stolen car.

Shortly before 10 p.m., officers used chemical agents to remove the suspect from his vehicle, and after he got out, a police officer shot him dead. Carringer said that only Anaheim police were involved in the shooting.

The video shows the man getting out of the car after a cloud of chemicals was released. Several shots can be heard on the recording. Investigators worked Wednesday to determine how many shots were fired and by whom.

The suspect died at the scene, police officers were not injured, the police said. Details of why officials started the shootings were not available.

Police did not disclose the name of the man who was fatally shot until the family was notified.

The Santa Ana Police Department will assist the prosecutor in their investigation. The Anaheim Police Serious Incident Review team is also investigating.

On Wednesday morning, Santa Ana Boulevard near Bristol Street was closed to vehicles and pedestrians for investigation.