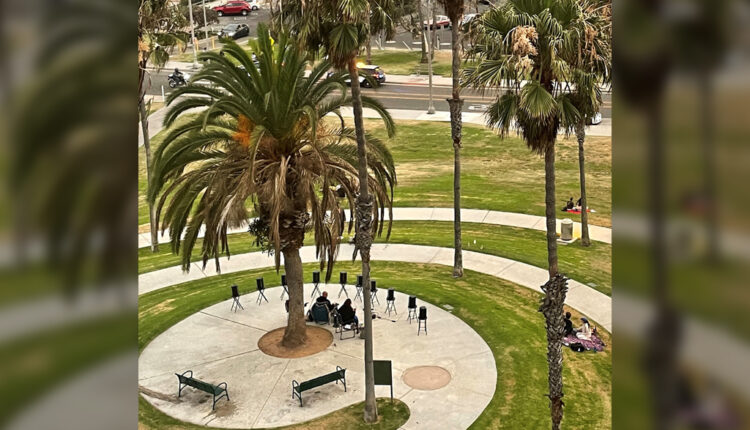 A noise war is raging in Santa Monica, taking place in the popular and picturesque Ocean View Park next to where I live. Somehow I was reminded of the 1990 coming-of-age film called Pump Up the Volume, in which Christian Slater played the lead role and was written and directed by Allan Moyle. The story is about a teenager who runs his own pirate channel for other teenagers and causes a stir.

Many years ago I met Moyle, who was reading two of my scripts and invited me over to Shutters for a drink to talk about. Moyle was born and raised in Quebec, but when I met him he lived in Venice and was a bit eccentric. Instead of dogs as pets, for example, he had chickens in his back yard, which you don’t see in a typical residential area. (Though I suspect part of the charm of Venice is that it is far from “typical”.)

In 1995 Moyle made a similar film, Empire Records, but it hit the box office flop. However, it later developed a cult following when it launched the careers of three actresses: Liv Tyler, who appeared in the “Lord of the Rings” trilogy; Debi Mazar, who starred in Goodfellas: and Renée Zellweger, who won two Academy Awards including Best Actress for her notable portrayal of Hollywood icon Judy Garland in Judy.

Speaking of Zellweger: while her house was being built in Malibu, she lived on the shore. In fact, her apartment was in the South Tower, which is adjacent to Ocean View Park, which brings us back to the above-mentioned noise “war” that began after the Covid pandemic began.

Various bands, including Jazz and Easy Listening Rock, started playing in the park from the circle at the top of the hill and were well received.

Little by little, however, the music got louder, the hours increased and DJs started bringing up to 10 speakers and started blowing up recorded music.

On Saturdays and Sundays the decibels are off the charts and this can go on for up to 12 hours a day. This may be fun for passers-by, but it drives residents crazy. Not only do they hear the music, they also feel it when the walls rattle.

Since I live in the North Tower of Shores, I am not affected by the noise, but I’ve been on the phone with friends in the South Tower and can hear the cacophony over the loudspeaker. While the high decibels of music would be illegal in a residential area, it is not illegal in public parks.

You see, public parks are exempt from city noise laws. The problem is that Ocean View Park is right next to the Shores and the Sea Colonies. One resident noticed that the music outside was louder than his TV inside. Another says the only way out of the deafening noise is through the shower, as the thickly tiled walls and water drown out the noise. With a bit of black humor, she jokingly commented: “If only I could just put a chair in the shower and the WLAN would be there.”

In desperation, the residents of the south tower turned to City Councilor Phil Brock, who kindly agreed to meet them this Sunday for a “tour” through the musical chaos. Residents are hoping for some kind of compromise between the number of decibels allowed and the number of hours a person or group can blow their music.

I understand the plight of the residents, because seven years ago the north tower was blown up for six hours straight from the vegan Oktoberfest with electric guitars and drums, which was a great idea, but turned out to be a great fiasco. The big mistake was where the music was executed. Instead of going to the beach, which was practically empty and where the music was absorbed by the sound of the waves, they let the bands play right into the west side of the north tower, with the percussive effect causing the windows and sliding glass doors to wobble.

I called Alderman Kevin McKeown and got his voicemail. Even with the windows closed, the noise in my apartment was so deafening that McKeown could barely hear the message. I wrote a column about it, but got trolled royally by vegans with comments like, “Old man, why didn’t you just take out your hearing aids?” #Ouch.

The irony was that I thought a vegan Oktoberfest was a great idea, but it had definitely gone wrong. Just as music in the park is a great idea, except when it’s an outdoor disco that rattles at the window for 12 hours. I hope a compromise can be found where they pump down the volume. In the meantime, forgive me, but I can’t help but wonder if Alan Moyle still has chickens in his yard.