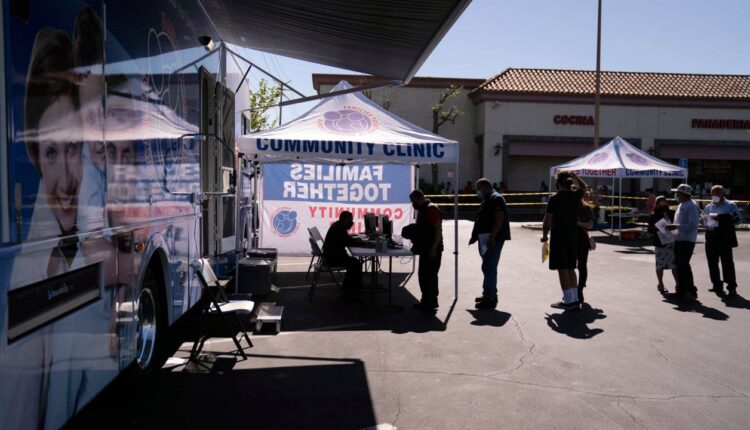 SANTA ANA, Calif. (CNS) – Orange County’s COVID-19 hospital admissions continued to rise on Wednesday, reaching levels not seen in 11 months, pushing the county to No. 2 in the state on COVID-19- positive patients, behind only Los Angeles County.

The number of hospital admissions rose from 1,013 on Tuesday to 1,071 on Wednesday, with the ICU number increasing from 159, according to the Orange County Health Care Agency.

The county also recorded a whopping 11,092 new positive COVID-19 tests on Wednesday, bringing the cumulative total since the pandemic started to 413,978.

“You can look at the data in two different ways,” said Frank Kim, Orange County CEO. “We continue to see increases in daily positivity and the number of cases, but that is also a function of the increase in testing. I also think this is not being adequately reported because so many people have access to rapid tests (at home). “

Kim also said it made no difference whether the hospitalized patients had mostly COVID-19-related symptoms or whether they were so-called “chance” cases of a patient hospitalized for another illness who happened to be positive the virus has been tested.

“If you have today’s big numbers, it really doesn’t matter,” Kim told the City News Service. “It’s the general trend to watch. Hospital numbers are increasing and they haven’t slowed down yet, so that’s worrying.”

The county has 19.3% of its intensive care beds and 64% of its ventilators. Of the hospital patients, 87% are unvaccinated and 88% in the intensive care unit are not vaccinated, according to OCHCA.

The county’s adjusted daily case rate per 100,000 population decreased from 108 on Tuesday to 103 on Wednesday. The test positive rate rose from 25.2% to 25.9% and rose from 27% to 28.3% in the healthcare equality quartile, which measures underserved communities hardest hit by the pandemic.

“It’s hard to say when this will wear off,” Andrew Noymer, an epidemiologist and professor of population health and disease prevention at UC Irvine, told the City News Service on Tuesday.

“… I still don’t think you have to hide in the basement, but people have to base their activities on their risk and the risk they pose to others. A year ago I said they should be in theirs Hide basement especially if you haven’t been vaccinated because they stepped that up a year ago and real people started getting it, not just medical staff. Now I think people can still go out, but … if you live with a great grandmother, or if you are immunocompromised for some reason, then you must realize that a pandemic is still raging. “

The county is in much better shape than it would have been without vaccines, Noymer said. Also, the Omicron variant appears to have milder symptoms than previous variants, he added.

Orange County’s board of directors on Tuesday ordered the county employees to be on sick leave for 40 more hours to encourage them to stay home in bad weather.

About 600 county employees, out of a total of about 17,000, have been infected since mid-December, Kim said. If an employee becomes infected, he will be absent for at least five days due to the need for quarantine. That can eat up a worker’s entire sick leave so they may be more inclined to come to work with mild symptoms in the future, Kim said.

The county recorded three more COVID-related deaths on Wednesday, two in last month and one in January last year.

The death toll in December is now 62. The district’s deputy health officer, Dr. Regina Chinsio-Kwong said Friday that 50 of those who died in December were unvaccinated and seven were seniors.