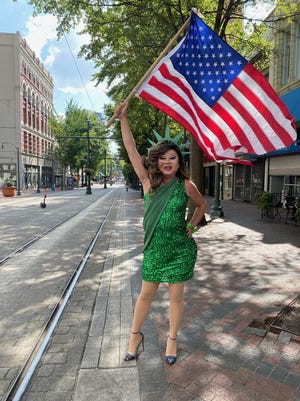 Bruce Bui, the Ballet Memphis costume designer, known for being an eccentric performer, generous volunteer, and constant presence in Memphis’ art and queer communities, died Saturday at the age of 44.

On Friday, Bui adorned a wig, outlined his face with makeup, and applied bold eye shadow. He appeared on the stage of the Evergreen Theater with his closest friends and drag queen colleagues, with whom he had performed for years.

Bui died of a heart attack early the next morning after a final appearance as his drag personality Bianca at the Evergreen Theater. On his last appearance, he was accompanied on stage by his husband and partner of 17, Greg Hammond.

“He left everything on stage that night,” said his close friend and drag queen colleague Micah Winter.

News of his unexpected death reverberated through the performing arts and queer communities in Memphis, marked by a wave of shock and sadness on social media.

Those closest to Bui describe him as a person who is constantly energized by his work and many fundraisers. But they also describe a person with a calm, warm and attentive personality in an off-stage setting.

“He was very focused, one-on-one,” said Mark Campbell, a fellow cast member at Friends of George’s, the Evergreen Theater’s resident group that raises funds for nonprofits in Memphis.

For 20 years, Bui designed costumes and visions for Ballet Memphis as a cloakroom attendant and resident costume designer.

His work with Friends of George’s helped raise thousands of dollars annually for nonprofits in the Memphis area.

Before embedding himself in several art institutions in Memphis, Bui’s life arc began in Vietnam, where he was born.

One night, at the age of 8, his parents woke Bui and his siblings. They were among the thousands who fled the country in the years following the collapse of the South Vietnamese government in 1975.

“His parents got him up in the middle of the night and drove him to the beach, got on a boat and drove away,” said Hammond.

After spending six months in a refugee camp in the Philippines, Bui’s family moved to Los Angeles.

As a child growing up in the San Fernando Valley, Bui’s penchant for design began to take shape, according to Hammond.

“He made the clothes for his sister’s Barbies,” said Hammond. “He would make these Halloween costumes for her. They were very, very elaborate and theatrical.

Although his parents hoped he would get into the business, Bui switched when Bui realized he could graduate in costume design and make a living doing what he loved most, majoring at California Lutheran University.

Hammond and Bui met shortly after Bui moved to Memphis. As Hammond was dancing in the now closed Backstreet one evening, he noticed Bui on the dance floor.

“I just thought he was a really cute guy,” said Hammond. “He was there with one of the dancers from the ballet, and then he came up to me and sat next to me … he was pretty straightforward.”

The two would be together for 14 years before getting married on a whim in a Shelby County courthouse one Monday during their lunch hour.

Referring to his last show on Evergreen, Hammond said, “He looked great that Friday night, he really did … nobody expected it. He was only 44 years old. He was full of life.”

Ballet Memphis CEO and President Gretchen Wollert McLennon estimates that Bui has designed wardrobes for at least 50 shows over the past 20 years. His vision and attention to detail, she said, caught the attention of nationally renowned choreographers across the country.

In the days since Bui’s death, McLennon said, she and Ballet Memphis Art Director Steve McMahon began to realize “what an iceberg Bruce was”.

“We knew the tip,” said McLennon, “but there were so many layers of Bruce Bui and so many other ways he influenced the arts and designers and people rising up the ranks who wanted to join be the art community. “

In the days since his death, McLennon said, Bui’s impact on the art ecosystem has been an important issue as artists and designers have offered to help the cloakroom department.

“You could see his size in his personality. He had this energy and this reach and he had this calm elegance,” said Gretchen Wollert McLennon, CEO and President of Ballet Memphis.

In everything he did, Bui offered generosity

Winter, a fellow drag queen whose friendship with Bui was cemented by countless hours of makeup and wig applications at side-by-side stalls at Evergreen, emphasized his friend’s fondness for helping others.

One year when Winter was about to host the Condomonium event, Bui approached him and asked if he could design a dress for winter – which was no small gesture given the hours Bui had already devoted to design at Ballet Memphis .

“That’s the kind of survey he’s done for the people around him,” said Winter. “He would just give up his craft, time, and amazing brain.”

Among Bui’s many gifts, Winter said, was the ability to calm conflict and “lower the temperature of the room.”

“He saw honesty as a great kind of kindness,” said Winter. “He was such a reliable and reassuring voice of reason. If someone was acting like an ass, he wouldn’t be afraid to say, ‘Hey, you’re way out of bounds now. I’m only giving you this review because I know that you can take it and I know that you can be the best version of yourself. ‘”

Bui, said Winter, saw honesty as a gift to give to others.

Bui’s friends, mourning his loss, say they intend to honor their friend by approaching them as a community.

“He would want us to go on, love each other, stick together like family,” said Campbell. “This calm, this love that he gave me and so many others … I will take it everywhere with me. He will always be a voice in my head that leads me forward.”

Bui is survived by his husband and a select family of close friends. Reminder regulations are still pending.