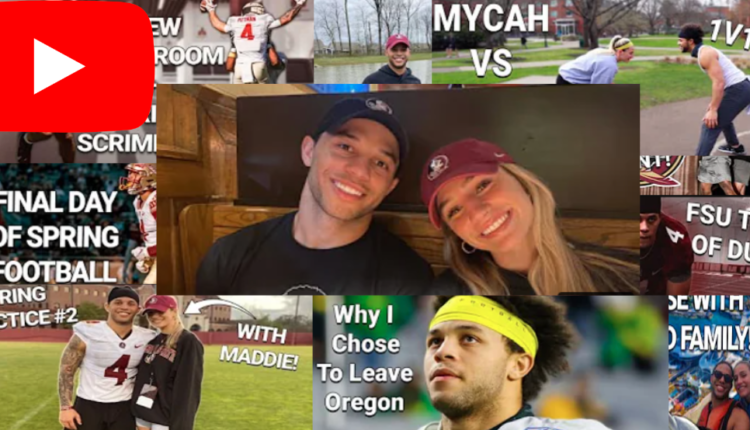 TALLAHASSEE—They briskly walk through the gateway leading into Florida States practice field, side by side. Defensive end Jared Verse, at 6-foot-4 and 251 pounds, has nearly half a foot and 50 pounds on Mycah Pittman.

But Pittman doesn’t back down to verse, who already triumphantly established himself as FSU’s top trash talker months into his Tallahassee tenure.

Verse is blue-collar, a former 0-star recruit from rural Pennsylvania who made it to FSU via the transfer from FCS program Albany. Pittman is blue-chip, a former four-star recruit from the luxurious area of ​​the San Fernando Valley in California who went to Oregon before transferring to FSU.

The dichotomy here is evident, yet the similarity that matters is striking.

“Out of the perimeter? I could get you, I could definitely block you,” Pittman threw back, calmly and confidently with a mischievous grin.

Back and forth it went for 100 yards, all the way into the indoor practice facility. Verse has distinguished himself as FSU’s tone setter on defense this offseason, yet Pittman is the needler of this offense – and team – needs.

Pittman is on the shorter side of a prototypical receiver at 5-foot-11, comes from a football family with dad (Michael Pittman, a former running back for the Tampa Bay Bucs) and brother (Michael Pittman Jr., who just had his first 1,000-yard season as a receiver in the NFL), and is a star of sorts with a YouTube channel that’s just shy of 70,000 followers: Mycah & Maddie.

But don’t let any of this fool you. Pittman comes to FSU with grit and a fire burning beneath his laid-back California demeanor, bringing this beautiful blend of insightfulness and the fear of failure to work to his advantage. He knows what motivates himself, and he also has the experience to know what motivates others.

“Jared, if I talk trash to him, like tell him he has skinny legs or something, he’ll come on [the video screen] and won’t stop,” Pittman said, grinning.

Behind a constant smile and a camera, Pittman is carving out his place in FSU’s locker room as a lightning rod of sorts. The best organizations have friction creators, and that feels very much like Pittman’s role since getting to FSU.

This was on display through playing style alone in the spring as Pittman shook off some rust after a long layoff following his transfer. By the middle of spring practice, Pittman was making splash plays through the air by routinely winning heavily-contested catches downfield. And in FSU’s spring game, after leaving the scrimmage with a shoulder injury that he suffered on a tunnel screen during a successful two-point conversion, he later returned to score a touchdown on a sweep in which he dragged a couple defenders into the end- Zone.

“Rarely do you ever see him going backwards.”

That accurately sums up Pittman’s personality.

Norvell is a major reason why Pittman came to FSU as it was appealing to play for a former wide receiver/receiver coach. He felt like Norvell understood how to cater to a wideout, whether that’s allowing for some leeway on a specific route to best fit a receiver’s strengths or forcing them the ball to get them into a groove.

And perhaps more important, Norvell made Pittman feel like he can be himself…something that he lost at Oregon.

Earlier this offseason, when Pittman went a couple weeks without posting a video on Mycah & Maddie, Norvell came up to him and said “you haven’t uploaded in two weeks, what are you doing?”

“At Oregon, [the camera] just wasn’t welcomed. But at Florida State everyone is like ‘hey put the camera on me,’” Pittman said. “Coaches embrace it, they know what I bring to the table always. So I can show people how hard we work.”

More on that in a bit.

First, the origins of Mycah & Maddie.

Pittman started the YouTube channel per the advice of his older brother, who had his own page that he ran with his partner. The idea of ​​becoming more comfortable in front of the camera was appealing to Pittman – he still cringes at his first on-camera interview in high school – as was the understanding that he had a platform to build and monetize in college.

The concept behind the channel was to show the public the day in the life of a high-profile college athlete. Workouts and interactions with teammates are part of Pittman’s videos, but moments away from the field – like grocery shopping on a budget or bowling with his teammates, or the time someone broke into his car to steal his shoes and jacket – give a little glimpse into Pittman’s day-to-day routine.

He usually records one day a week, and it would take a little more than an hour to edit the video…so it isn’t a big time warp. His editor also happens to be his girlfriend and co-star of the channel, Maddie Scherr.

“She’s quick with it, I’m the slow guy,” said Pittman, who handed off editing duties to Scherr about a year ago.

There’s some debate on who reached out to who first, but Pittman and Scherr started dating about two years ago. Scherr, a standout hoops player who transferred from Oregon to Kentucky this offseason, also had her own social-media platform, but the two quickly decided it was optimal to combine forces and share their relationship with the world.

“We’re not going to re-do a take…what you see is what you get,” Scherr said. “You never know what’s going to happen that day or that moment. If we’re bickering or something like that, it’s good for people to see, it’s healthy. You’re definitely not going to get along all the time.”

The video blogs, or vlogs, last about 10-15 minutes. They’re snippy, quick-paced and feature the couple as well as their friends/teammates. For Pittman, there’s an extra level of accountability that comes with being on camera as it highlights his work habits. Teammates generally seem to like the YouTube platform, sometimes jockeying for a chance to hold the camera and put their own spin on a portion of an episode.

But with the pros of a popular YouTube channel comes cons. There’s a level of vulnerability that Pittman and Scherr expose themselves to, and that can lead to toxic comments about them as athletes or their relationship.

Pittman has learned to block that out and refuses to go in the comments section – “I’m a confident human being. If I think my girlfriend is beautiful, she’s beautiful. If I think I’m a good football player, I’m a good football player. I don’t care what anyone else says about me” – and that’s something Scherr is learning as well. There were times when she’d read a hateful comment and repeat it to Pittman, and he’d have to ask her to stop. Eventually she also figured it was best to tune that out.

One of Pittman’s most popular episodes to date is his “Why I left Oregon” video blog. He opened up about the disappointment of having a coordinator who believed in him and recruited him – Marcus Arroyo – leave (to become UNLV’s head coach), dealing with a new coordinator who he felt like didn’t give him chances despite strong practices, and the idea of ​​his identity as a football player being stripped away from him as he also felt like he let family down.

In hindsight, Pittman was on the verge of depression. He didn’t understand the significance of mental health at that point, yet the disappointment of not succeeding weighed on him.

“Not only did I feel like I deserved a lot more than I was receiving there, but I felt stuck there because I was set up to be stuck there, sadly,” Pittman said.

Pittman’s options upon transferring from Oregon included FSU, Arizona Stateand Fresno State. Norvell was a huge reason why he picked the Seminoles as Pittman, with 547 receiving yards the past three seasons, wanted the chance to help unlock the coach’s previous passing success at memphis. FSU viewed Pittman as somewhat of a chess piece who wouldn’t mind doing the dirt work as a blocker or runner while also bringing value as an explosive receiver and punt returner, and the opportunity for that versatile role also appealed to the redshirt junior.

Getting to FSU has changed Pittman for the better. He feels loved and embraced by teammates – he went night fishing with Jordan Travis, who he talks to daily, a few weeks ago off Apalachee Bay and got skunked outside of a few blue crabs – and coaches.

“Anyone in Mycah’s life who knew him in-season during his time at Oregon to now, you can see that it’s a world’s difference,” Scherr said. “Some game-day vlogs, after games, he was so upset that we couldn’t close out the video. He couldn’t do it. There has been 100 percent a change.

“That was definitely a hard season of life. He’s so strong, so passionate about what he does, such a hard worker, and that’s encouraged me, my ability to work at basketball because I see that passion in him.”

Pittman is encouraged to be himself at FSU, leading him to be the charismatic and feisty veteran who knows how to instigate a fiery defender like Verse or bring out the funny side of a soft-spoken person like Travis.

As for Mycah & Maddie, there are challenges that come from a content perspective with being states apart now. And real-life challenges as well as they are in a long-distance relationship. A running bit on the channel is Pittman FaceTiming Scherr and saying he’ll propose if she picks up, knowing how busy she is with her athletic and academic schedule during the day.

Yet that adjustment, as Scherr says, is part of this particular season of life. They’re figuring it out and documenting their experience along the way in an admirable attempt to show true parts of what they’re going through this season.

“I just want it to be my story,” said Pittman, who wants to continue the channel well after his football career as a way to document his journey. “And then my kids can look back at it and be like ‘dad loves mom a lot.'”