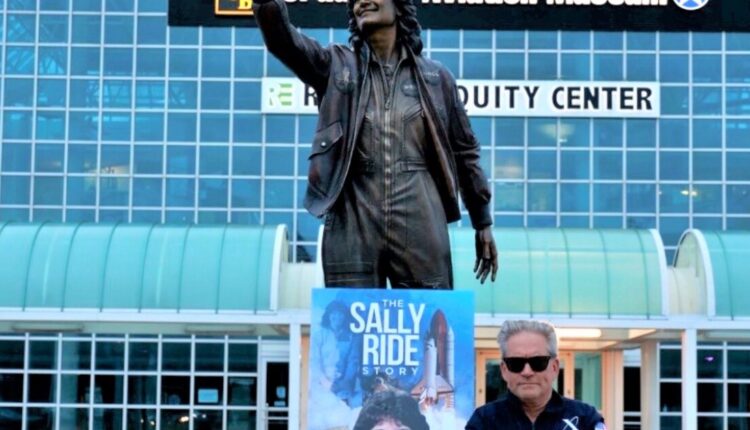 To further honor one of his heroes, Los Angeles filmmaker Steven Barber has set his sights on creating a San Diego monument to Sally Ride, an astronaut, La Jolla resident, UC San Diego professor and co-founder of Sally Ride Science who died in 2012 .

The statue, which would be the first on the West Coast to honor a female astronaut, is planned for the San Diego Air & Space Museum in Balboa Park.

The tribute is to be cast in gold and bronze, with Ride’s space jumpsuit painted in blue patina. It will stand 7 feet tall on a 5-foot pedestal and will weigh around 450 pounds, Barber said.

Get the La Jolla Light weekly in your inbox

News, features and sports about La Jolla, every Thursday for free

You may occasionally receive promotional content from the La Jolla Light.

In June, Barber unveiled a monument to Ride — the first statue of a female astronaut on the East Coast — at the Cradle of Aviation Museum in New York. Barber organizes its creation and placement; the monument itself was the work of Lundeen Sculpture of Colorado and artist Joey Bainer.

Ride, the first American woman in space, also was honored recently with the Sally Ride quarters in March 2021 and a portion of state Highway 101 in the west San Fernando Valley dedicated in her name in June this year.

The Sally Ride statue in San Diego would look similar to this one, with Ride’s space jumpsuit painted in blue patina.

The recent monument projects follow Barber’s creation of nine documentaries, many of which feature the military, after he finished three years of military school.

“I’ve lived on an aircraft carrier, I’ve been to Afghanistan, I’ve been a combat reporter. I’ve seen the sacrifice of these young people [made]. … I’m a big fan of the military.”

He’s also a supporter of astronauts. Barber’s father, a General Motors engineer, worked on the moon landing equipment, and Barber met Buzz Aldrin, Neil Armstrong and others as a child.

“Those guys are my heroes,” he said.

Barber transitioned from documentaries to monuments a few years ago when he realized monuments could reach more people, with hundreds visiting the statues each day.

His first monument was the Apollo 11 tribute. Soon after he established the Apollo 13 monument, Barber realized there weren’t any such honors for the thousands of women who have worked for NASA or the dozens who have flown in space.

He reached out to Ride’s life partner and Sally Ride Science co-founder Tam O’Shaughnessy, who said he was supportive of the monuments to Ride.

O’Shaughnessy and Sally Ride Science did not respond to the La Jolla Light’s requests for comment.

After the New York monument was installed, Barber said, “I always wanted to build [a monument to Ride] on the West Coast,” given that she was born in Los Angeles, graduated from Stanford University and taught at UCSD.

He said he hopes to raise money and build the monument by next June for the 40th anniversary of Ride’s first space flight aboard the shuttle Challenger. The New York statue cost about $300,000.

To help with the funding, email [email protected] ◆

16,000 Rounds of Ammunition Seized at the Hidalgo International Bridge