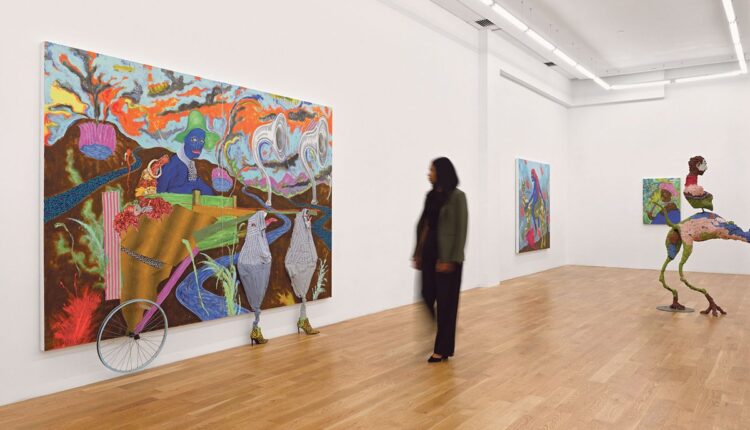 Los Angeles has been a natural place for New York merchants to start a second shop for decades. Pace and Luhring Augustine tried it at an early age, and more recently Matthew Marks, Michele Maccarone and Jeffrey Deitch have put down roots with the Swiss mega-gallery Hauser & Wirth and, next, David Zwirner.

Nowadays, however, the opposite is also happening, as galleries that have grown in California find the means and motives to open up in New York – supported to a certain extent by pandemic-adjusted real estate prices. In May, François Ghebaly opened a room on the Lower East Side with a group exhibition with long-time gallery artists such as Neïl Beloufa, Kelly Akashi and Candice Lin. In October, the Nicodim Gallery opened in SoHo to showcase the super-vivid, phantasmagoric paintings and sculptures by Cape Town-born, Los Angeles-based artist Simphiwe Ndzube.

And as the most famous move to date, David Kordansky is currently renovating a room on West 20th Street in Chelsea, with plans to show Los Angeles artist Lauren Halsey her first solo exhibition in New York this spring – before even bigger galleries sweep along with other Kordansky Artists like Mary Weatherford (Gagosian), Rashid Johnson (Hauser & Wirth) and Sam Gilliam (Pace).

“It makes a lot of sense to start with Lauren,” says Kordansky. “She has this incredible moment when she has the serpentine [Galleries, in London] and all these institutional exhibitions that take place outside of Los Angeles. “

That way, the opening of the Los Angeles galleries in New York isn’t that different from the reverse scenario. An expansion on the coast allows galleries to plan more exhibitions overall, attract more attention to their artists, learn about a different collection of local collectors and museums, and in the case of sought-after artists like Halsey, a valuable monopoly in the North American market. But the number of galleries in Los Angeles heading east these days also reflects their success in the artist discovery business and their desire to be more than a stepping stone for emerging artists.

Mihai Nicodim, who opened his gallery in Los Angeles in 2006 and a branch in his native Bucharest in 2012, has built a reputation for introducing sophisticated and sometimes gnarled-looking new art with an initial focus on Eastern Europe. “We have an amazing group of young artists, most of whom have never shown in New York,” he says, citing Isabelle Albuquerque, Mosie Romney and Devin B. Johnson as examples.

“Simphiwe is the cornerstone of our young program: In a way, it is the calling card when we want to meet young artists,” says Nicodim director Ben Lee Ritchie Handler. He said of the October show that it was sold out before the opening: “Simphiwe has a waiting list that goes on for miles.”

Ghebaly also said that several artists in his program – including the Los Angeles painter plus Sayre Gomez and the Franco-Algerian multimedia artist Neïl Beloufa – had not yet been represented in New York, although he ironically noted that some of his artists were from New York gallery owners were recruited as soon as the news of his place got around.

Ghebaly says he was considering expanding into his native France, but New York caught on in part because of the quality of the institutions and collections there. “I think the move gives us the chance to work more closely together and be in more constant dialogue with the best institutions in the country,” he says, adding: “Selling art isn’t difficult at the moment, it’s more about who “We want to sell.”

Traders tell The Art Newspaper they believe the effects of the pandemic on commercial real estate have made the east coast outposts financially more viable. “We found an incredible real estate opportunity and took advantage of it,” says Kordansky.

“I didn’t really know about New York real estate, but it was a manageable business since we moved earlier [during Covid]“Says Ghebaly.

Or, as Nicodim put it when asked whether he found the prices for the pandemic era more feasible: “I’m told that. Everyone has told me that there are great opportunities in New York. [But] I do not know. New York isn’t cheap, but our gallery has grown so we’ve been able to expand. “