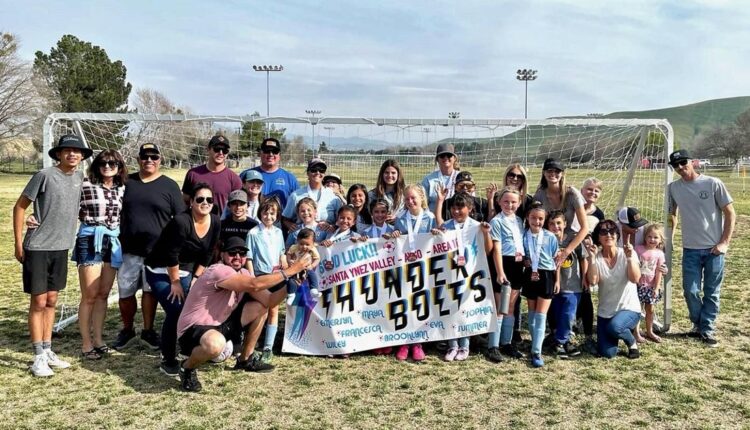 The girls then placed first in the AYSO Area Q Tournament, which was played in Lompoc. The squad came in first among a total of eight teams. Out of eight teams I believe.

Then the team placed third in the AYSO Section 10 Tournament in Bakersfield this past weekend, competing in a 16-team field. Section 10 stretches from the San Fernando Valley all the way to the Yosemite Valley.

The team played five games in Bakersfield and went undefeated nearly the entire season before the girls lost on Sunday to come in third place.

Hancock College has organized a fundraising golf tournament this spring.

Registration for the event opened on Feb. 15 and space is limited.

Teams of four will play 18 holes of golf at the Santa Maria Country Club. Appetizers will be provided on the course, along with additional snacks and drinks available for purchase during play. Later in the day, join the Bulldogs for dinner and a viewing party at the clubhouse as they host the NCAA National Championship Final Four basketball game on television. All participants will have the opportunity to enter a raffle throughout the day for a chance to win a pair of VIP tickets to the 2023 NCAA Basketball National Championship.

Registration can be completed at the Hancock College athletics website.

The Bulldogs (15-11, 7-4 WSC) led wire-to-wire in the contest while a swarming defense hero Pierce (2-18, 0-12 WSC) to zero points in the opening frame. The victory keeps coach Cary Nerelli’s squad in third place among the northern foes in the Western State Conference with one game remaining in the regular season. Prior to the start of the game, the Bulldogs honored the 2022 sophomore class which included Jayci Bayne, Jewelia Maniss, Kayla Taylor, and Jessika Earley.

For just the third time this season, all competing players for AHC registered points in the box score after the full team effort. Bayne had a career-high night after pouring in 35 points, including six shots from long range. She also stuffed the stat sheet by adding six rebounds, five assists, three steals, and one block. Taylor anchored the Bulldogs on the inside with 14 rebounds and a season-high mark of 20 points en route to a double-double showing. Earley set a career-high mark after dishing out nine assists while Maniss tackled on nine rebounds.

A hot shooting night and a total team effort on offense led the Allan Hancock College men’s basketball team to an 83-72 victory over LA Pierce College on Friday.

The Bulldogs (16-8, 8-1 WSC) won their eighth-straight game as they sank seven three-pointers and shot 51.0 percent overall. Tonight’s victory leaves Hancock just one game out of first place in the Western State Conference behind an undefeated Ventura squad. Prior to the game, Coach Aye’s squad honored the 2022 sophomore class which included Bryce Craver, Shawn Kelly, Kaleb Mack, and Amari Stroud.

Hancock built a 10-point cushion through the opening five minutes of action, but the Brahmas (12-15, 3-9 WSC) chipped away at the deficit to take the lead with three minutes remaining. A back-and-forth affair saw both teams trade baskets through the remainder of the half, but Matt Solomon’s buzzer-beating shot from distance gave the Bulldogs a one-possession advantage at the intermission. Level play for both sides continued in the second half until the home squad broke away by rattling off a 14-0 streak midway through the frame to put the game out of reach.

Solomon led the Bulldogs with a 28-point performance, which included five made three-pointers, and tackled on six rebounds. Kelly also had a night after registering a 21 point, 15 rebound double-double showing. Vondre Chase rounded out the top scorers by chipping in 11 points while Craver dished out a team-high mark of seven assists. Craver and Kelly also recorded three blocks apiece on the night.